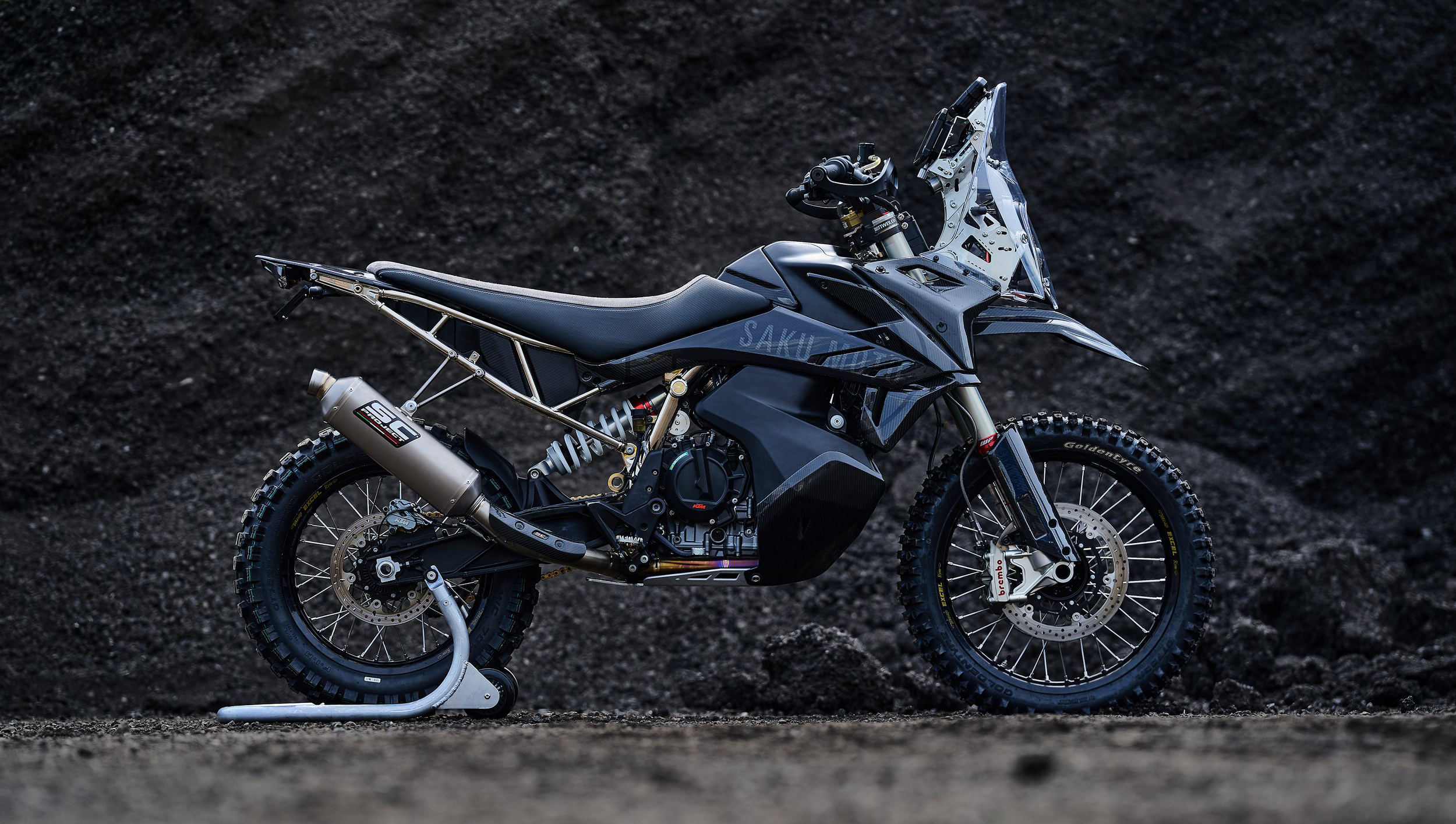 It wasn’t that long ago that the mention of KTM simply meant one thing, dirt bikes, but the rise and rise of the Austrian manufacturer has seen them now sell as many street bikes as off-road machines, and their commitment to motorsport looms large from Supercross to the Dakar and the bright lights of MotoGP. It’s a cliché, but the winner’s really have been the customers, and if you want a motorcycle in 2022 that will literally go anywhere and put a smile on your dial, the KTM 890 Adventure R is it. Racer, tour guide and bike builder Gregor Halenda agrees and his was supposed to stay stock, but with two months to go before the One Motorcycle Show in his home state of Oregon, the owner of Saku Moto changed his mind and his custom R is simply incredible.

“What you’re looking at is the result of my ability to fully embrace a project while simultaneously dismissing the amount of work involved. It’s one of my superpowers,” Gregor laughs. “I needed a new motorcycle for the tour business I started this past year – something modern and reliable, fast and light, a long-distance adventure bike for exploring Oregon’s back country. I chose the lightest, most powerful twin there is – the 890 – it’s the perfect bike!” But the bike builder in him couldn’t leave the 890 stock for long and having always used the One show as an incentive to finish each build, it was with two months left before showtime that the KTM got torn down.

“I knew two things going in: I wanted a rally tower to give me better wind protection and lighting, also the look is fantastic; rally bikes are pure function and that’s beautiful. The other was to get rid of all the colour.” That alone will help a KTM to stand out, purging it of the orange, and taking inspiration from his own Rickman and Champion framed Penton, it was decided the trellis frame would get a nickel-coated finish. It looks incredible and matches the soft gold anodising on the suspension, which is now seriously trick being the epic WP XPLOR Pro package. As for the rolling stock, it’s narrower wheels from “Dubya so I can run my favourite Golden Tyre 723Rs.”

As ideas swirled around, with the image of a blacked out 890 in his mind, Gregor thought about the contrast, parts that wouldn’t carry any colour at all; that front rally tower was next! “The design of the Aurora tower impressed me but the owner, Dimitri, impressed me more, so I reached out to explain my idea: I wanted to build a bike that shows off the tower’s structure – can you make me a tower in unpainted aluminium?” Clearly, the answer was yes, and with the clear screen, Tripltek GPS tablet giving an enormous display and the repositioned dash, the result is form and function at its finest.

More of Dimitri’s work would follow, “When he shipped the tower, he sent quarter panels in carbon fibre because he had just started working with Papadakis Carbon and was excited about the part.” In search of more carbon fibre parts, Motocomposites came through with their stunning work and uniform weave and shipped from Canada some fenders, fork guards and a battery cover. “I mentioned to Dimitri that the only parts I couldn’t find were the side and inner fairings.” The problem was there were now only two weeks until show time, Dimitri’s response was simple, not only would he make them in time, he’d even match the carbon weave of the other parts.

You can imagine that Gregor must have had his doubts, but there was no time for any of that with a bunch more work to do and time running out fast. The thumping twin-cylinder engine is improved thanks to a high-flowing and gnarly sounding Rottweiler intake. The roar from which is only surpassed by the sweet symphony from the SC-Project titanium exhaust. The Renazco seat goes on next and is a thing of beauty, and is also easily removed with a quick-release system that Gregor made himself, machining a cool little lever that is neatly hidden.

The high narrow seat and lower exhaust system mean plenty of soft luggage can be hung from the bike, a preference for many adventure riders, it doesn’t crush the rider if you take a spill like hard cases can. The addition of a laser-cut skid plate from Ian Chappell and a set of Highway Dirt Bikes hand guards add more protection, this time for engine and rider. Friend Ben was on hand to help with the huge wiring loom and to make sense of it all, while Chris and Brandon at UpShift sorted out the graphics, which now had to be clear with the extra carbon on the way, so the weave could shine through.

With literally hours left before the start of the One Show, those final pieces from Dmitri arrived. “My friends Andy DiBrino and Isaac Siegl helped apply the clear graphics. Friday morning I’m the very last bike to roll into the show. The finished bike far exceeds my original vision and much of that is thanks to Dimitri and Aurora. Not only am I’m thrilled with the look, but the largest One Show crowd ever felt the same way as the bike was awarded both of the ‘People’s Choice’ awards.”

We could never list all of the parts or modifications, but Gregor says it’s nearly ready for adventure, “then it’s going to get dirty, scratched and abused… I can’t wait.”