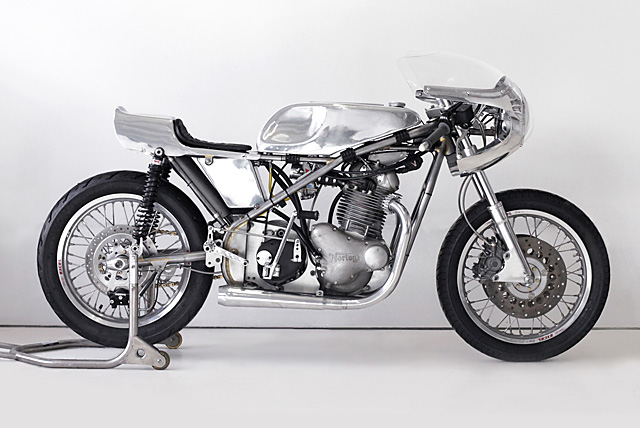 If you could place a value on a motorcycle there may not be another bike on the planet worth as much as this Seeley Norton Commando. Not just because it’s a Seeley Commando, the frame made on an original Colin Seeley jig in the traditional way with all the very best parts and materials used throughout the bike. But because the proceeds of the sale of this motorcycle go to supporting Worth Motorcycles, a not for profit organisation, based in Crown Heights, Brooklyn that teaches at risk youth the art of building custom motorcycles and mentors them towards a better life. Founded by Jeremy Malman a former club racer whose doctoral studies focussed on the various mechanisms underlying adolescent antisocial behaviour, he’s created a place that not only changes lives but turns out some of the coolest bikes in North America. Many of us come to bike building and even just riding on two wheels as a form of therapy, even if consciously we don’t see it that way, whether you’re firing through the twisties or laying down a beautiful bead there is a meditative state that seems to occur when man and machine become one. Informed by his research about the role educational experience plays in adolescent antisocial behaviour, Jeremy found that these struggling students from educationally under-served charter schools significantly benefit from a setting that’s laid back, yet still professional and focused, where they have trustworthy mentors they can dialogue with, and access to an outlet to process the troubles they may not otherwise share. The net result is happy and healthy kids, guided via intellectually and emotionally stimulating vocational training, that sees these youth gain the experience they need to meet the growing skills shortage of well trained builders and fabricators and churn out incredible machines like this Seeley Commando known as Time Lapse. The bike is a collaboration between designer extraordinaire Sebastian Errazuriz, NYC Norton and the legendary Dick Gambino but it all starts with a Seeley MKII frame that has been constructed by Roger Titchmarsh; the only man authorised by Colin Seeley to replicate the Seeley chassis. The jig holds the 17 gauge Reynolds 531 tubing in an inverted position but to allow for easy welding the whole thing can be rotated like a rotisserie. The head stock is thick 8 gauge CFS3 BK tube with the main frame loops CNC mandrel bent by Pipecraft in the UK, a modern touch to the classic process. The tubes are joined by hand Bronze welding with oxy-acetylene, including a gas-fluxer, and Sifbronze 101 Manganese Bronze filler. The box section swing arm pivot mounts are mild steel, single sheets that are folded over to form the box section with the welds to join it to the frame simply to die for. The subframe is then crafted with seat and shock mounts and the swingarm fabricated in a separate jig. Of course the whole process is much more complex than can be described in one article but it is done in an exacting and precise manner from start to finish. The frame itself is a work of art and given the quality of brazing all involved decided to leave it unpainted. Which requires the occasional rub down with Scotch-Brite and WD40, a small price to pay to keep it in the raw, but you wouldn’t sling a cupboard full of clothes onto Monica Bellucci either! With such an incredible frame to begin the project it was over to NYC Norton and Kenny Cummings and the crew to put together one hell of an engine. The build process starts with Steve Maney racing cases that have been machined to take the Colorado Norton Works breather setup, which virtually eliminates leaking on Norton motors by creating negative pressure in the crankcases. Alloy cylinders come from Steve Maney too, weighing in almost 12lbs less than standard Norton Commando barrels. The barrels are 850cc bore that are sleeved down to 750, this allows for the use of an 850cc head, which has a wider bolt pattern than 750 heads and allows more room for overbores in the future. Inside you’ll find a set of custom JS Motorsport pistons that are made by JE in the standard 73mm bore weighing a third less than the factory slugs, reducing both the reciprocating mass and vibration. Compression is a horsepower friendly 11.5:1 with “gapless” rings fitted to reduce blowby and prevents heat & corrosive gases from entering the crankcase. Like all good classics the engine is fed fuel the old school way with Keihin’s responsive FCR getting the job done. Spent gasses exit via individual header pipes into a pair of stunning polished mufflers that run parallel to the bottom frame tube. All that power is handled by the stock Norton Commando diaphragm spring clutch, with 5 Barnett friction and 5 stock steel plates. While keeping wiring hidden and the electrical simple is all helped by a Total-loss setup with an Antigravity 4600 lithium battery which weighs less than a kilogram. Built for the Salon 94 at Art Basel Miami and later displayed at the Carnegie Museum of Art the journey to motorcycle nirvana continued with another of the best in the business, Dick Gambino, creating the stunning body work. An old school shaper and fabricator Dick is quite simply an artist whose medium is metal and polished aluminium is his master class. The seat and front fairing give the racer look, with minimalist padding in black and clear screen allowing the metal of the motor, body and frame to remain the pure elements. But it is the gas tank that is the pièce de résistance, it’s flowing, unbroken lines only interrupted on the top of the tank by a taxidermied bird resting inside a glass vestibule that is embedded into the gas-tank. “The bird is intended to represent the fragile and often precarious balance between freedom and death- a notion never more present than when one is riding a motorcycle,” explains Jeremy. Even the smaller details of the build haven’t been ignored, the rearsets beautifully fabricated and fitting the race theme of the bike, while the kickstart reminds you of the classic era this machine hails from. The neat clip-ons sit perfectly on the forks cutting a clean line where the frame tubes meet the headstock and fitted with a Tomaselli Twin-Pull throttle add another racing element. The polished front forks hold the calipers for the twin disc setup, while out back adjustable shocks keep the rear end planted with a single disc and low slung caliper. The rolling stock is all business with lightweight Excel rims laced with spokes to the hubs and all wrapped up nicely with Avon rubber. There is just a single headlight to shine the way down life’s new journey and a Scitsu Racing Tacho giving the only information, the rest you have to do by feel and intuition.

Pictured in its finished form it’s not only a remarkable motorcycle built to an incredible standard it’s a testament to NYC Norton and all involved in providing much needed support to young people like Kevin, Rey, Jared, Reynold and many more from Brooklyn so they can be given a chance to shine. Jeremy, along with a small group of sponsors and the organisation’s board of directors, have bootstrapped the project from the beginning, but this, of course, is not a viable, long-term model. In order for Worth Motorcycles to continue to carry out its mission and to be able to serve more students, the time has come for the organisation to launch a formal fundraising campaign. You can support this incredible initiative and ensure the future of bike building is in good hands by helping out Worth Motorcycles and the kids from Crown Heights by giving a donation big or small right here. It’s an investment in their lives, in a creative and therapeutic environment and in the future of hand crafted custom motorcycles.