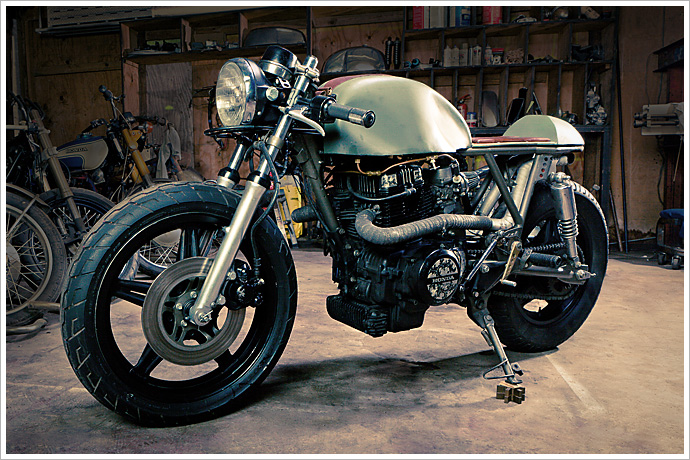 When you get down to brass tacks, being a bike customiser really is all about the metal. Whether you’re welding it, grinding it, or shaving it off on a lathe, it’s the way you use it that makes or breaks a great design. Some like it seamlessly smooth and reflective like a B-29 bomber. Some like it matt black like a charcoal cat hunting in the night, and some prefer it rough and corroded so it looks like it’s 1000 years old. But which ever way you cut it, the more you love it and understand it, the better your handwork is going to look. Retro Moto’s Junior Burrell is a guy that clearly loves the stuff, which was immediately obvious when we first saw this, his latest build. The wealth of intricate details, handmade parts, and array of different patinas says it in spades. If you love metal, we’re guessing you’ll love this bike. Here’s Junior. “I am a fabricator from Fort Worth, Texas. I run a part time motorcycle fabrication shop called Retro Moto. It’s a single man shop and I specialize in hand forming steel tanks.” “I am inspired by an old man craftsman that didn’t have technology at their disposal. I chose to build motorcycles because the options and possibilities for creativity are endless. I build to be able to transform raw steel into art.” “The bike is a 1981 CM400; I purchased it the day after my previous build was stolen. It was just frame, wheels, and a locked up engine. I was able to find an ’82 450 with a six speed, so it was purchased also. Since I was building it for myself, I wanted to make as many of the parts as possible.”

“These bikes are not popular because of the shape of the sub frame, so I chopped it off and built a more aggressive one. The hand formed steel tank is inspired by old Italian race bikes.” “I built the tail to follow the lines and the seat is wood base with leather pads. I freshed up the engine and had the head ported and polished. The clip-ons are tach and headlight brackets are all connected and are one piece.” “A couple of buddies of mine talked me into building the pie cut under tail exhaust, and I’m glad they did. The rear sets are composed of the original engine’s oil pump and a pocket bike transmission. The bike is a blast to ride and do so every chance I get.”