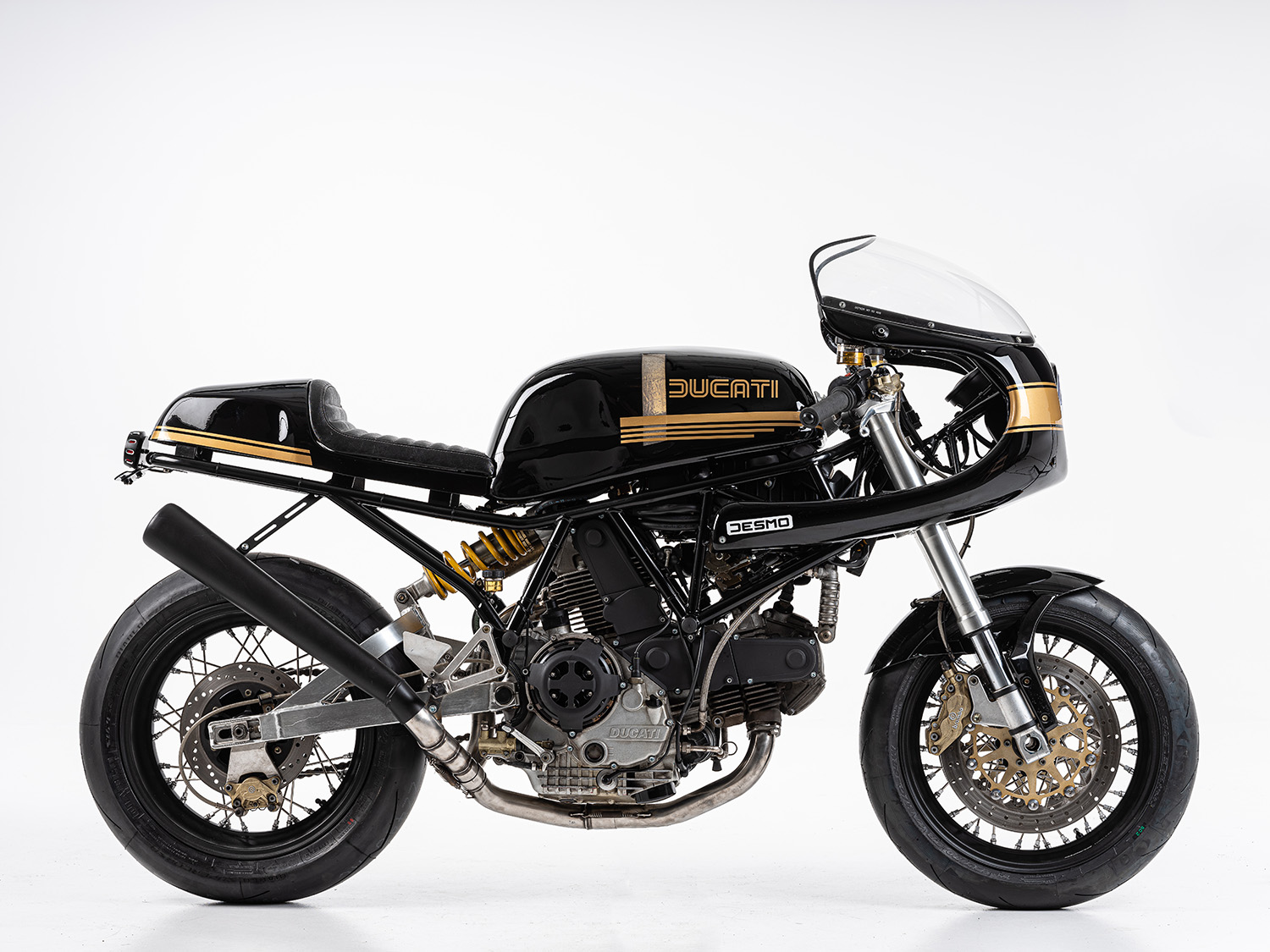 You might meet the nicest people on a Honda, but if it’s passion you’re after then look no further than Italian marque Ducati! The Ducatisti take things to a whole new level, even holding an annual World Ducati Week, so if you’re building a custom from a Duc then there is an extra layer of pressure. But Sven and his team at Belgium’s Barn Built Bikes were more than up for the challenge and showing their confidence decided to debut the finished product at the Motor Bike Expo in Verona, Italy. The end result is this stunning mix of old and new, a Ducati 900SS built to be a Darmah replica. 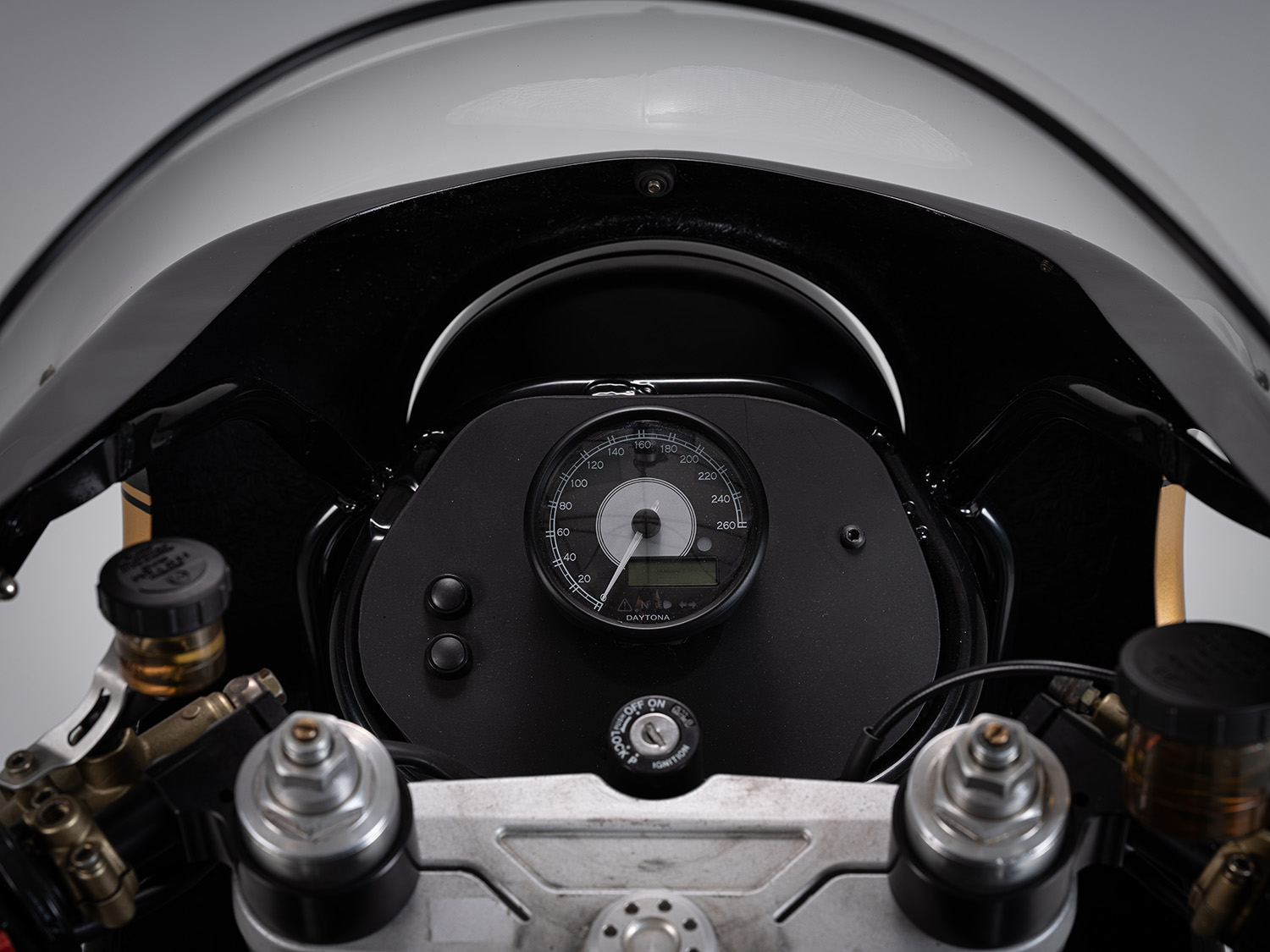 “In October 2019, we decided to participate at the motorbike expo 2020 in Verona. We didn’t want to show bikes that we already built for customers. We wanted to show our idea of a custom bike. Italy means Ducati and we still had an SS900ie donor ready in the barn,” Sven explains. But this wasn’t BBB’s first Ducati dance, having already built other SS models into Cafe Racers, one with a gorgeous tricolore paint scheme. 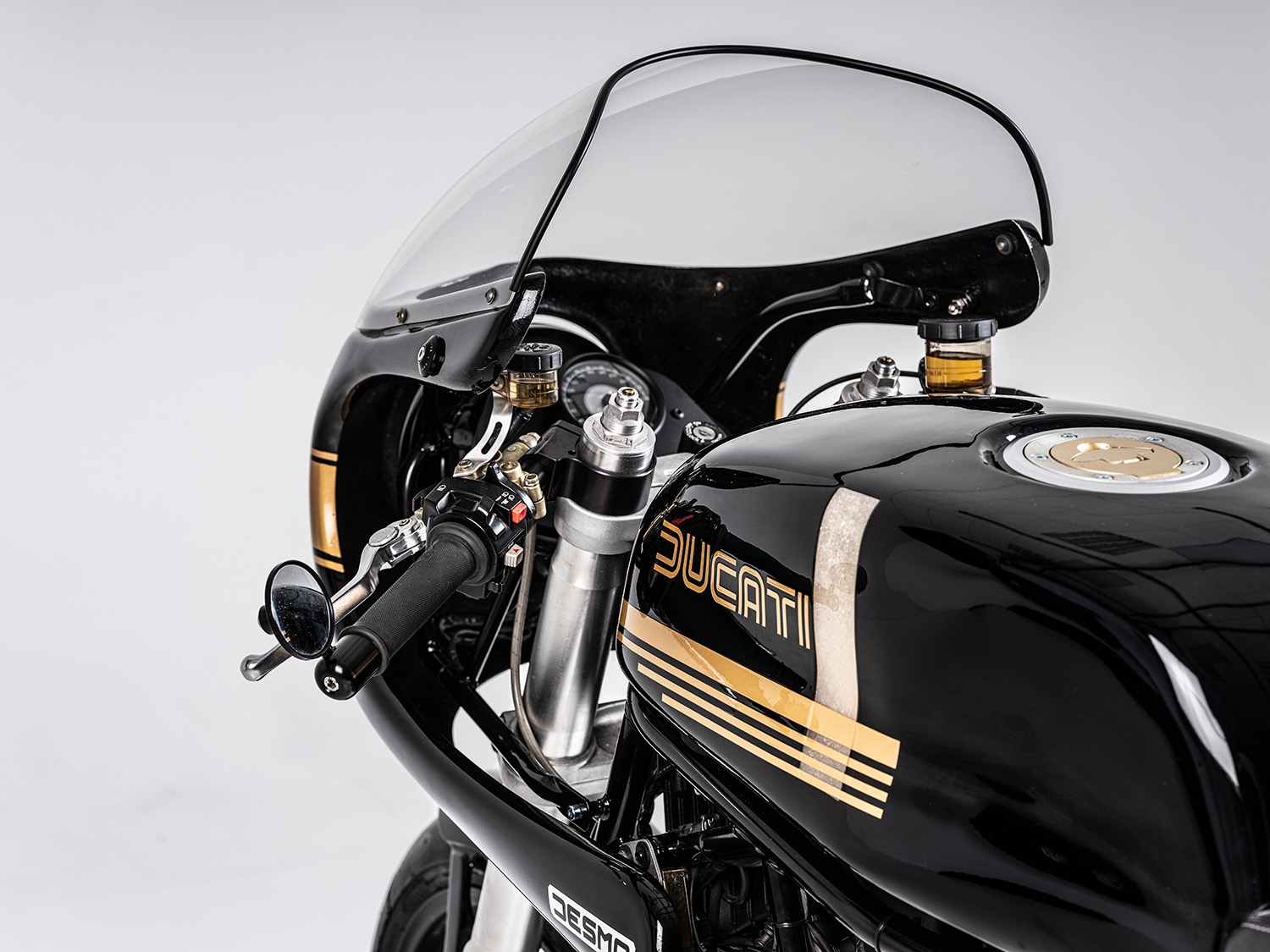 Pipeburn editor Scott was on hand at the MBE in Verona and Sven detailed the philosophy behind the bike “because we like to refer to the past in our builds, we decided to make a replica of the 1978 SS900 Darmah. The fairing and seat are still available and we still had one fuel tank in our shop.” But that tank is no ordinary item, made in house it is a lightweight polyvinyl construction, with a see-through strip on both sides to see the fuel level. It also retains the factory fuel pump, recessed filler cap and sits perfectly over the stock airbox. 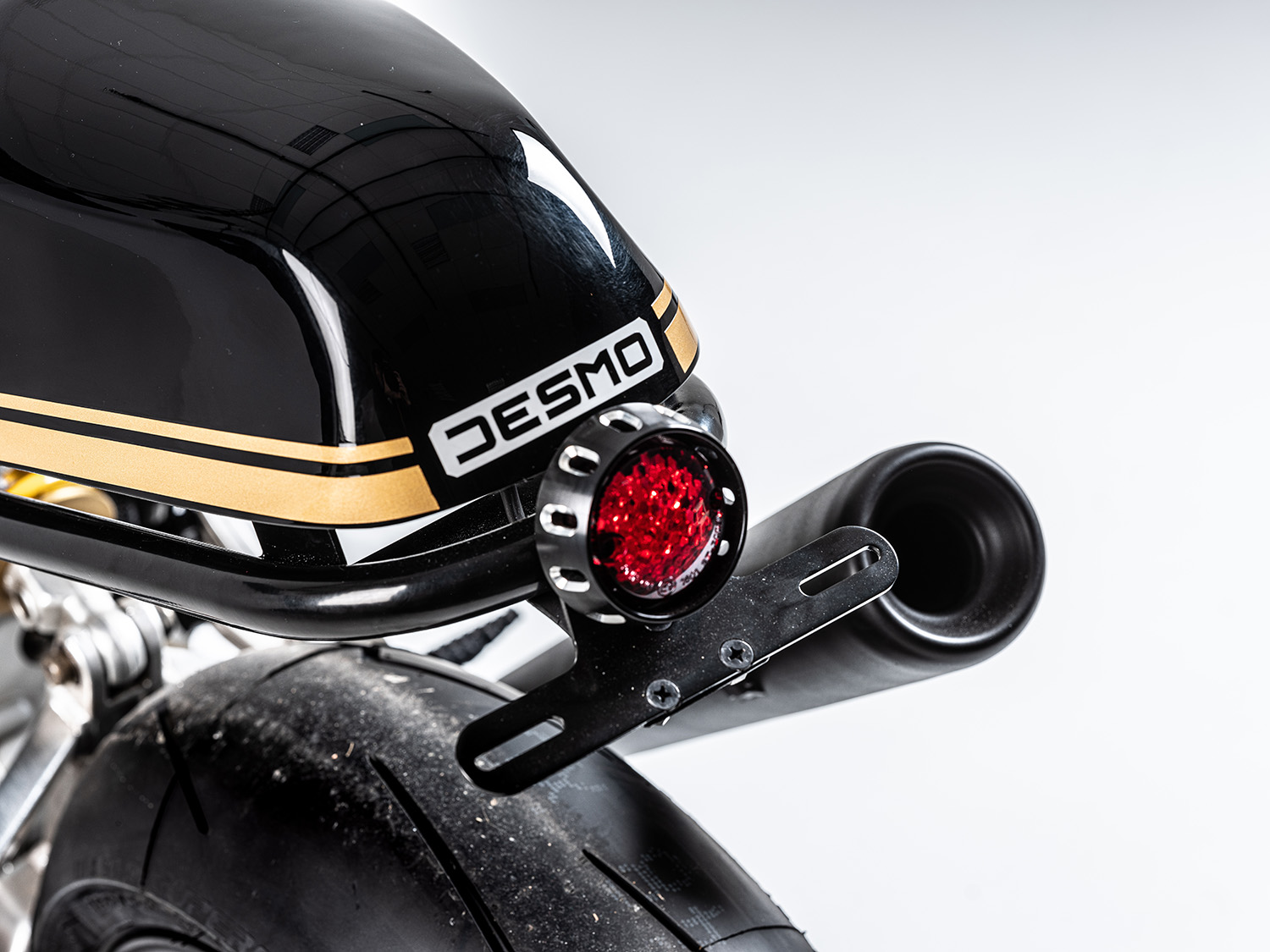 To match, the old school style seat design was the perfect complimenting feature, but anyone who has worked on the modern SS knows that the subframe is not at all conducive to a seat change. So rather than trying to rework it, the BBB crew simply cut it off and built up an all-new tubular rear section from the centre posts back. To match the lines of the tank, raised supports are used under the seat base and then it’s topped with the perfectly trimmed seat. 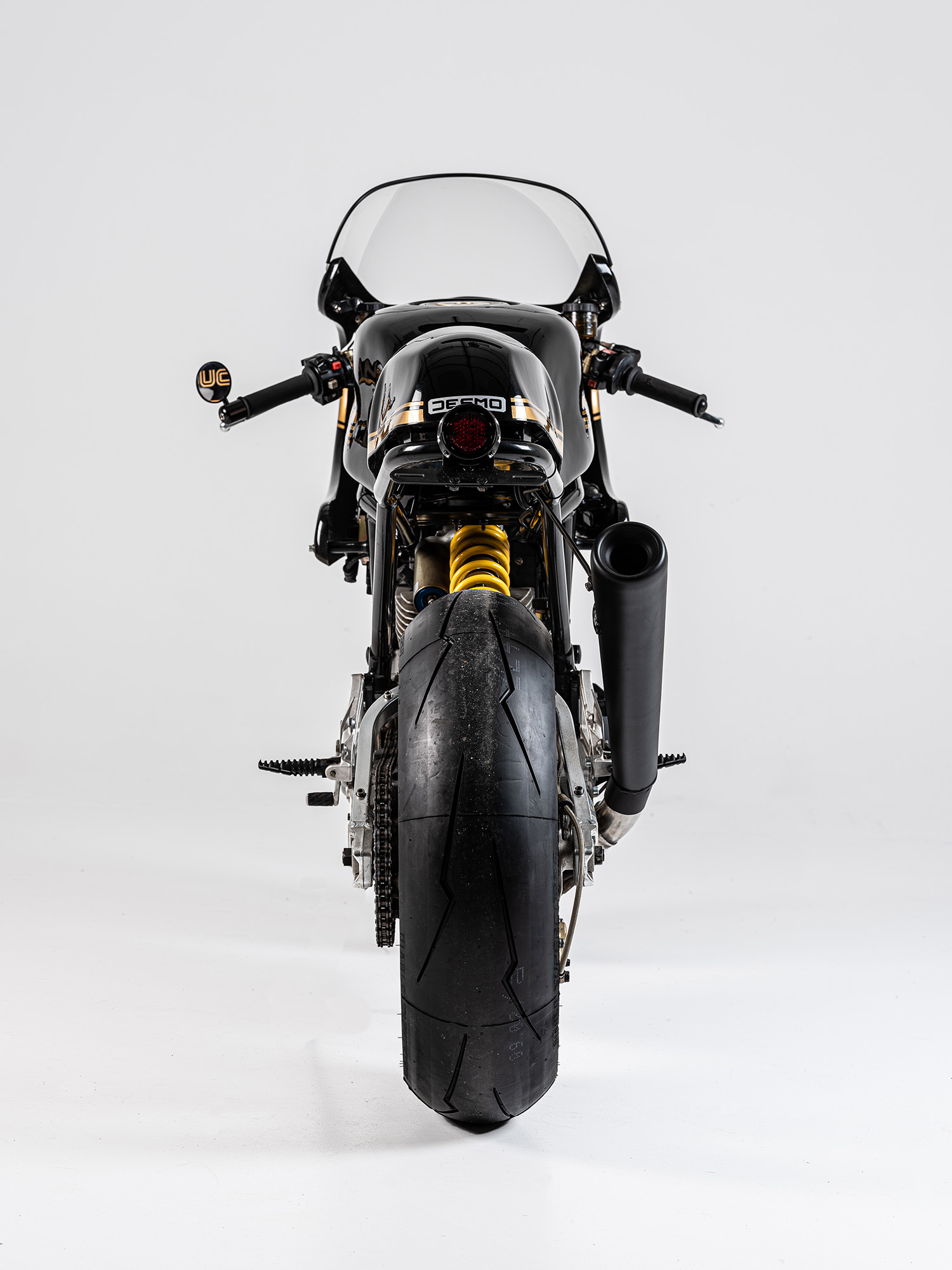 Moving to the front and while the modern SS comes with a front fairing stay, it needed to be totally redesigned and customised so it could support the classic ’70s unit and round headlight to match. Then it was time for paint and the quality is first class, the gorgeous deep gloss black perfectly accentuated by the gold graphics. With the Desmo decal added for good measure and the BBB shop logo on the stock front fender. 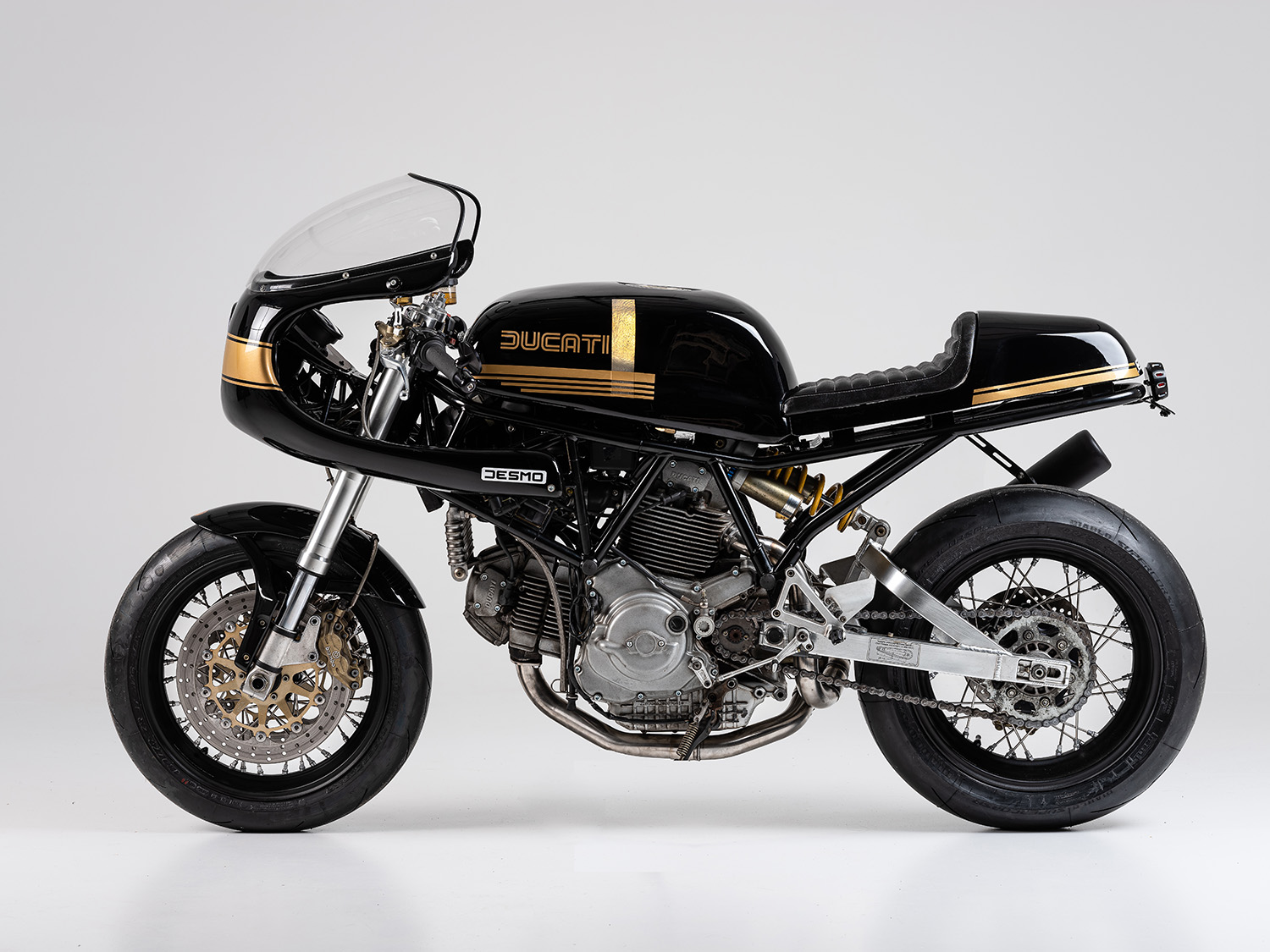 To get the bike into rolling form Sven went with a shop favourite, a set of spoked Alpina wheels with blacked-out rims, all wrapped up in sticky Pirelli rubber. The swingarm has been rubbed back to show off the raw metal finish, with the same treatment given to the heal guards. The suspension remains as it came from the factory and while not the latest and greatest, the combination of the exceptional frame working with the fully adjustable Showa forks and shock makes for a great ride. 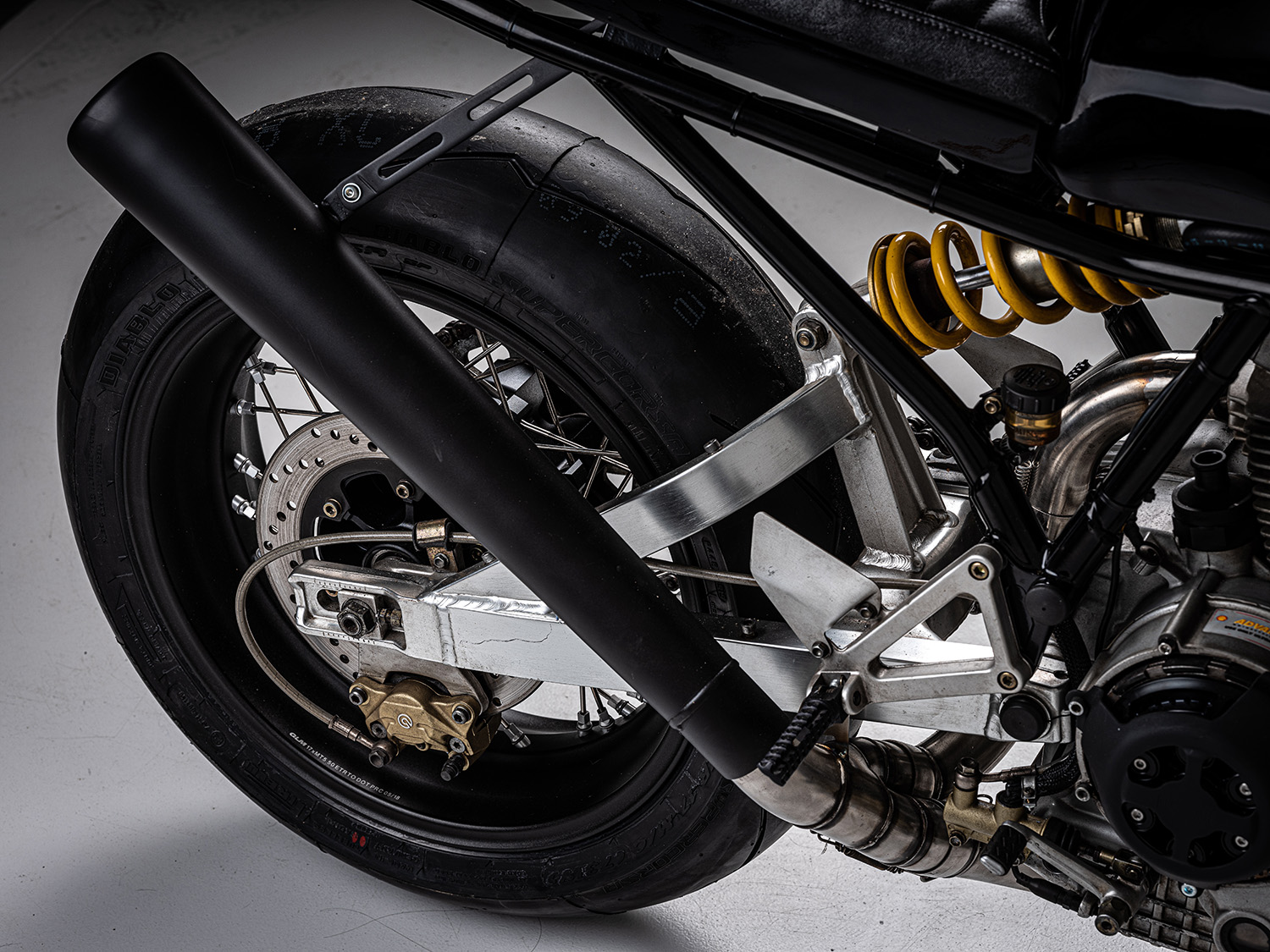 The factory braking is just as good and with less weight to stop, the full Brembo package with braided lines has an even easier task. But that didn’t stop Sven from making some upgrades with a set of Magura reservoirs. They form part of the ultra-clean cockpit with a custom dash supporting a centralised Daytona speedo. The clip-ons are then replaced with a pair from TRW, with new grips and refurbished switchblocks. 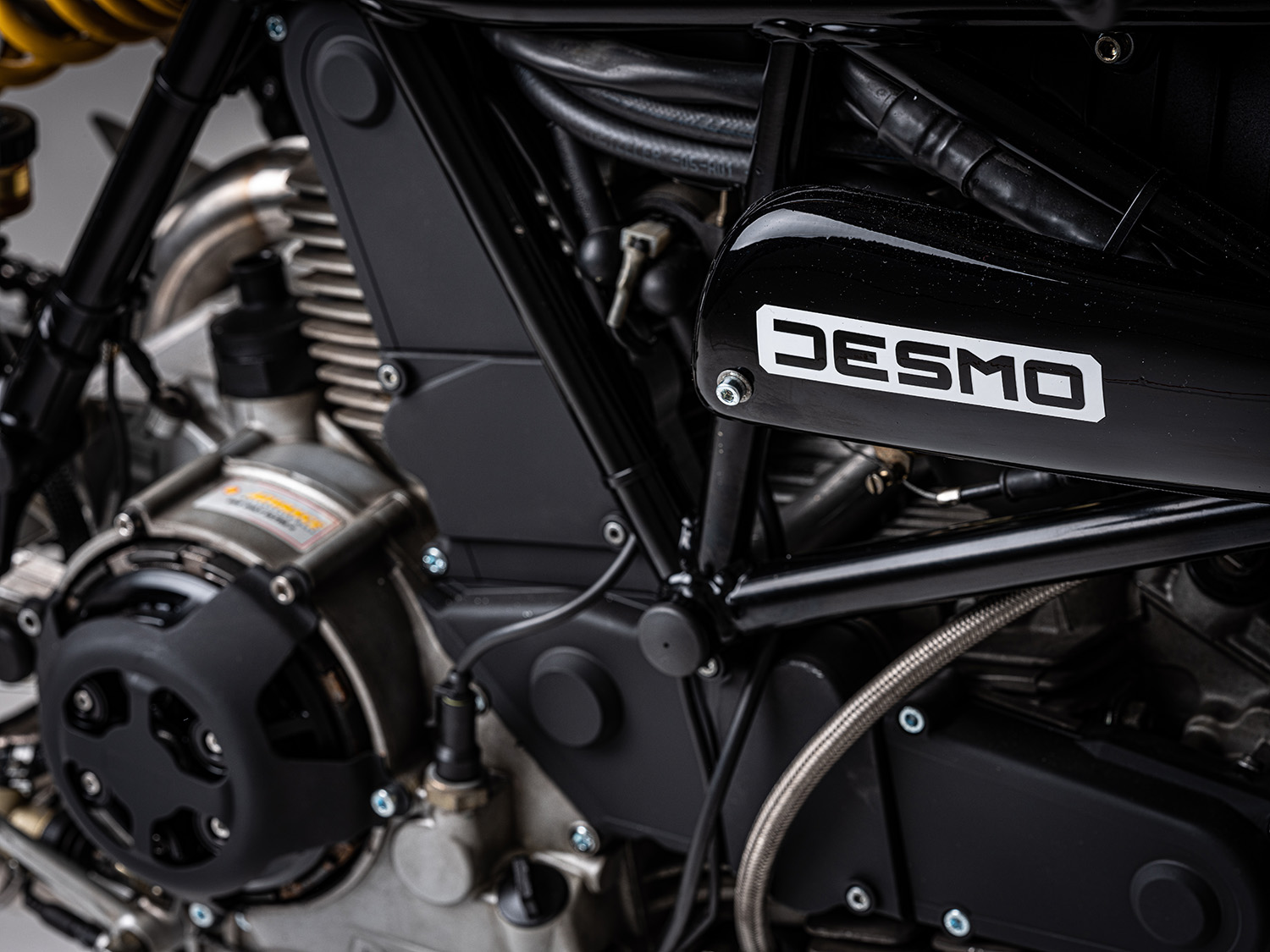 To ensure the 900cc L-Twin could show off its best features a custom dry clutch cover was fitted and the crew pulled a Ducati custom exhaust off the shelf. But the 2-1 system was originally designed for a Monster and needed some fettling to fit. But there were some tense moments at the end, with the wheels only arriving on the Monday and seat and upholstery by Cuirconcept on the Wednesday before the show. Thankfully all was finished in time and the Barn Built Bike was a hit, “In Verona we had really nice comments on the bike. Older bikers said we did a nice Job. Non-Ducatisti thought it was a genuine old one. Even Mr Martini himself came to us to say we made nice bikes,” a smiling Sven and a happy crowd! 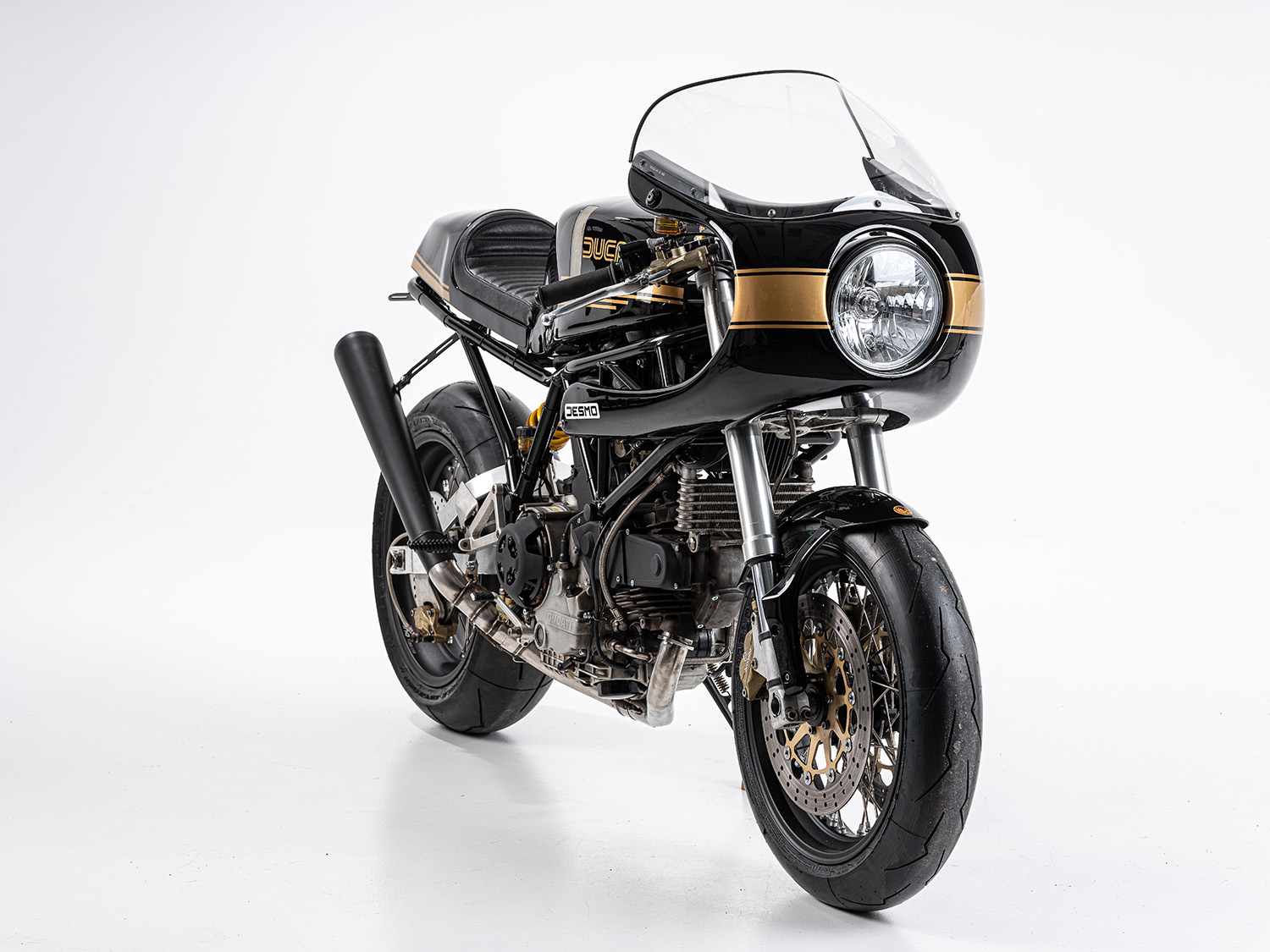 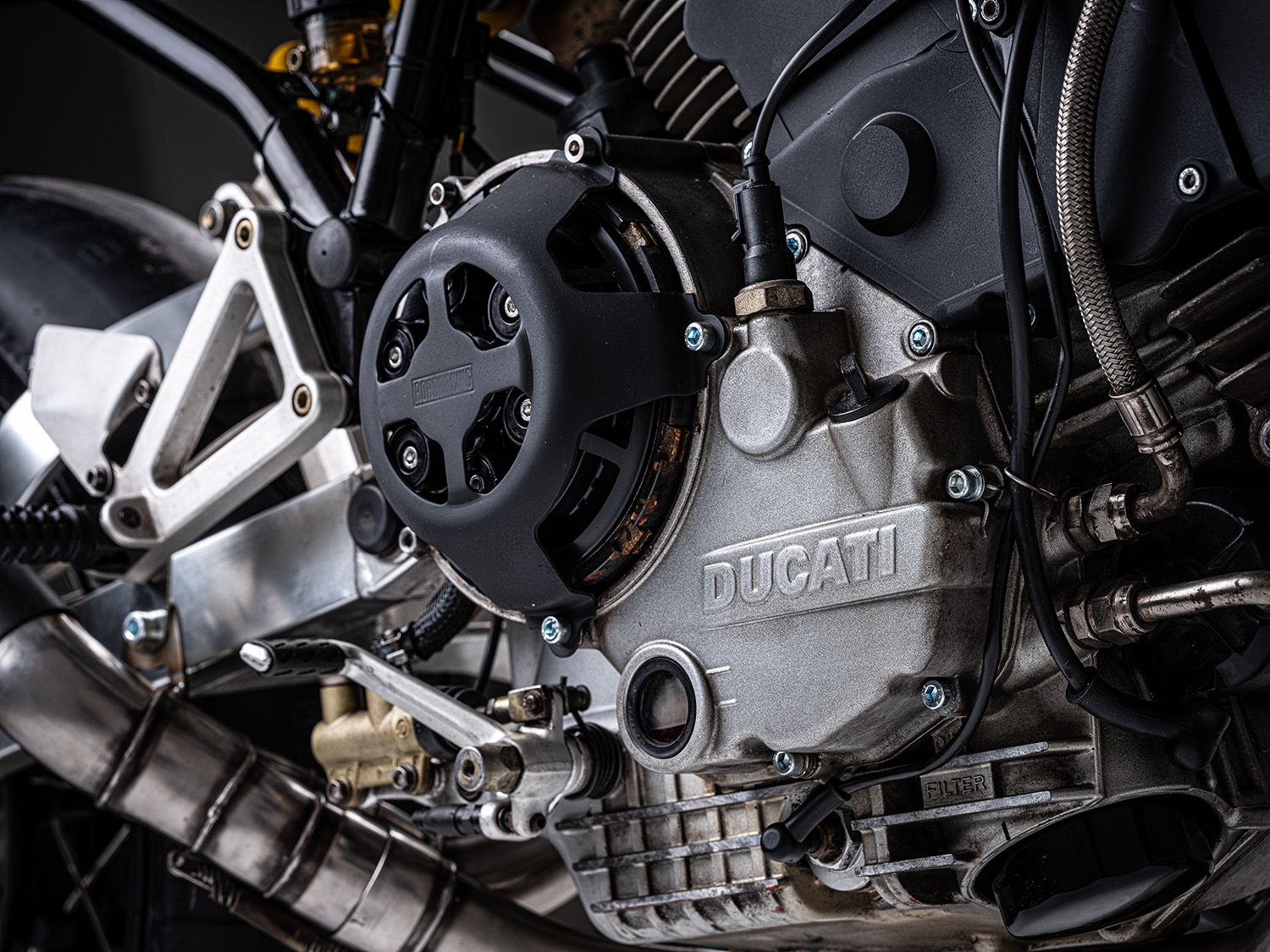 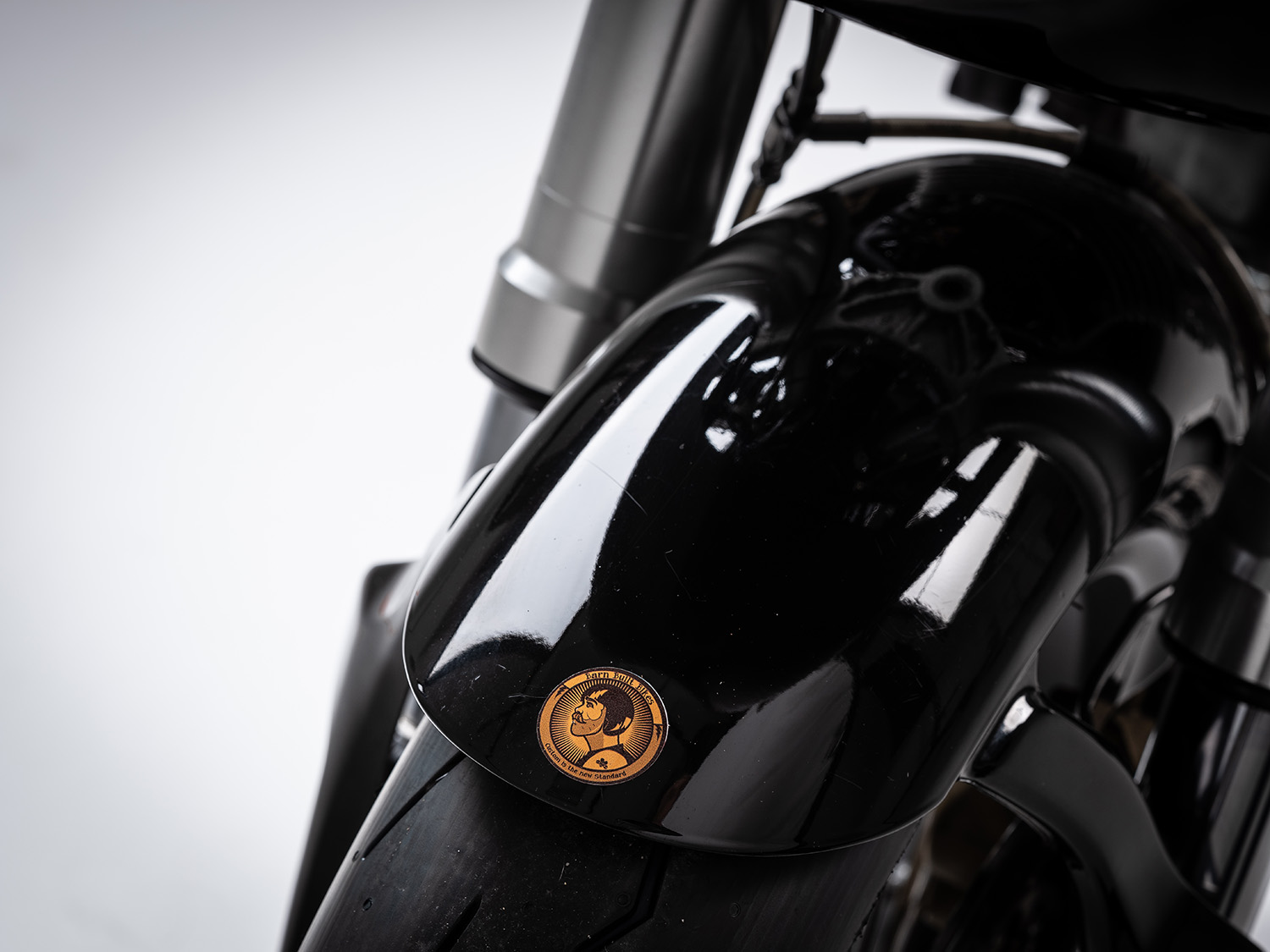 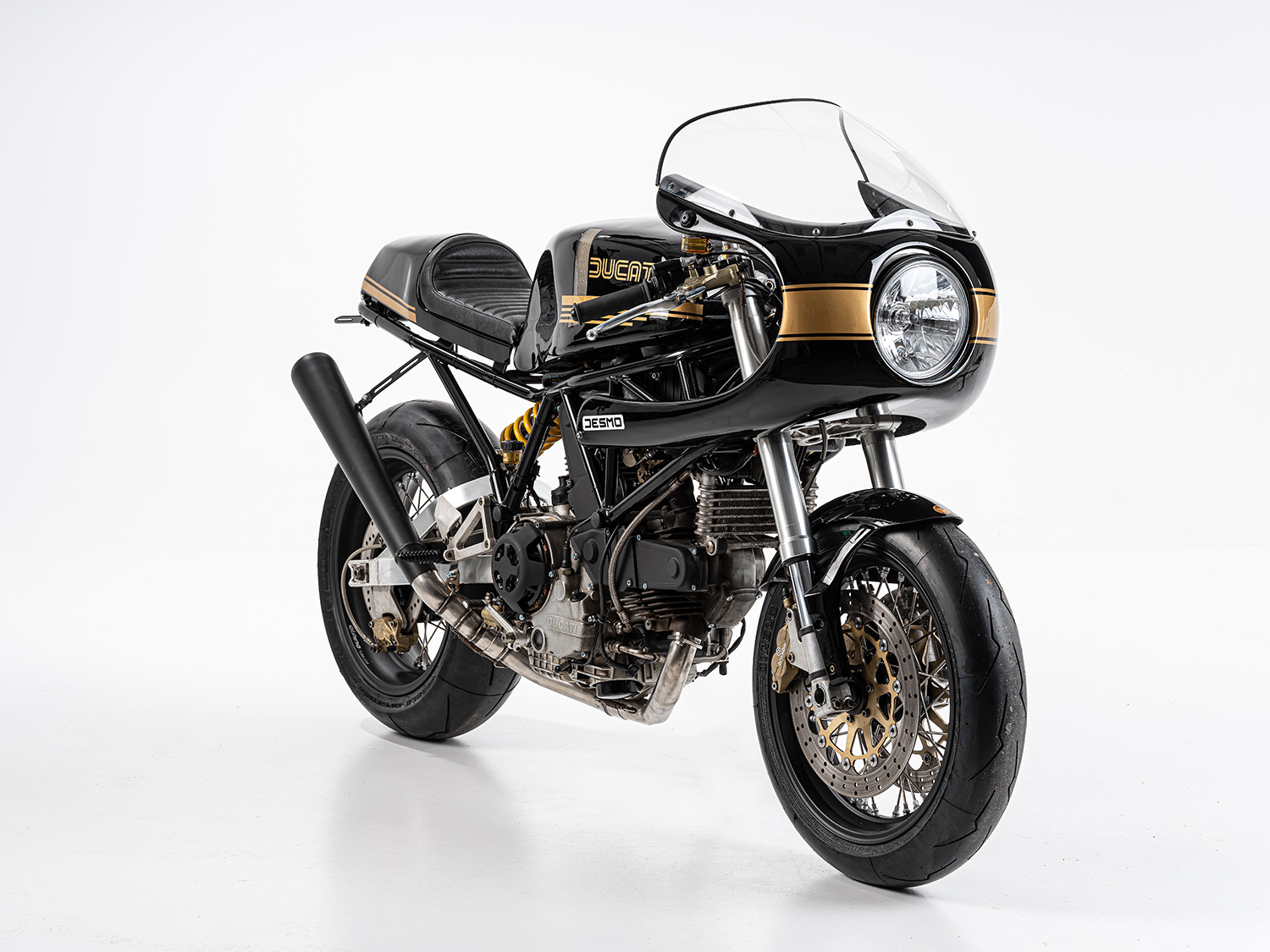