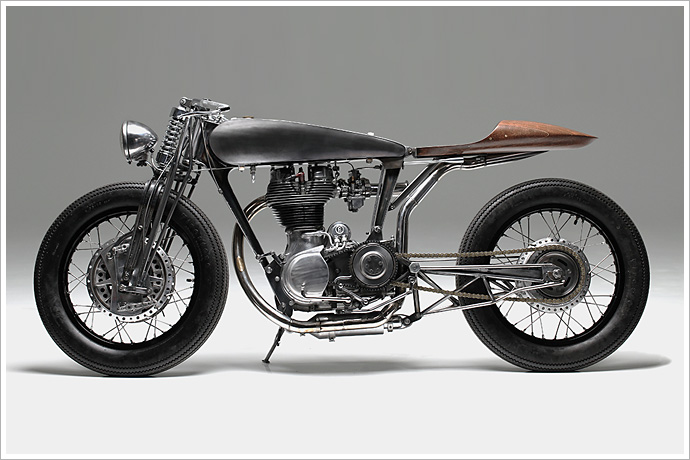 Craftsmanship is a word that gets thrown around a lot in relation to custom bikes. And fair enough, really. Unless you can create something purely by removing parts from a factory bike, you’ll probably get to the point where you have to fashion, fold, or file something sooner or later. But as any of us who have actually worked with metal in anger will know, there’s a world of difference between one man’s ‘that’ll do’ an another’s. Meet Max Hazan and the latest build out of his Hazan Motorworks shop in Brooklyn, New York. It’s pretty obvious to us that Max’s ‘that’ll do’ is, well… let’s just say that Max doesn’t do ‘that’ll do’. Not at all. Max started his bike building journey after an enforced 3 month motorcross accident sabbatical. Too many hours spent staring at a beach cruiser in his living room, led him to strap a motor to it to see what it could do. The answer was 90. Miles an hour, that is. Seeing that motorbikes were probably a logical, and less suicidal, conclusion to his cabin fever. A trip by his sister to India had left him with a niggling attraction to the Royal’s motor, and all that was needed then was a good dose of inspiration from Max’s past as a boat builder. ‘I guess that has something to do with the seat,’ he notes. Max’s approach to building is to try and never do the same thing twice. ‘I try to step out of my comfort zone with each build… it can be frustrating doing everything for the first time, every time.’ The bike spent about two months of hands-on time in the Hazan Motorworks shop for the build. And when Max says ‘build’ he really does mean it. ‘This was the first time that I built everything from scratch. Every lever, linkage, cable… each part was made to been seen.’ Just think about that next time you resort to a quick eBay purchase to tock something off your bike build’s to-do list. When asked about what skills he’d like to develop next, Max’s insightful response contains a valuable lesson for any young soul considering dirtying their hands on a custom bike project. ‘I find that I develop the skills as I need them for each project. I am lucky to have the skills that I do already, and to be a fast learner.  For me the ability to stay in the moment and be creative is the most valuable skill to making beautiful pieces. No amount of time on the English Wheel can create a good idea. The mind has to be right before the hands get moving.’ For more on Max and his shop, you may want to check out his website and Facebook page. And by the looks of them and some of the builds Hazan has coming up, New York’s set to finally make a splash on the East Coast bike scene. (Spotted on Moto-Mucci.com. Photography by David Hans Cooke and David Browning of E3MC.)