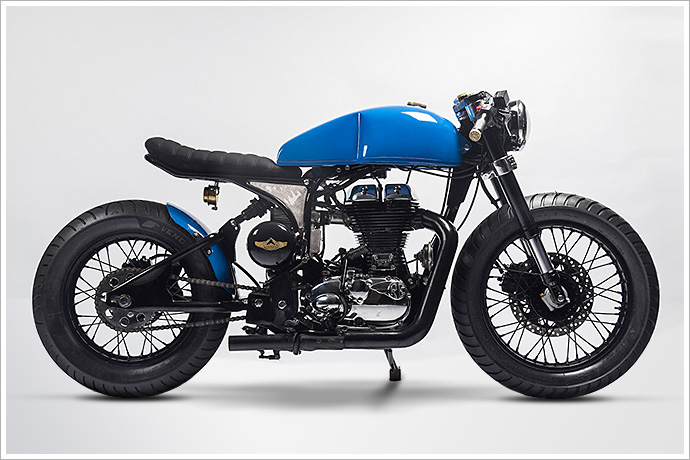 When Numero Uno Jeans were looking for the numero uno bike builder in India to build them a café racer, they were told to visit Rajputana Customs. Even though Rajputana hadn’t built a café racer before, they had the credentials and were keen to build something a little different from their past projects. Numero Uno were pretty loose with their brief. It had to be a café racer, it also had to use the Numero Uno colors and it had to have a few branding details – so people knew it was a Numero Uno bike. Vijay and the guys from Rajputana started with the classic Indian donor bike – the 500cc Royal Enfield. “This is our first full-blown café racer and we hope to build a few more of these in the years to come” says Vijay. The bike took them three months to build and all for the very palatable cost of 450,000 Rupee, which works out to be around $8000 – not bad for a fully customised, ground up build. When I asked Vijay where the stunning tank came from I quickly received the answer “we made it ourself… nothing is off the shelf”. That pretty much sums up Rajputana Customs. When they build a bike, they like to build everything they can on the bike. This time, like most of the time, they started with the a Royal Enfield and stripped it down to the frame. The swing arm was customised and then the stock Royal Enfield shocks were ditched for a mono shock set up, making for a much smoother and visually appealing ride. The front forks were replaced with KTM Front Forks. Also up front, the headlight was custom cast and the rear tail light was cast out of brass. At the rear of the bike, there’s been a jack shaft offset for the chain to accomodate a thicker rear tyre. The custom made seat has been covered in Número Uno black denim (just don’t wash it with your whites). The electrics have been hidden in a custom made Ellipsoid metal housing. To complete the classic café racer look, a set of clip-ons have replaced the stock bars. If you’re wondering what blue paint they used, then you will be left wondering, because it was custom made (of course) using a variety of blues, to get the perfect Numero Uno blue. This might be the first café racer Rajputana Customs have built, but we’re guessing it won’t be their last. As for Numero Uno, they are blown away by the finished motorcycle. So much so, they are now planning to take the bike on a world tour. Who knows, it might end up in a mall near you.