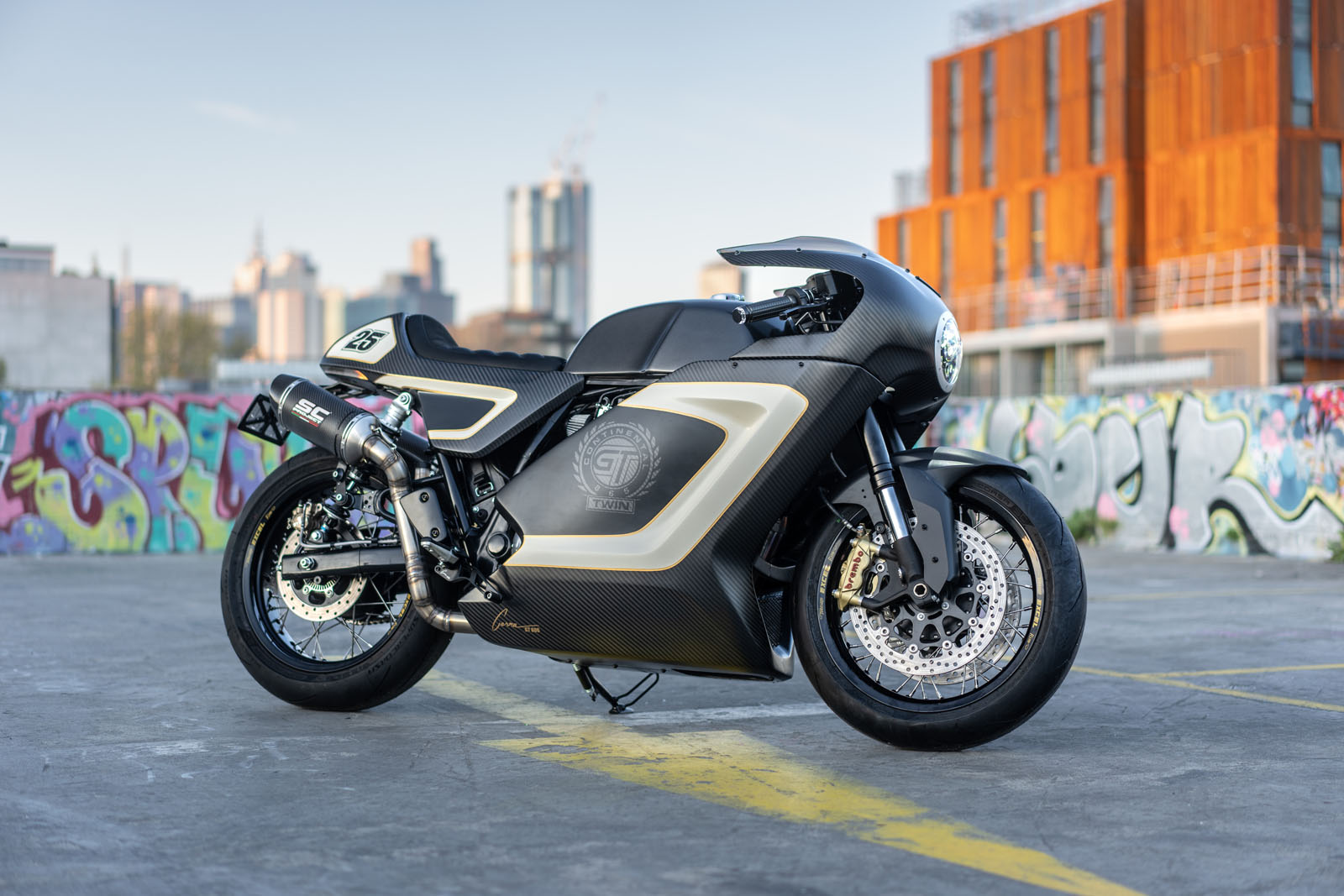 When you hear the names Bertone or Pininfarina, your mind is instantly transported to the automotive world’s most beautiful designs. Independent design studios, run by some of the most brilliant creative minds, have played a key role in helping major manufacturers to transform their already excellent products into works that tear at our every desire. Skunk Machine is an automotive design studio based in Melbourne, Australia, and is the atelier in which the artistry of Carl Cerra comes to life. Today he unveils ‘Cerra 865’, a Royal Enfield GT650 unlike anything you’ve seen before, and a collaboration between the master himself and some of the very best in the industry. This is a boutique custom creation that is production ready and simply a remarkable feat of design, craftsmanship and execution.

Having trained at RMIT in Industrial Design, Carl has spent decades working at home and abroad, where companies like BMW, General Motors, Audi and Ford to name but a few, have benefited from his incredible skill set. Having achieved so much in the automotive industry, the founding of Skunk Machine would allow Carl to branch out on his own and his talent with the art of clay modelling is simply a sight to behold. Knowing the team at Urban Moto (the local Royal Enfield importer), they approached Carl with the idea of building a custom GT650, with an open brief and a chance for his extraordinary creativity to run wild.

In the interview below – conducted by our own Mark Hawwa – Carl details his history, his design philosophies and the background to bringing Cerra 865 to life. But first, let’s take a look at some of the specifications of this remarkable machine. The powerplant is an 865cc big bore by Hallam Cycle Works, with SC project end cans and ultra-trick throttle bodies from the kings of Enfield power, Revelry Cycles. The chassis is supported by custom machined triple clamps, GSXR forks, Ohlins shock, Brembo brakes and Excel wheels. The electronics package is by Motogadget, there are endless custom parts and then there is that bodywork, carbon fibre with curves, lines and looks to die for!

Carl, tell us how you got into industrial design, and the sculpturing side of things?

I did Industrial design at RMIT, in Melbourne. Originally, I was interested in becoming a toy designer. Industrial design is a very flexible course. There are many options allowing you to enter into various design careers such as, product design, automotive design digital design etc. I found that I could develop my design concepts in 3d. Therefore, utilising clay was a great option for me. I had strengths in fabrication and make prototype models. I ended up in the car industry. Essentially making big boy’s toys.

When did you decide to make this your full time job?

I completed year 12 and only applied for Industrial as it was the only thing I wanted to do. The first year was a general introduction to design exposing us to many areas in the design world. Then you were able to specialise in your second and third year. You could do an internship or work experience in your fourth year.

About halfway through second year I started to focus on the automotive side of the course. Making scale models and working closer with clay.

When I graduated, I worked for a business in Campbellfield called, Bob McWilliam Plastics. We were Making body kits for the Ford HO / GT Falcons, the phase 6, 7 and 8. All sorts of body kits and then we worked on the Divi vans for the police. This is where I learnt about composites and gained more modelling experience.

From there I got a job at GMH. This was my first formal job in the car industry. I worked on the Holden Monaro project. That was around 1998 / 1989. As a fabricator working at Holden that was exciting, but I wanted to specialise in the clay. I applied at Audi as a trainee. I wanted to learn more and fortunately they accepted me. A few weeks later I was in Germany. Continuing to grow my knowledge of clay modelling. I also worked at BMW and a few other manufacturers while I lived overseas.

When I returned to Australia, I worked at Future Transport then returned to Audi for a short contract. Ford Australia for 1 year, then I started working at Toyota Australia as a lead clay modeller in 2004.

When did you start playing with motorcycles?

I always loved motorcycles but was never allowed to have one. My parents would have dis-owned me! BMX was as far as having two wheels. I was 35 when I finally got my motorcycle licence. Once having my licence, I became obsessed with motorcycle design. Customising redesigning and accessorising them. I started modifying bikes from then on.

I worked at Toyota for about 17 years after I left Ford. Learning more about the design processes, manufacturing, prototyping, composites and fabrication. I was lead clay modeler for the whole time I was there. But in my spare time I was always working on my own projects. I did leave Toyota for a few years and created a motorcycle workshop theme restaurant called Gasolina in South Wharf Melbourne. This was a very intense but exciting business. After 3 long hard years, we sold and moved on to new endeavours. That is when Skunk Machine was born. I worked back at Toyota part time for a few more years but it got to a stage where I felt like it was time to branch out and do my own thing again. It’s now or never.

Tell us more about Skunk Machine and how you use your clay skills in the business?

We are more of a design studio than a custom shop. That’s what I like to identify it as. For me, it’s all about the design process. There are custom shops that will work mainly with metal fabrication techniques. They create great work, and I have big respect for this trade and talent. I use an applied design process. Taking the learnings of my time in the car industry. Which typically means a series of concept sketches. Once a decision is made, I move into making a 3D concept model in clay.

The beauty of using clay, is that it doesn’t go hard. It is a polymer material, not a ceramic clay. This enables you to continually work the design continually until you are satisfied with the form. Clay is still to this day used in most car design studios. Many of them are transitioning to digital, but clay always exists as a reference model. You can walk around it, you can make changes on the spot, it truly is a beautiful medium. But mix this with technology such as scanning, CAD and virtual reality makes it an even more powerful design tool.

It works best for me because it enables me to really explore and create beautiful shapes which evolve into refined products. It is the best way for me to show a client what a design will look like before committing to final parts.

Where do our readers learn more about clay modelling?

Unfortunately, it’s slowly getting phased out of Australia. I was teaching clay modelling at Monash University for about five years in the industrial design transport course. But with all car manufacturers shrinking in Australia. There isn’t anywhere to learn these skills as easily anymore.

The industry is quite small here, so I guess that is the tertiary mindset. It is a shame because it is an international skill. You can work in just about any car company. If people are interested in clay modelling, it will be difficult to find any formal training in Australia. I plan to start a series of training courses that can be applied to the custom automotive and motorcycle industry. I’ve done some training for custom car builders, and they found value in being able to create and visualize shapes and surfaces before they get to the metal forming stage. It is a trade that has been kept behind closed design studio doors for decades. The application is huge.

Can you tell us more about the process of making these fantastic shapes and designs and turning them into a reality?

The process I used for this project (Cerra 865) was designing half the bike in clay, continually referring to my concept sketch. I scanned the clay after months of development and reviews. Processed the scan data into CAD. Cleaned up any deviations, split the model, and added shut lines, part lines and the flanges for the mould.

I take that data to a CNC shop, where they cut the master patterns. From this point, I make composite master moulds from tooling gelcoat and fiberglass. The fibreglass moulds are used to produce the final carbon fibre parts.

Let’s talk about the Cerra 865. How did that come about?

I’ve known Joe and the guys from Urban Moto (Royal Enfield Importer) here in Melbourne for many years. We have discussed and completed some creative projects over the years. Almost two years ago, I received a phone call from Joe, asking if I’d like to work on the GT650.

It was an of an open brief and they trusted me to use my skills to create the bike of my dreams. I didn’t want to go down the path of a cut and shut seat or make it a more stripped-down bike.

My goal was to create something unique, refined and production ready. I’ve always loved the 80’s style of race bikes. They are slightly awkward but kind of cool. I didn’t want to replicate the 80s either but create an 80s style with a modern twist. New and current with respect to the past, perhaps a throwback to the classic Isle of Man and GP racing theme.

Can I ask the question? How many man hours?

Well, this first prototype, I lost count. I stopped counting at about 2,000 hours. There were a lot of factors. We had two covid lockdowns, supply chain for materials and CNC machining shops were closed. It delayed the project close to 8 months.

But during that lock down time, I just took advantage of developing and kept designing. I didn’t want to rush it and it gave me the time to really refine the bike. It’s just one of those things, it becomes an addiction. You find yourself out in the workshop at midnight, you eventually kind of stop counting the hours.

It has been an awesome group effort though. Huge support from the guys at Kaber (CNC shop) and hours spent with Jarek at Horsch Carbon to the crew at Midlife cycles helping with the electrical and some mechanical work.

The engine was built by the gifted Charlie Hallam at Hallam Cycle Works, transforming the engine into an 865cc powerplant. Revelry Cycles generously gave me their performance throttle bodies to add to build. This project has had the support from some amazing, talented and passionate people, making this project possible.

We will have horsepower details shortly, but we are expecting close to double the standard figures.

There aren’t many untouched original parts left on the bike. It’s taken so much brain power to create something as special as this. So much time spent looking, studying and developing to create a product that is bespoke in design but looks factory produced.

Royal Enfield motorcycles are in my opinion one of the best packages for a custom design project.

With the amount of man hours involved in the Cerra 865, is this something that others may be able to purchase in the future?