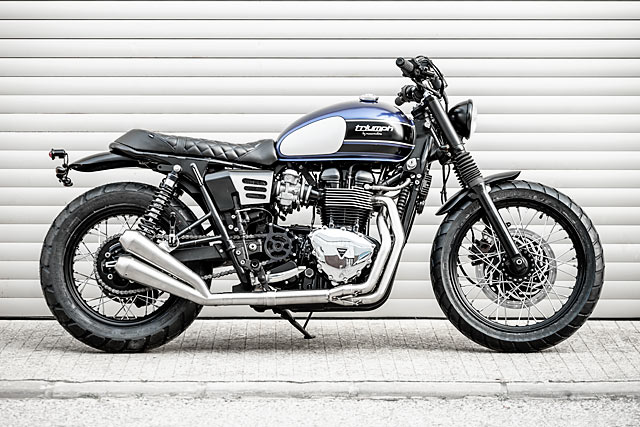 When does a custom bike shop become a fully fledged bike manufacturer? While some successful shops are happy with their two or three bikes a year, others like Spain’s Macco Motors take things a little more seriously. Eminently comfortable in their own stylistic skins, they’ve now developed quite the global business. With a waiting list as long as Stretch Armstrong’s arm and customers from as far a field as the UK and Miami, we’re beginning to wonder how long it’ll be before Hinckley starts to get worried. Here’s their latest build, a Triumph T100 they are calling ‘Seagull’. Macco Motors are Jose and Tito, and are based in Cádiz in Spain’s south. “We’ve been  friends for a long, long time,” says Jose. “We are just like brothers, and we have shared the same passion for two wheels since we met more than 20 years ago.”

Their love for motorcycles led them to start Macco Motors in late 2011. “It’s a place where we can realise our dreams, and hopefully those of others, too. It’s also the place from which we’re exporting custom bikes worldwide. From the UK and Germany to Italy and Miami; right now more than 90% of our work is done for customer’s outside of Spain.” Besides the competition of the industry, they have always been attracted to the aesthetics of classic bikes. The good taste and refinement of brands like Triumph, Ducati and BMW never failed to float their boats. “So take that and combine it with great performance, and a little something extra that adds exclusivity, and you have a Macco build,” says Jose.

“All we are really doing is paying attention to the details and looking for customising ideas that work with the spirit of the original bike. And we prefer working with new clients by starting with a previous Macco design and modifying it from there. It’s so both their needs and our own particular style are always considered first. In the end, we just really love what we do,” Jose says, smiling. The inspiration for this particular build came from the same process. A fan of Macco’s output so far, he had two specific requests that he needed fulfilling. “He had always wanted a Macco Triumph Bonneville. When we asked him how he saw this finished bike in his mind, he replied that he saw tracker in a particular shade of blue and with a special double exhaust system.” Alfredo, the bike’s soon-to-be owner, had been a Macco fan since day one. “This is one of those guys that has been a follower of ours forever, and has long dreamt of riding a Macco custom Triumph. After many years of talking and wishing, he finally got it.”

The process followed Macco’s usual steps. “First of all, we worked with him in Photoshop to get a general understanding of what he was after. Then, after discussing the final details, we started the disassembly process. First on the list was to send the wheels off to be painted.” They were chromed, and the boys wanted them black as night. At the same time, they worked on the tracker’s new subframe and seat base. Once they had polished that off, they attacked the bike’s front section by replacing pretty much everything bar the controls. “We’ve also relocated the ignition and rectifier, and new progressive springs have been added to the front forks.” Then there’s also the usual top shelf Macco fibreglass work: bespoke front and rear mudguards with the matching side panels.

But their masterstroke were the pipes. “To be honest, we had toyed with the idea before, but this was one of those moments in life where you’re forced to put your money where your idea is.” Starting with a set of Ducati Scrambler Spark exhausts, they took their trusty angle grinder and got to work. “There was a lot of extending, reducing and new brackets to be built, but once it was sorted we loved it. It’s probably our favourite part of the finished bike, actually.”