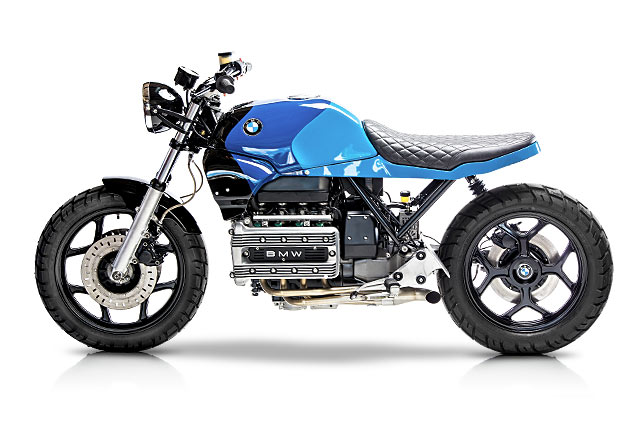 There must be something in the Virginia air. When you consider the state’s track record for creating great bike builders, their batting average ain’t half bad. With shops like Classified Moto, Cognito Moto and MotoHangar all hailing from the Lover’s state, there seems to be little doubt that they are head and shoulders above most Eastern states when it comes to custom bike coolness. And as if to rub your nose in it, here’s perennial favourites MotoRelic with another killer build. Fresh from their place in our most recent Bike of the Year Award, we’d like you to meet their scrambler take on the build platform du jour, the mighty (square) BMW K100. “About 5 months ago, a good customer of mine came to me interested in doing a K100 build,” says MotoRelic’s Sean Skinner. “At the time, there were only a select few floating around the interwebs. It seems the K100 has taken the top spot away from the Virago and Honda’s CX500 as far as popularity for custom builds go.” No prizes for guess that Sean is about to add the that tally – but not without first putting his own mark of proceedings.

Comically, this particular bike came to Sean dressed with pretty much every bit of plastic BMW could throw at it. After covering the shop floor with all of the un-necessaries, he got to work reshaping the back of the frame. “I shortened the rear up a bit, and added a hoop to tie it back together. I wanted to take a different route with the body work, so I got out my trusty painter’s tape and started laying out some possible body lines.” And since the K’s frame has an unusual downward slope to it, Sean decided to hide it behind an all-aluminum, handmade tail section. “I really wanted to tie the gas tank line into the tail section to form one contiguous visual line,” he notes. After getting the tail where it needed to be, the seat was next on the list. “I shaped the pan to match the body work, and then glued on the foam. Once the foam was sanded and shaped, it was sent out to Counter Balance Cycles for one of Wes’ beautiful stitch jobs.” After spending many hours staring and staring at the huge radiator and all of the empty space under the gas tank, he knew he would had to do something about it. “I cut out some cardboard templates and transferred that to pieces of 16 gauge aluminum sheet. I was in way over my head, but ignoring that I got to hammering and shaping some side covers.” After a few tiring rounds of hammer work on the stump and shot bag, Sean took out the planishing hammer for a final shaping. “I have two full days of work in those side covers, but I really couldn’t imagine the bike without them. Luckily they didn’t have to match each other, as the right side holds the intake duct.” Satisfied with the body, all the metalwork was taken to the local’s at Homeward Bound Motorcycles for yet another amazing paint job. “We talked for a while about colors and decided to lean towards BMW ‘M-like’ shades of blue with black. I wanted it to stand out, so big and bold was the theme. I know I’m biased, but I think we really knocked it out of the park.” And while the bodywork was off getting completed, Sean focused his attention on the rest of the bike. There were numerous leaks and parts that really needed to be replaced. “I resealed the engine, replaced the clutch and the water pump seals along with all of the rubber bits for the throttle bodies.” Then, after the engine, transmission and differential were sorted out, they too got a fresh coat of cast engine enamel. “The frame was then sent to the powder coater along with a few other things,” Sean recalls. “I upgraded the front fork springs to a stiffer set and lowered them by two inches. It made the stance nice and level.” Then Sean changed up the bars to add to the emerging ‘scrambler-meets-brat’ look. For the most part he maintained the stock controls, but added a set of Biltwell grips that matched the seat pattern perfectly. “You get all of your info from the nice KOSO gauge,” he says. “Though getting it to work correctly with the BMW sensors was quite a challenge. Luckily, the internet and a friend who is great with electronics made it all work perfectly.” The stock BMW K100 comes with a battery that is so big, it seems like it could be used in a car – which makes total sense once you figure out it WAS used in a car. “Anyway, that huge lump of lead had to go.” “I chose a high CCA AntiGravity battery and found that The Gasbox makes a perfect holder for it. I made a rubber-mounted bracket to hold the battery in the stock location, and then attached the Gasbox cradle to it. I also had a company cut me some stainless MotoRelic logos to use them on my custom exhausts and bikes, and I was pleasantly surprised to find they fit absolutely perfectly on that battery holder.” Clearly it was meant to be. Then the day came for Sean to install all of the freshly painted parts. Normally Sean would have already started the bike before this, just to work out any kinks, leaks or other issues. But this ol’ BMW requires the gas tank’s internal fuel pump to get started. “So you wanna talk stressful? This was stressful. Fresh gas in a freshly painted tank on a bike that was spread across my shop in a thousand pieces for a few months. What could go wrong?” Nothing, that’s what. Nothing went wrong. “The big ol’ girl fired right up and all of her fluids stayed inside. I said a quiet ‘thank you’ to the moto gods and gave it a rev.” “We lucked out with some nice February days here, and I was able to take the scrambler out on a few good road tests. The engine pulls really well, and you really only notice the hefty weight of the bike if you push it hard through a corner. The big wide seat lets you sit in comfort while the upgraded suspension soaks up the road. I enjoyed this build and would tackle another BMW anytime.” We’re ready when you are, Sean.