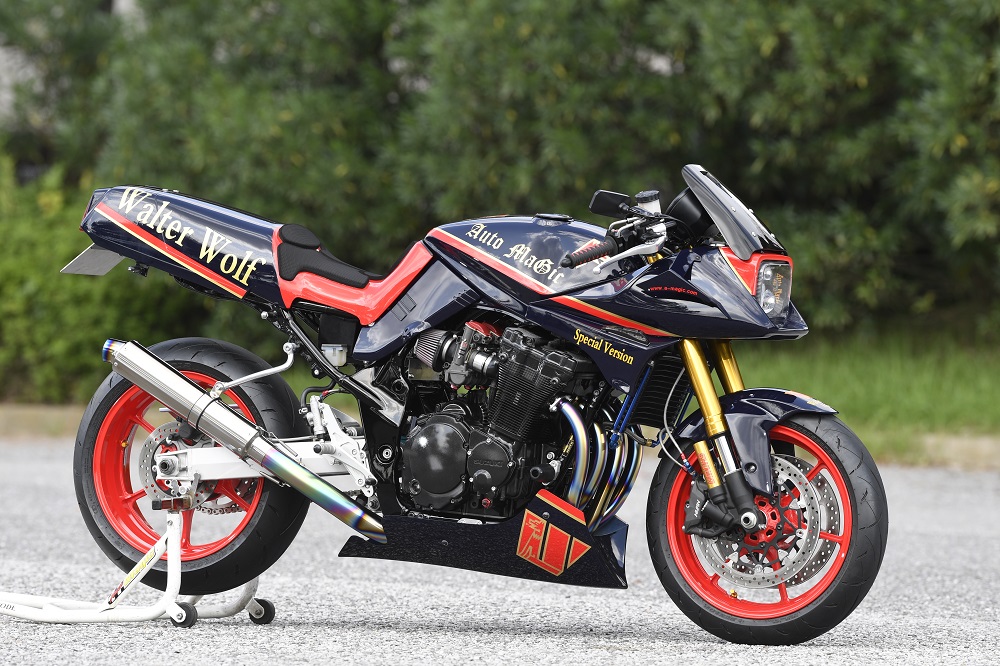 Anybody who has worked in sales will know about the customer who wants that rare item, that’s outrageously hard to find, highly desired, and yet at a bargain-basement price. It’s mission impossible and sadly you just have to send them on their way. But if you’re prepared to pay the right money, then Japan’s Auto Magic can make just about any motorcycle miracle come true. Since 1988, founder and lead engineer, Misao Araki has been turning average motorcycles into incredible custom creations, but as the supply of donor bikes dries up, he’s had to get creative. What you are looking at is a stunning race-inspired Suzuki Katana, but like all transformers, there is more than meets the eye.

There is no doubt that the original Katana shook up the motorcycle world like few bikes before it, and its incredible styling was a major departure for the otherwise conservative Japanese brands. But as amazing a machine as they are, they’re now over 40 years old and progress waits for no man. If you can find a good condition bike as a donor, it’s probably going to be too expensive and too nice to go cutting up. And a bike that makes for an affordable donor has probably seen better days. So rather than take the easy way out and buy the new ‘pretend’ Katana, Araki-San had an idea.

First, he sourced an original Katana frame that also came with plenty of bits and pieces that could be used in the build. Then the hunt was on for a mint condition 2000s Suzuki Bandit 1200S-2, that utilises the bored out and improved engine from the original slab side. What Araki-San had in mind, was to merge the two machines and make the most of the much newer bike’s improved engine, swingarm, chassis strength, and overall quality control; before then kitting it out with all the goodies. To start this merger of machines, both the Katana and Bandit frames were placed in the workshop’s laser-guided jig.

Both were then aligned to be mm perfect, the welds all checked, and improved bracing and gusseting added. Now came the tricky part, the two frames were cut in half and the top section of the Katana frame welded to the bottom section of the much newer Bandit. This meant that the Bandit section would hold the engine and swingarm, while the Katana top would now easily accept bodywork that was built to be bolted straight onto it. The final product had new lower subframe rails welded in and the neck, backbone, centre post supports, and rear section of the subframe all replaced with new steel.

It’s a hell of a lot of work and requires a level of skill that few can master, but it now meant the team had the perfect foundation with which to work. To bring the handling up to spec, the neck has been machined to accept new bearings and in slots the full front end from a K7 GSXR1000. This includes the exceptional BFF Showa forks, large drilled floating discs and a pair of Nissin radial-mounted calipers. At the rear end, the reworked Bandit swingarm is utilised and is controlled by a big dollar Nitron shock for control, while the wheels are lightweight K7 items.

Now the bodywork to bring the Katana lines to life could start to be prepared and this is where the owner/client comes into his own. He makes his own spoilers and fairings and working with the Auto Magic crew they designed a full new body that has all of those early ’80s aesthetics with a bunch of custom touches. Bringing them into 3D form, Auto Magic made the perfect front cowl, which also includes MotoGP inspired winglets and neat radiator covers. A stock fuel tank is retained before a complete fibreglass tail section was fabricated and a belly pan to complete.

With the glass work off the bike for the final panel and paintwork, the big oil/air-cooled 1200cc engine could be given a full rebuild. The internal specs are a tightly held secret, but a large new oiling system with speed fittings and an uprated hydraulic clutch hint at something special. To feed the fire a full bank of TMR carbs come straight from the racing section of the Yoshimura catalogue. There is an upgraded ignition and electronics package and to finish off this mean motor is of course one of Auto Magic’s famous full titanium exhaust packages.

The body goes back on with the deep navy blue and red colour scheme, offset by neat period race-style graphics in gold. The final fit-out on the bike is a mix of old and new, the original Katana instrument cluster gives a huge hit of nostalgia, while the custom rearsets and steering damper give the rider the ultimate in control. The headlight is a full LED unit that has been designed to slot into the square front opening and another original part, the ’80s taillight completes the set.

The build was an almost impossible dream of the owner that has taken four years to bring to life, but in working with Auto Magic he may just own the ultimate Suzuki Katana for slicing up the streets.