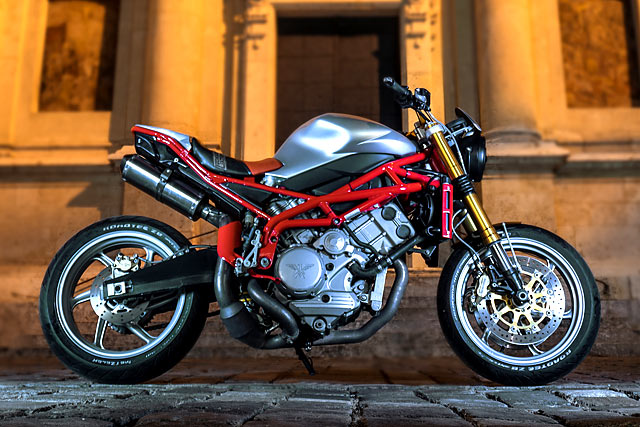 Despite the incredible motorcycles that have been coming out of Italy for more than a hundred years, even the biggest of manufacturers has gone through financial turmoil. Perhaps none more so than Moto Morini, who seem to have had more bankruptcies than Donald Trump. Things got so bad, the company nearly fell into the hands of Silvio Berlusconi’s Brother. But despite all of the financial woes, when the company has been on its feet it’s produced some incredible machines. Which is why fans of all things two wheels, Michael and Tom of Austria’s Titan Motorcycles had a desire to build a custom Morini to do the brand justice. Based on a 2007 Moto Morini Corsaro it’s a stripped down urban racer for the cafe set with a need for speed that earns it the name ‘Superleggera’, or ‘Superlight’. With development first beginning in 2004, the Corsaro model remains the key motorcycle in the Moto Morini line-up since its most recent reboot in 2012. It’s with good reason too, as the bike the company describes as a “Classic Model with Modern Technology” underwent an incredible amount of R&D that continues on with each update. The ’07 model that Michael and Tom picked up for the build was 100% stock, if you haven’t seen the real thing imagine a hand-built offspring of a Triumph Speed Triple and a Ducati Monster. But despite the incredible engine and terrific chassis the Morini had one big problem that always let it down. Dry it tips the scales at a massive 214 kg, an unacceptable number for a machine that is supposed to be an agile naked and thus the journey to Superleggera (Super Light) spec commenced. “We have stripped it down, removed all the plastics, the ugly headlamps etc, cleaned the frame and begun to work from there,” explains Michael as to how work commenced. One of the standout features of the factory bike was the big booty rear end with twin mufflers, but here Titan saw another opportunity for weight loss. With the stock plastics removed the standard frame is actually very narrow and a custom aluminium panel was designed and produced to provide just the barest covering. This gives the machine a visually shorter appearance and a switch to a solo seat would only accentuate the look. So the boys took a blade to the seat and narrowed it down and gave it newly contoured lines to match the overall theme. Then to give a hint of the racer feel they covered the seat with material from a set of ’70s race leathers. The colours not only match but it’s a throwback to the glory years of Moto Morini that Titan have sought to recreate. The first aluminium piece looked so good on the rear, the boys decided to make it a central theme, but that would mean exposing more of the factory frame. The ALS450 steel tubular trellis unit with varying diameter tube for flex and rigidity in the right places has been totally smoothed out and given a new lease on life in red. Before attention turned to the factory tank to give it the same brushed aluminium look as the rear. Having ditched the factory twin headlights a single LED unit gives a modern cafe touch. Before the final lightweight aluminium piece was crafted, the stunning yet simple front cowl. With the weight pouring off and the figure getting below 200kg, Titan wasn’t going to leave the engine totally stock despite how good it is from the factory. Designed by engineer Franco Lambertini who had worked at the company 30 years earlier it is not a Ducati twin as many assume. The 87° mono-casing configuration has enabled the design to be both self-supporting and compact while still punching out 140hp from its 1200cc. Not content with that figure Titan have redesigned the exhaust, with some of the biggest headers you’re likely to see flowing rearwards. The rest of the system tucks up under the seat and finishes with lightweight titanium Akrapovic can. First press reports of the bike on release warned riders about pinning the throttle in first gear and Michael confirms the sensation, “Full throttle feels like a hit from a Baseball bat at your neck!” Good times, but if things go wrong you want some stopping power and twin 320mm discs with Brembo calipers bring things to a halt nicely. The suspension is spot on too, with massive 50mm Marzocchi gold forks up front clamped by equally huge triple clamps. While out the back a linked Sachs shock allows the big Metzeler rubber to bite hard into the bitumen. Accessories have been kept to an absolute minimum with every last gram counting in the final equation. Brushed adjustable aluminium levers match the theme of the body work while Rizoma bar end turn signals keep things tidy. The foot controls have been colour coded with a mix of red and aluminium finish to match the body work. But this time powder coat replaces paint to ensure a hard-wearing finish and even the exhaust cover gets the treatment. Finally the factory front guard seemed too big and bulky so a blade style item was hand crafted and mounts to the factory struts. Last item on was a tiny LED tail light that is dwarfed by the Akrapovic muffler and provides a rear end view that shows a tiny waistline leading up to the busty tank. Titan Motorcycles have built without doubt the machine that Moto Morini should have to differentiate themselves from the other Italians. But perhaps it took two men from the medieval city of Graz to fashion a motorcycle more Italian than the Italians. So at night, amongst the old buildings and the quiet cobblestone lanes, the Superleggera leaves only a trail of flames to light up the perfect Austrian evening.