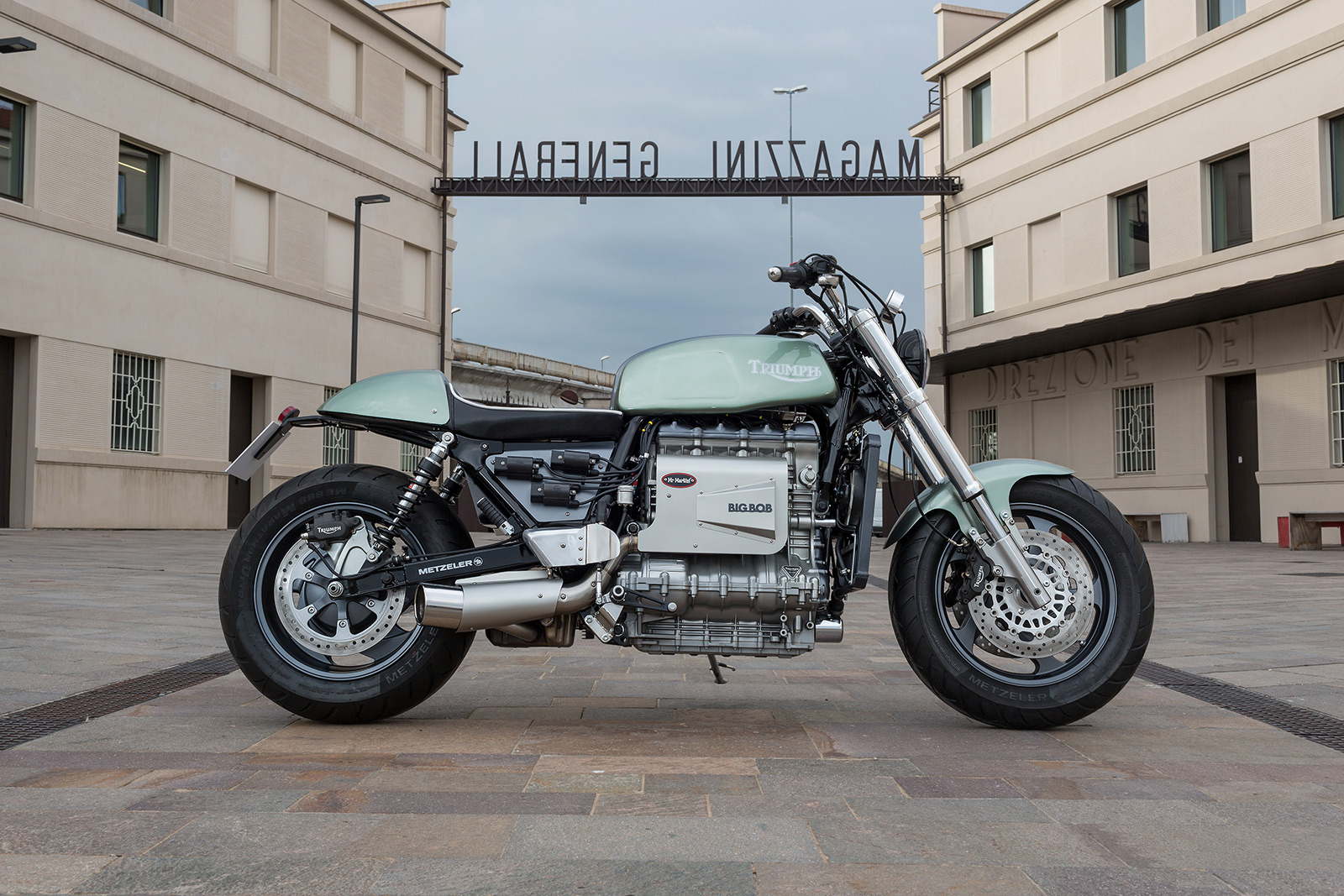 If ever there was a production bike that truly put the motor into motorcycle it was the original Triumph Rocket III. Rumours swirled during the development stage of the bike in the early noughties of a possible six-cylinder or maybe a big four. But the modern incarnation of Triumph had built their success on triples, so they turned one the long way round and gave it a whopping 2,294cc capacity, for the biggest engine ever fitted at the time to a genuine production motorcycle. So who better to take on a project involving the monster bike than the man with a huge personality and affinity for all things Triumph, Nicola of Italy’s Mr. Martini who presents ‘Big Bob’.

Nicola Martini has been in the custom bike game for more than a quarter of a century and building custom bikes is just part of his business. He’s also got a motorcycle-themed restaurant, a range of apparel and riding gear, and some very tasty parts. And having owned one of the first Triumph dealerships in Italy when the brand came back to life in a big way, he knows a thing or two about building one to its best.

A few years ago we featured his take on Triumph’s Legend TT known as ‘Bob’, so its fitting that this similarly themed bike wears the ‘Big Bob’ name, as there is simply no other way to describe a Rocket III. Starting with the original 2004 model meant that Nicola took on the Rocket in its most raw form, none of these rider aids and fancy gadgets that seek to tame down the latest evolution. But rather than try and hide that large lump, he embraced the monster motor and has let it take centre stage.

The first step in doing so was to strip away all of the chrome fittings and fixtures, the gaudy radiator cover and any other feeble attempt Triumph had made to disguise the three-cylinder brute. Nicola then removed the bulky factory fuel tank which allows the top of the engine to be exposed and you can take in its full glory. To make the most of the new space, the triple throttle bodies now pull air via a car like Ramair filter and cooling is improved too, with a thumping great big radiator that is assisted by a pair of thermo fans.

With the original fuel tank not going to be making a return, Mr Martini made an all-new item that sits neatly under the seat. Being an injected bike, the pump and its supporting components slot into the side of the tank, while refuelling is carried out via a Monza filler that sits recessed between the rider’s legs. On the other side of the bike an extra cover is added that plays host to the three coils that fire the twin spark engine. With the exhaust no longer a huge mess of pipes, but simply venting out the right side via a massive chrome tip.

To replace the massive gas tank, Nicola dove into his Triumph pile of pieces and came up with the much more slim lines of a tank originally intended for a Trident 750 from the ’70s. Modified to fit over the backbone, it also has a very neat cut out for the filter and once again lets the engine take centre stage. The wiring loom of the original Rocket was a hefty piece of kit, advanced for its time to deliver that 200nm of torque smoothly to the ground. But it’s all been given a tidy up and nicely hidden under the new metal.

The tail unit is hand made and the classic style is very much in keeping with the Mr Martini look, before it was off to Garage 66 to lay down the soft Green finish. The handmade leather seat with White piping provides plenty of room for the rider, who can then reach effortlessly up to the Bonneville bars for a comfortable riding position. Further improving the riders controls are the new pegs and linkages that position the feet directly below the pilot.

The woeful factory shocks have been replaced with much more befitting units from Bitubo, that do a much better job of handling the 700lbs of weight. Then it was on to the repainted rims and hubs that are wrapped up in Metzeler ME888 tyres that are designed for the cruiser market. An LED headlight and vintage taillight unit takes care of the lighting and some cool ‘Big Bob’ decals and graphics take pride of place on Mr Martini’s latest creation.

Improved in every single way, we can only imagine the looks on faces as Nicola straddles the engine with wheels, gives it a rev and reminds the scooter loving populace of Verona that the big boys are still in town