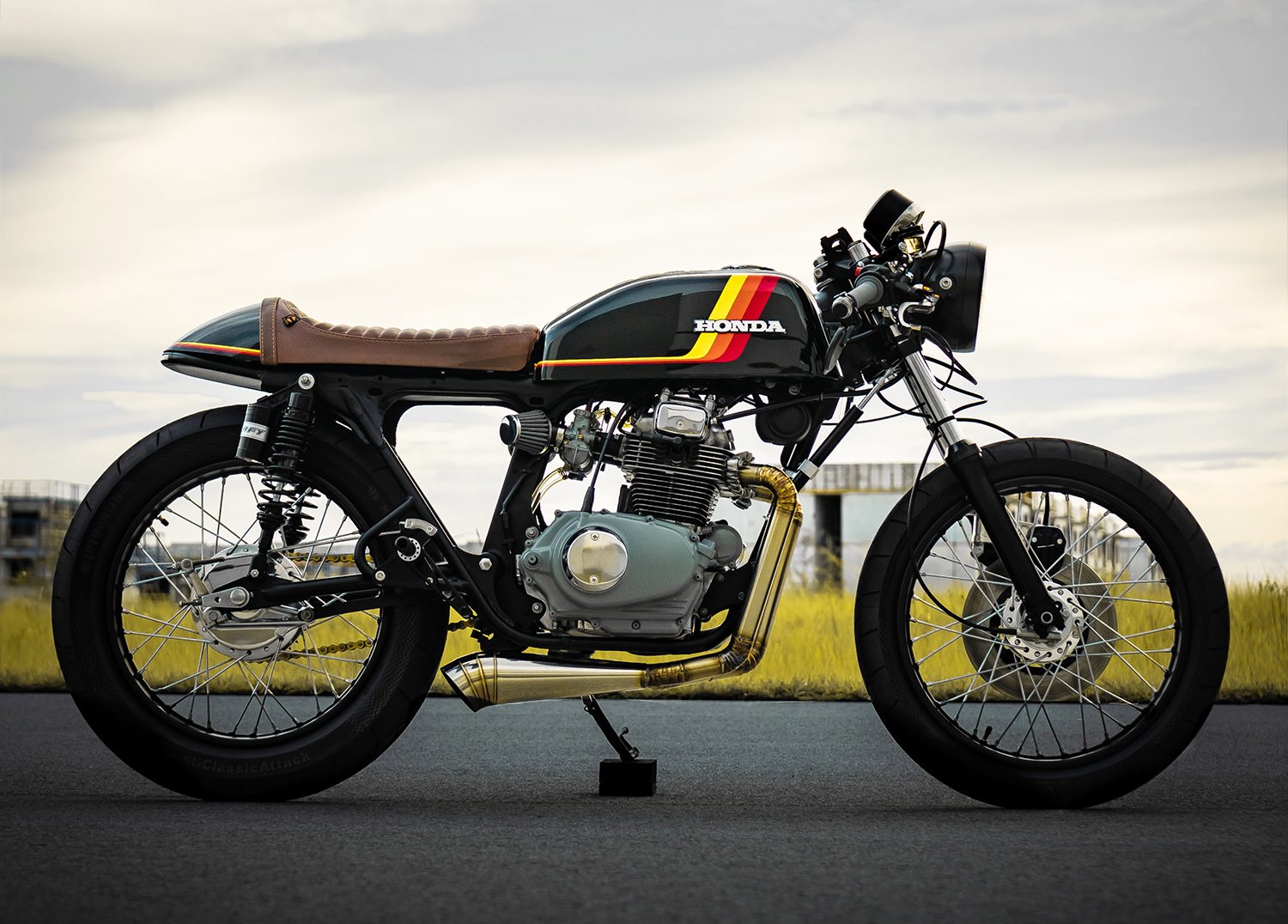 For more than six decades the Honda CB series has been doing it all, from small capacity commuter bikes to mid-sized tourers and badged with a RR, ripping up race tracks and taking home trophies. It’s hard to think of a more diverse range of bikes offered under the one badge, with models featuring single cylinders through to six. But while most of the earliest bikes were all about getting to and from work, when the CB200 arrived on the market it added some excitement to the small capacity offerings. So, not having seen many on the roads around him in Florida, William Tisnes picked up this 1974 example and has done an outstanding job, giving it the full cafe racer treatment.

Fresh off the factory floor the CB200 might have only spat out 17bhp, but weighing just 140kg ready to ride and revving higher than almost anything else on the road, they instantly became popular amongst club racers and those who like to keep the tacho needle in the red. The fact they could do all that on the smell of an oily rag and remain uber reliable was another huge advantage over many other offerings. But still being a cheap commuter bike and nearing 50 years old, few good examples remain.

Luckily for William, who is a keen car nut too, the particular CB200 he managed to track down was in excellent condition and would provide the perfect basis for his first custom build. Finished in the distinctive Muscat Green Metallic with rubber pad over the fuel tank, the 200 is one of the more unique looking CB’s, but William had a ’60s style cafe racer transformation in mind and quickly set to work. The first job was to make sure it would start and run, and with that box checked it was wheeled into his garage and pulled apart.

The simple layout of the CB makes it the perfect first project bike, and before too long the engine was out and the frame modifications underway. The clunky rear subframe was cut off, a new hoop welded in and a set of seat supports fabricated and they too were welded between the frame rails. The rearset brackets were mocked up and then it was out for a fresh lick of black powder coat on the frame. The stock suspension wasn’t going to be making an appearance, however, and with the frame out its replacements were prepared.

For the front end that meant slotting in a set of 1973 CB350 forks and modified triple trees to suit the CB200 frame. The lower legs and trees are painted black, the stanchions look to be in very good order and to keep it all pointing straight, William fit up a 330mm steering damper. The front disc brake and caliper have been overhauled and a stainless brake line fitted up to improve the feel. For the rear end, the stock shocks were ditched and a set of RFY units with progressive springs slotted into their place.

Despite it being his first bike build, William was determined to do as much as he could himself and set about rebuilding the wheels. The hubs are given a perfect polish, before a set of new blacked out rims and stainless hubs were laced up, trued, and then wrapped in grippy Continental Classic Attack tyres. The controls are clip-ons with foldable brake and clutch levers and Renthal grips. With the Speedo and Tach refurbished using stunning new white overlays and the custom brackets and rearsets from Dime City Cycles then fitted up.

When it came to the looks William knew exactly what he wanted, “My inspiration was going back to the ’60s to build a stripped bike with the paintwork inspired by a ’70s semi-truck.” That meant the tail unit is a classic cafe hump, while the factory tank remains and both of which are covered in a stunning House of Kolor paint scheme all laid down by the man himself. To match the look a call was made to Tuffside seats, who put together the perfect traditional leather piece with yellow stitching.

Having had the little twin-cylinder engine out of the frame for the build, it was given a refresh and a new coat of heat-proof paint. To give it some extra pep, Hutch’s Welding put together a sweet set of pie cut headers that merge into a single collector and vent out of a GP style muffler. Before the twin carbs were rebuilt and jetted to suit the extra flow, with a pair of pod filters on turned-out mounts to clear the centre post. The finished product is as clean as can be, with the CB once again proving the perfect candidate for a custom build and William now ready to cruise the fluorescent Florida streets.