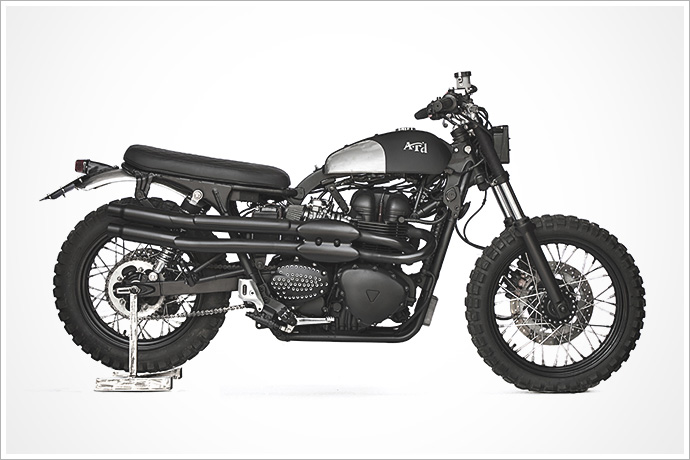 There’s nothing quite like a motorbike that has been painted matte black. Sure, these days you see the use of matte black on everything, hell, I’ve even seen a ‘murdered out’ Rolls Royce recently. But nothing beats a blacked out motorcycle, they just look tough. Add a good set of knobby tires and it instantly turns the look of the bike into something Steve McQueen would outrun Nazi’s on, or you’d find in a vintage motocross race. And that’s exactly the look these Italian brothers from Anvil Motociclette were going for. The latest bike to roll out of their Milan based shop is this rugged looking Triumph Scrambler, and they’ve done more than just add some knobby tires. Let’s start with the basics, the donor bike is a 2006 Triumph Scrambler and in true Anvil fashion nearly everything has been painted matte black. The large stock Triumph tank has been swapped for a smaller vintage tank which is 60 years old and they found in the markets, which has been restored and painted black with silver – one of the only parts on the bike that received a different colour. The square black headlight is off a tractor and adds to the brawny look from the front. The bikes name, ‘A.R.D’, is an abbreviation of the word Ardito, which means bold and daring. “To design the ‘A.R.D’ we took inspiration from regular bikes British, we have tried to simplify as much as possible the line of the bike” says Marco from Anvil. “We attempted to make a Triumph in a modern bike with the same charm of the past. All changes were made to make it look like a motorcycle out of an old motocross race.” The stock Scrambler seat has been ditched for a hand made leather one – Italian leather, of course. Customised mufflers, the engine, and motocross handlebars have all been given the Anvil matte black treatment. While the handmade aluminium rear fender gives the bike another touch of silver. The tires are Continental TKC 80’s – they love the road almost as much as they love getting dirty. To make the bike more agile, they have lowered the centre of gravity of the bike to give it a motorcross feel by replacing and lowering the rear shock absorbers and the front forks.

Before handing the bike over to the eager customer, the guys had to take it for a test ride around the roads and fields behind their workshop and straight away they knew they were successful in what they set out to achieve, creating a timeless scrambler that looks like one, but more importantly rides like one.