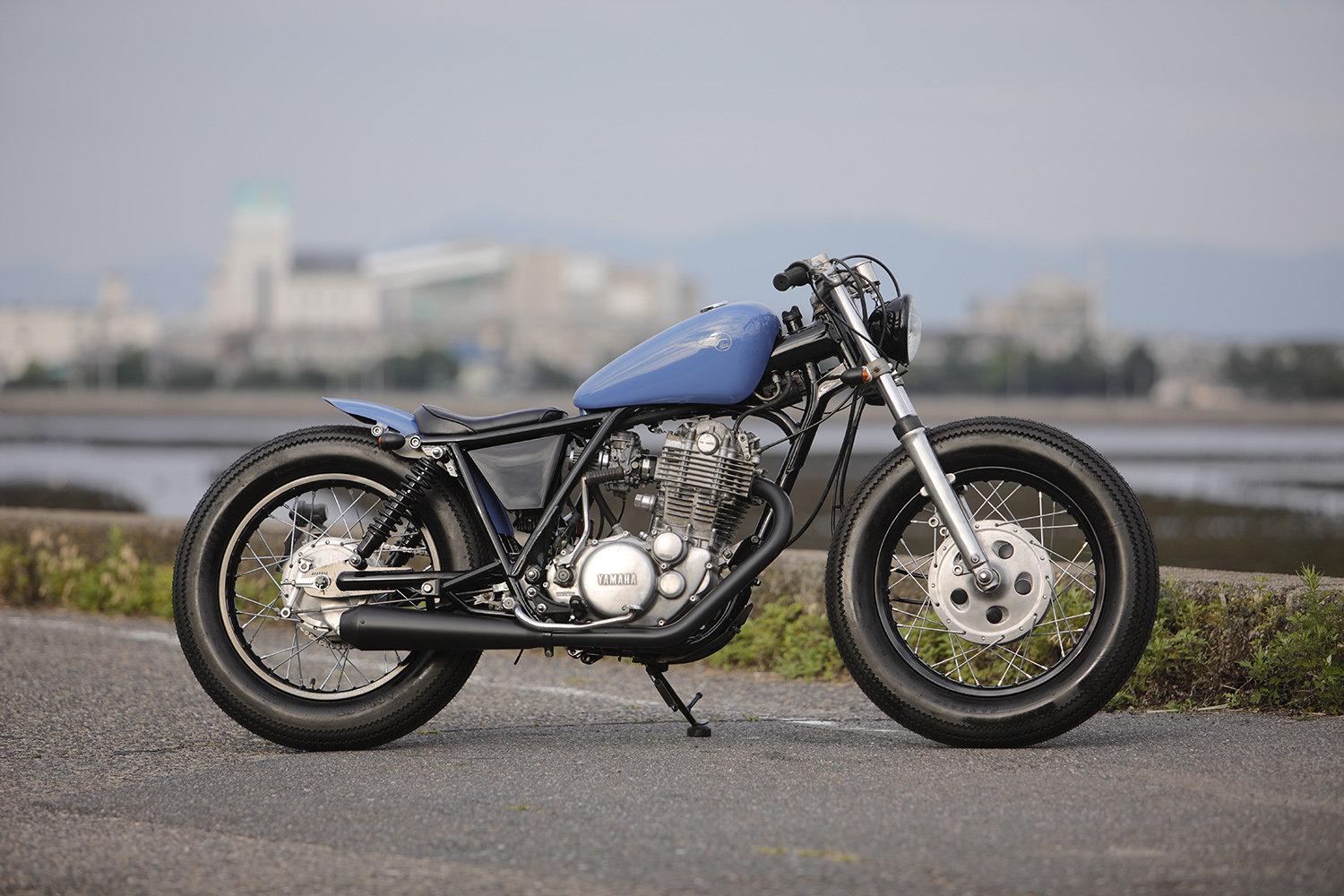 In my hopeless search to discover just which hand-built bike may have started the cafe racer revival, I’ve been spending a lot of time on the Wayback Machine website. The transition from ugly themed choppers to this period of custom cool we’ve been enjoying for over a decade wasn’t of course forged in the fire of any one particular date. But what stands out time and time again in the early days, is the appearance of Yamaha’s humble SR400 and the incredible craftsmanship of Japan’s elite builders. Leading the pack are Heiwa Motorcycles and as perfect as ever is their latest creation, Yamaha SR400 build No. 21.

It was 2005 and on TV screens the world over, Paul Snr, Jnr, and the crew at OCC were throwing off the covers of their latest “motorcycle”, another corporate cringe machine, for the Gillette razor company. With all the subtly of a sledgehammer and the cornering ability of a semi-trailer, millions praised them as the best bike builders in the world. But across the sea in the port area of the city of Hiroshima, a young man named Kengo Kimura was setting up shop. Here, like with the Japanese masters of old, he’s worked without fuss or fancy and become one of the true masters of the modern motorcycle age.

From new retro machines from Kawasaki, to old school Triumph’s and everything in between, the man from Heiwa Motorcycles has been turning out one show-winning bike after another. But with Yamaha keeping the production going of the SR400 for the last 40 years, he’s had a constant supply and build No. 21 of the famed single-cylinder fun machine starts like any other. With the Yammie stripped down to its bare frame and ready for surgery.

The frame is carefully modified with Kimura-san removing the rear section of the subframe and shock mounts. Before adding his own neat additions for an ultra-clean look, with the end of the frame forming a strut for the work to follow. With the chassis prepared it’s then repainted in a hard-wearing black finish. In the space under the seat where other bikes might have an oil tank, the Yamaha does away with this need with the oil in frame design. So dressed up as a lube tube is a neat battery box and home to most of the bike’s electrics.

Then work can commence on the tins and all the metal is handmade, with each part lovingly crafted. That rear strut on the end of the frame holds one of Kimura-san’s own custom fender mounts, with that rolled and ribbed fender then attached and floating beautifully over the rear rubber. It’s all a masterclass in minimalism and his signature handmade fuel tank, with its rounded flowing lines, ensures a timeless look on an already ageless motorcycle.

Handling the paintwork is, as always on a Heiwa build, the guys at N2AUTO and once again they’ve mixed up a custom colour. The soft tones of the blue with a simple company logo further enhance just how flawless the metalwork is and the build is starting to take shape. The handcrafted leather seat is of no particular style, the classic black with longitudinal stitching, however, is instantly recognisable as the work of Kimura-san and provides the perfect union between the front and rear of the motorcycle.

To get the look he was after he pulled apart the front suspension and lowered the forks by 50mm. While at the rear, a custom set of shocks that are designed for the application drop the back end an equal amount. The stock hubs, with stunning front drum brake, have then been laced up to new 18in rims front and rear. Before they’re wrapped in Adlert’s Classic tyre with a vintage tread pattern. The engine remains relatively stock, with just a new blacked out header and Heiwa series muffler for some extra sound.

Keeping things legal is the rear, strut style, rear plate holder with a signature tail lamp that is one of Kimura-san’s most popular parts. A new mini speedo sits in front of the turned down bars with classic grips, a set of indicators, and a Bates front headlight completing the less is more build. In the flashing lights of a TV Biker Build Off, the general public would no doubt have voted for the OCC bike. But here’s the truth, they’re long since bankrupt and those big dollar builds are rusting away, most having failed to ever travel more than a few hundred miles. At Heiwa Motorcycles, however, incredible builds are just part of the every day, and SR400 No. 21 will still be an incredible and rideable custom creation when most of us have long since kicked the bucket.