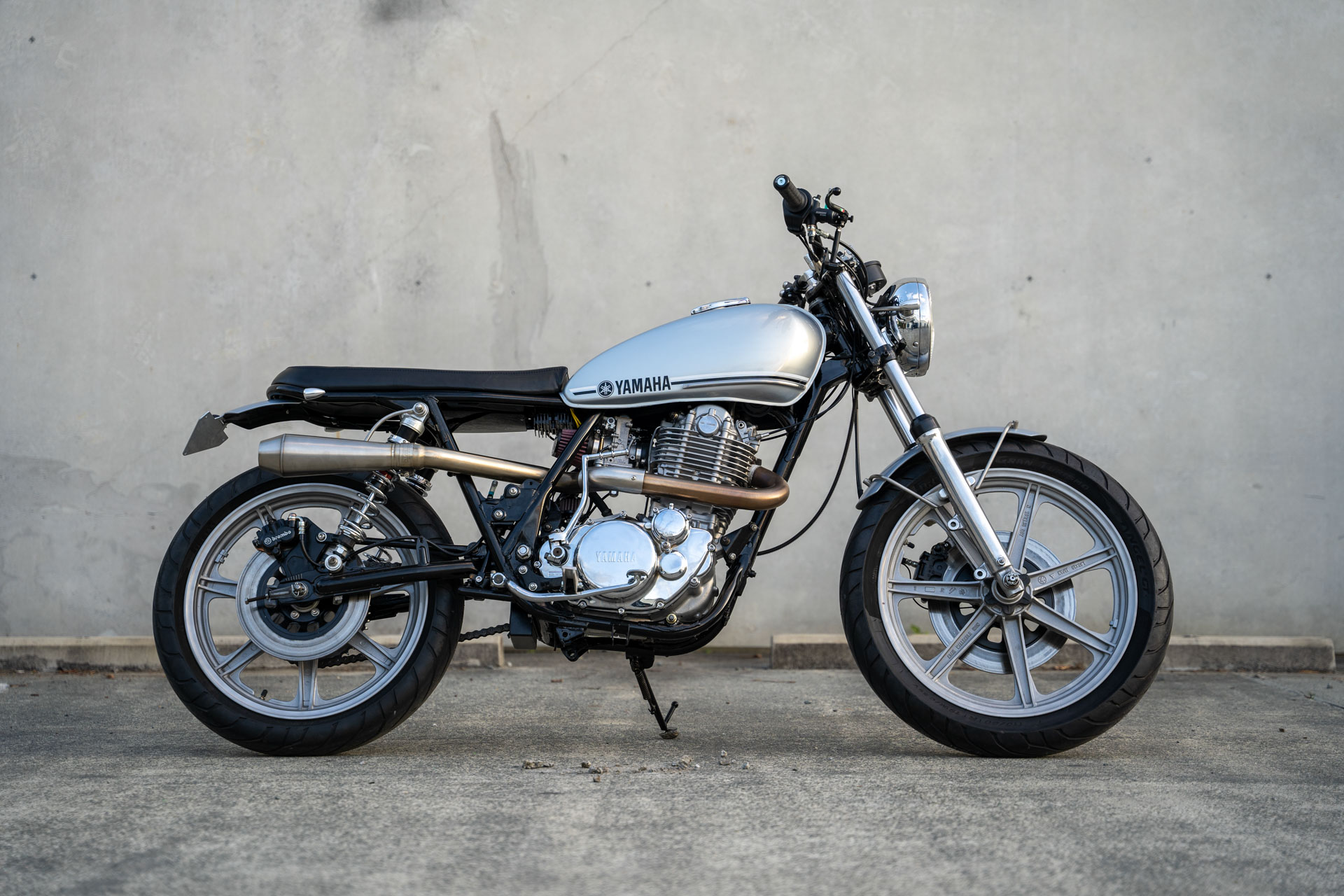 There are plenty of outsiders that look at this custom motorcycle scene and ask the question, why do you use old busted bikes when you can go and buy something brand new with all of the latest tech? The answers will vary for many, but the fundamentals often boil down to simplicity, character, and nostalgia. So, a motorcycle that’s been in the family since 1983 definitely ticks one of those boxes, and when that particular bike is the iconic Yamaha SR500, then the rest of the reasons simply take care of themselves. But old bikes break down and a rebuild is the perfect time to keep a machine’s general essence while improving it in every single way. This is exactly what has been done to this 1978 SR Street Scrambler by the uber-talented team at Queensland’s Purpose Built Moto.

Head Honcho at PBM, Tom Gilroy, tells us how the SR story began, “This bike had been discussed for a few months between myself and the owner’s Mark and Jon (father and son) during a period where we were booked solid and couldn’t take any more builds on. Once we had time to meet in person and get started the guys let me know a bit about the bike.” Having been in the family for 40 years, the SR had been passed down to each new generation, had racked up 80,000km, and earned itself plenty of battle scars before one day she simply stopped! So, the bike was to be rebuilt and Tom sums up the ethos; Simple, Pure, Elegant!

“PBM has recently expanded into building our own motors in-house, so we pulled the motor for some testing to see what we were looking at. To our surprise for the amount of KMs on the engine it looked great inside.” But old bearings eventually fail, so the single cylinder engine was given a thorough rebuild inside and out. To give the engine a whole lot more get up and go, a high compression piston was slotted in, performance valve springs fitted into the ported head, and a new clutch for good measure. A Mikuni flatslide carb handles the extra fuelling and improves the throttle response and an upgraded coil brings the ignition into the 21st century.

With in-house mechanic Jesse having worked his magic, the wheels were stripped and then hydroblasted, with the lips sanded to a fine finish. A coat of clear ensures that there will be no oxidising in the salty air of the Gold Coast and then they’re wrapped up in Pirelli Angel GT tyres.

The suspension was next on the list and while ok from the factory, it definitely needs an improvement to meet 2022 standards. The front forks have been rebuilt and slightly stiffened up, still plush but without that doughy feeling. While at the rear end, things get a lift with slightly longer shocks from the team at YSS.

Time for some fabrication work, and it’s another area where PBM excels. “Dylan got busy in the fab lab cleaning the frame down and hooping the tail to allow for our new brat style seat to be built. Hiding the battery under the swing arm, and the black box module under the seat allowed a lot of room where the old side covers were removed.

Giving the bike a much lighter look through the middle. The tail has been kitted out with our aluminium rear fender kit, tail tidy, and had the tail lights frenched into the frame for that ultra-crispy finish.” It still all looks utterly SR500 in nature, simply improved in every single way.

With the engine back in the frame, it was time to create a custom exhaust and Tom has strong feelings about not only what looks right on an SR, but how to extract the best sound from a single. “From experience, putting a short header on these bikes with a performance muffler that finishes under the engine cradle sounds horrible.”

Having opened up the frame, the high-rise style pipe is able to snake through the metal work, ensuring greater overall length and also keeping the heat as far from the rider as possible with such a design. With an extra heat shield added for good measure and that gorgeous reverse cone muffler, the system is the perfect match for the single cylinder lump.

“We’ve retained the standard headlight and replaced the internal glass as well as having to hand beat and repair some damage to the bezel and headlight bucket. This and a few other select parts were sent out for chrome before we got busy wiring the bike up and heading for a few test rides.” Tom has been showing Dylan the ropes when it comes to wiring, made much easier by the PBM black box, that works with the mini switches on the Biltwell bars. These feature an XM2 throttle, Accosato levers, and a neat Daytona Velona-W multi-instrument gauge.

To finish off the build, Tom had an idea for a custom touch that would give the classic style of the fuel tank a little extra something. “A simple round bar detail has been added to the tank, some 12mm stainless rod shaped and welded in place adding some much needed depth to the otherwise simple design.”

Then it was over to Justin at Popbang Classics to lay down the paint in absolutely flawless style. Wherever you look there are stunning touches, the mounts for the front fender, the custom sprocket cover, and many more items to find and fawn over.

But the end result is one simple and elegant SR, that will no doubt stay in the Mitchell family for decades more and prove to be a blast whenever it gets taken out for a ride.