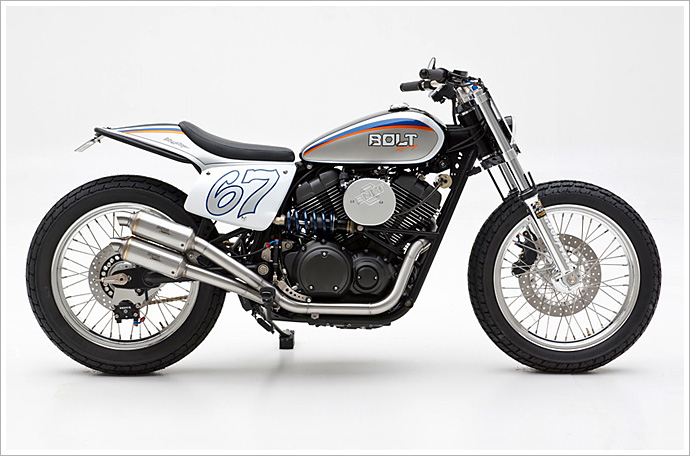 A little while back Yamaha gave one of their fresh off the factory floor Star Bolt’s to 10 custom bike builders. The brief was pretty simple, do whatever you want with it. Jeff Palhegyi from JPD Customs was one of the chosen builders. Over the years Jeff has created more than 60 individual custom Stars for Yamaha, but this was his first Star Bolt. After throwing around a few concepts, Jeff decided to turn the Bolt into a retro styled dirt tracker. “I have always been a fan of Dirt Track Racing and the Star Bolt ‘Dirt Track Concept’ was a natural fit” he says. The bike may not have won the Bolt Build Off – that was awarded to Doc’s Chops – but it did receive a lot of attention and is still one of our favourite Bolt builds. Initially, Jeff and his team were just going to add dirt track wheels and bodywork to build this street tracker, after purchasing these items they figured out that the steering head was too high and the swing arm too long. Placing the chassis in the fixture they cut the top tube away from the chassis, along with that went the steering head down tubes and eventually the whole bottom of the chassis. After reworking the chassis, they realized that modifying the stock tank was going to work nicely. The stock tank was chopped down 2 inches. They also shortened the swing arm almost 3 inches and put everything together only to see that the shocks stuck out in the wind with the dirt track tail section. “Back out came the sawzall and the rear of the chassis was cut away, Geeze there was nothing left!” says Jeff.”I got on the phone with Penske and a custom dirt track monoshock was on the way.With all that done the tail was still not right, I sectioned it and added 2 inches, fabbed up a subframe, hand-made aluminium side covers and number plates.” With the build deadline looming, Jeff still didn’t like the way the stock headlight looked and he also needed an exhaust. “Burns stainless provided the cool ultra lite mufflers and a bunch of u-bends to build the exhaust. I went online and found the perfect size lights from KC and fabbed up the new aluminium front number plate. Yamaha R6 forks were used and we machined the retro TZ look carrier and front rotor, wheels are from Dave at Jupiter wheel, tires are Goodyear Dirt Track, seat was made by Howard McKee and the paint was laid on by our regular Benny Flores. When we were done, there was almost a complete Yamaha Bolt on the floor of the workshop, less the engine and electrical.” The Bolt’s simplicity really helped Jeff and his team achieve this stripped down retro dirt tracker. “I’ll be the first to admit we got a little carried away with the fabrication work” he says. “It was great fun and that’s what a bike build is all about.”