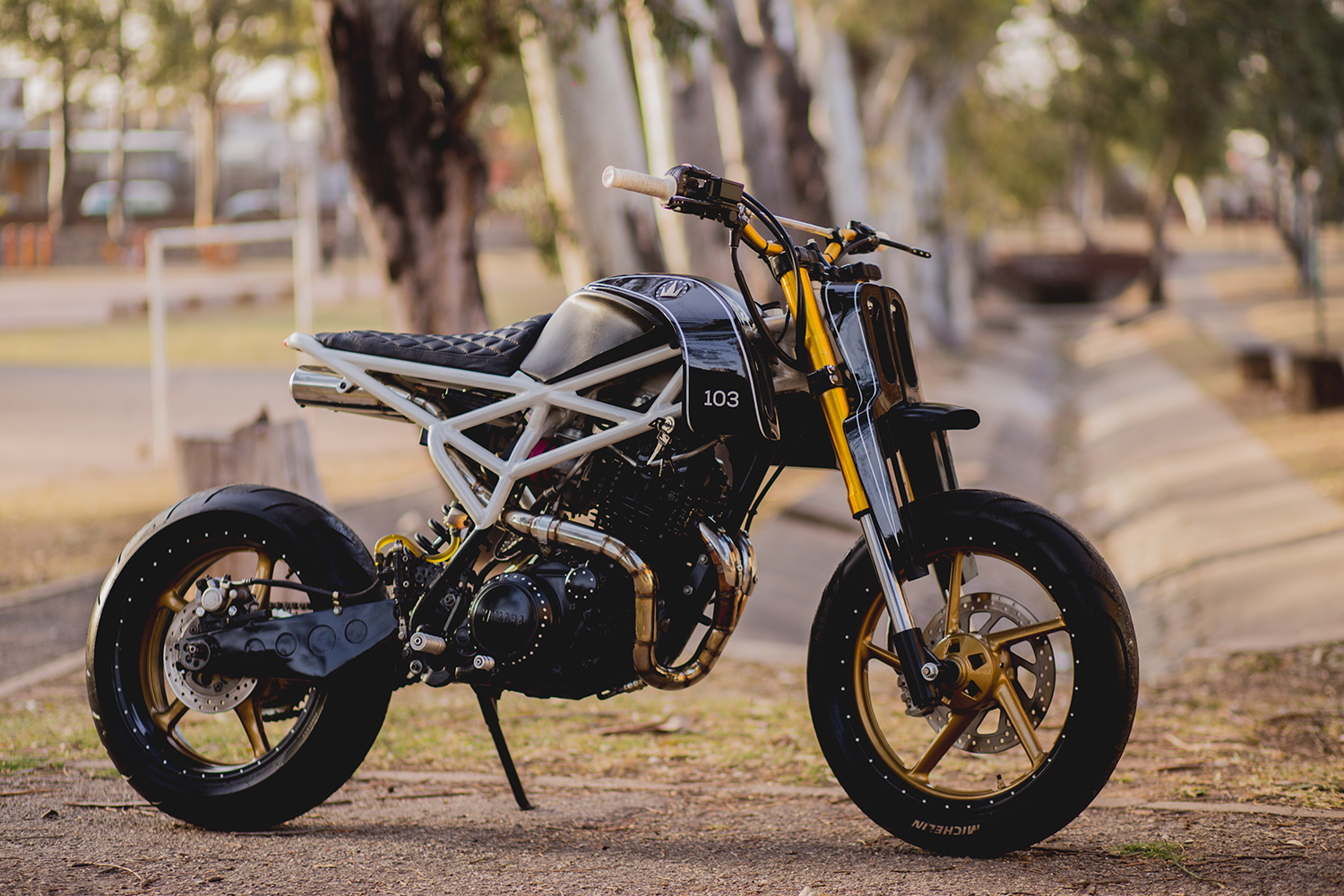 Brilliant on their steed, incredibly brave but known to be unruly, the Gaucho of South America’s old frontier might be best exemplified in the modern day by the custom biker who lives the lifestyle to the extreme. So, if you want to live your life as an Urban Cowboy, then there really is only one bike that will let you tame the city streets and escape in rapid fashion when your rowdy behaviour gets the attention of the fuzz – a Super Motard! When a man from Buenos Aires decided he needed such a ride, he turned to Argentina’s pre-eminent bike builders, Lucky Custom and had Lucas and the crew turn a Yamaha XT600 into a mad Motard known as Malambo, the famous dance of the solo Gaucho.

Since 2006 Lucas Layum and his team have been knocking out incredible customs at their workshop in Cordoba, and this is full build number 103 for the outfit. They’ve also amassed a large global following and despite crafting everything from small scramblers to full show bike choppers, they have a distinct style that is impossible to miss. So, with a client from the capital city after his own Lucky machine, Lucas was looking for a bike that could be turned into a Super Motard. Manufacturers have only ever sold a handful, most notably products from KTM and Ducati, but lightweight single-cylinder enduro bikes make for excellent donor options.

That’s when the guys found a 1993 Yamaha XT600, the big torquey single-cylinder engine would take care of the power plant and basically everything else they’d make from scratch. Even the Yamaha frame didn’t make the cut, as the crew went through the entire bike and picked out the pieces they’d keep and those they’d get rid of. Soon the pile of parts to keep was done, with just the engine and rear shock remaining plus a few extra nuts and bolts. That meant the first job that would need to be completed was to build a custom frame for their 103rd custom creation.

Taking inspiration from the chassis of the Ducati Hypermotard and adding a little more Italian flare from some Benelli designs, a tube trellis-style frame was being pieced together. The key to the whole production was to craft rock solid swingarm and headstock points while keeping the weight low. To allow the whole thing to properly cradle the engine, the stock Yamaha downtube got a reprieve and was cut out and used to tie together the new metalwork. Now finished in white, every last weld of the new chassis has been ground smooth and it really is a work of art and provides maximum structural rigidity, for excellent feedback to the rider.

That trait was something the stock XT never did well. Throw it at a loose bit of dirt and the bike excelled, find a sharp switch back on a grippy sealed surface and it was like riding a pogo stick and praying you’d survive. To fix the problem, the long and sloppy front forks have been swapped out for a set of rebuilt USD items with the triple trees using a new stem to match the headstock. The rear end relies on a custom-built swingarm, made from aluminium and using the axle blocks from the XT. This allows for the rear shock geometry to be adjusted and a rebuilt XT shock finds a new home in a custom upper mount.

Time to make it look brilliant even standing still, “the protagonist of the bike is the front and the tank, it is 100% handmade exclusively for this bike. What looks like a tank is a cover, the real tank is underneath,” Lucas smiles. Part of that tank, with the handcrafted Lucky Custom badges, is the huge side pods that serve as ducts to funnel as much fresh air as possible to the engine and give a menacing look. Their imposing nature is only further enhanced by the new front end, which is an all-in-one piece that integrates the light surrounds, front fender, cowl and fork covers. A two-piece leather seat finishes out much of the look, with the diamond stitching ready to complement the next stage of the build.

That is, of course, the wheel selection, which like all Lucky Custom bikes features their distinctive “diamond drilled speed holes”, that also dot the rest of the bike. The wheels themselves are taken from a 2010 Yamaha R6, and not only do they allow for a much greater selection of rubber, being 17″ in size, Lucas took full advantage at the rear to fit a big 180 section for extra width. Drilled discs and rebuilt calipers are used at both ends for braking, and given the lightweight and need for fast steering, the decision was made to only use a single disc on the front end.

The power plant couldn’t be forgotten and the 595cc 4-valve single has been rebuilt, resprayed black and decorated in more of those signature speed holes. A pod filter supplies the rebuilt carb and “the exhaust is built by hand in custom stainless steel, two by one backwards, with two stainless steel silencers, which are part of the rear aesthetics of the motorcycle.”

The final touches in the looks department fall on the array of LED lights, the twin vertical 4×4 units at the front end shining a bright path. To complete, a set of new risers mount MX bars and the gas-guzzling Gaucho gets custom rearsets for stirrups.

It might be just another day at the busy Lucky Custom workshop, but for the new owner, it fulfils his dream of dominating his home streets on his own slick steed!