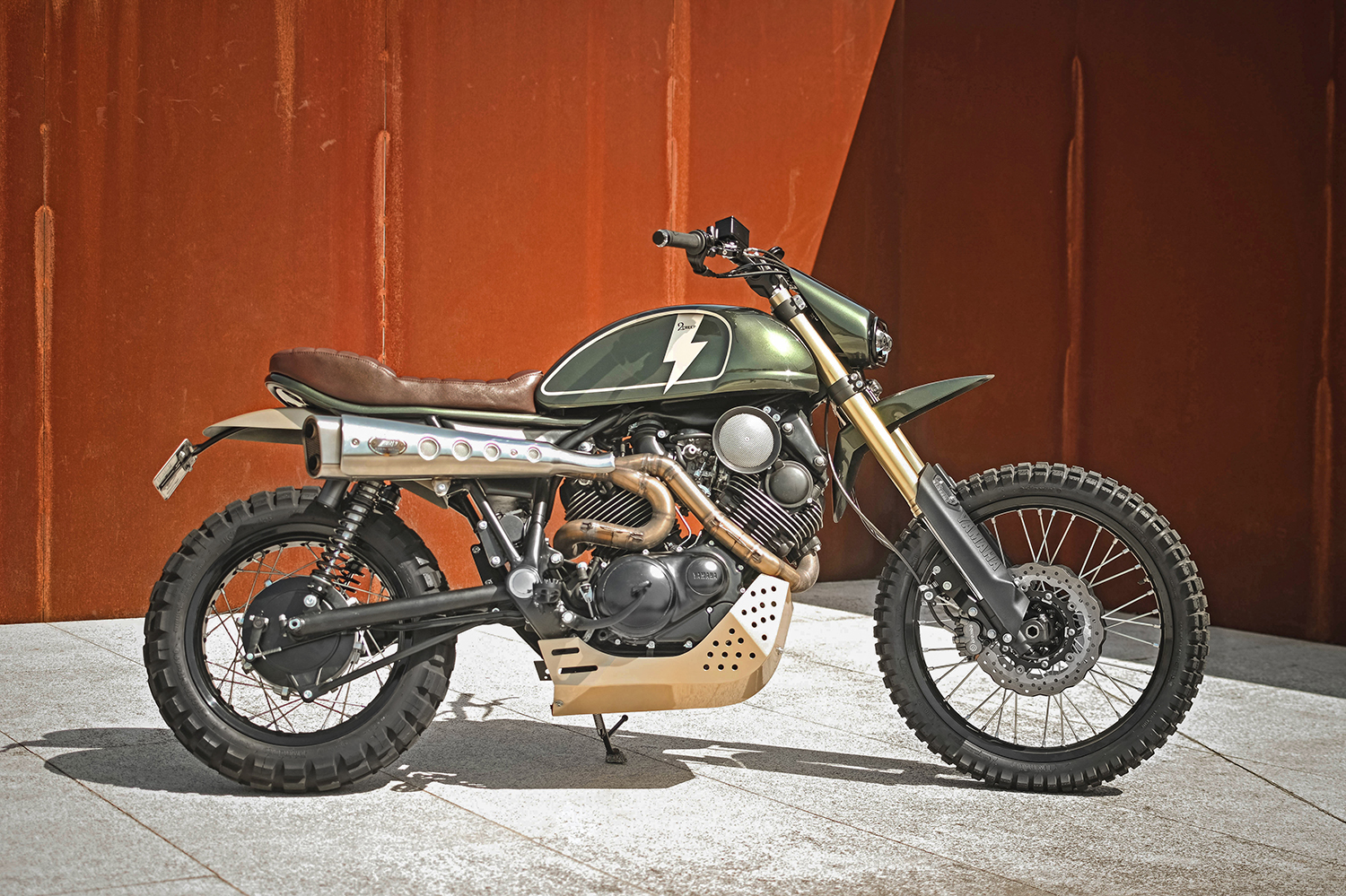 The Dakar Rally is one of the toughest tests of man and machine on the planet, but sadly like so many major motorsport events, it’s become corrupted by the big dollars of government, sponsors and manufacturers. So, to get back to the grassroots of tackling the sweeping sands of the Sahara, you need look no further than Scram Africa. The 2022 event kicks off this weekend under the banner ‘The Desert Rats Edition’ and competitors are making the last tweaks to man and machine in anticipation. On the start line will sit this incredible Yamaha XV1100 from the Portuguese trio of IRB, bucking the trend of picking factory scrambler machines and building this V-Twin monster to menace Morocco.

Hailing from the city of Porto, it makes sense that the team at itrocks!bikes have a keen interest in Scram Africa, with the start line in Tangier just a quick spin down the Iberian Peninsula and a short hope over the Strait of Gibraltar. Made up of trio Osvaldo, Ana, and Luis, they stay committed to their signature monocoque bodied built bikes, but the chance to build a Scrambler for such an epic event was too good an opportunity to pass up. Here is where the rubber really meets the road, can you as a builder craft a custom bike that can hold up to the ultimate torture test.

An XV is a left-field choice, past years have shown a preference for Triumphs, Enfields, BMWs and other makes and models that either have an off-road bent or certainly have an aftermarket to support their conversion into a legitimate scrambles machines. But the XV1100, is a legitimate cruiser and makes the efforts of IRB even more admirable! Wisely they’ve chosen to use a 1996 example that has the old school looks but comes with years of minor improvements. To start the build, one thing was clear, the pressed steel chassis was simply not going to be up to scratch.

So, into the jig it went, and the backbone and neck areas have been strengthened to cope with the abuse to come, while still retaining the factory front engine mounts. Further rearward and a new tubular frame has been bent up and built, with extra reinforcement added around the swingarm pivot point. A new rear subframe completes the frame, with an upswept tail that helps the rider sit ‘in’ the bike, while still having plenty of room to move around before it was all coated in a hard-wearing black finish.

The changes meant the stock fuel tank would no longer fit, and here you enter one of the most admirable parts of the build. Rather than rely on an alternative factory replacement, the crew at IRB have handmade all of the bodywork, confident in their ability to produce parts that can handle the harshest of conditions. The first of these parts is the new fuel tank, 16 litres in total, it offers both beautiful lines and generous reliefs for both the rider’s knees and the new front suspension to come. In front, the headlight surround gets an almost Meccano look as it holds a set of LED projectors to light the path ahead.

The steelwork continues with a set of fenders essential, and each is built to be both effective at kicking out the sand, while also strong enough to withstand the impact of the odd rock and other remote Morocco surprises. But soaking it all up takes a serious suspension setup and here the team thought long and hard as to how best attack the various road conditions. At the rear, twin fully adjustable Bitubo shocks allow for the bike to be properly dialled in. At the front, travel was all-important, and the easiest way to achieve it was to adapt the whole front end from a Tenere 700, which offers 8.5in of travel.

The Tenere also supplies its twin-disc brake package and all-important 21in front rim, while the rear benefits from a custom hub that allows for a 17in rim to be laced up. The stock drum is allowed to operate inside that new hub before a set of TKC 80 tyres was slid on. Powering the party is of course the big factory v-twin, and it really doesn’t need any extra power. So the focus went into adapting a quality Zard 2 into 1 exhaust to ensure it stays high and dry, rebuilding any parts that might impede reliability, and then finally covering it all up in a custom bash plate folded up from aluminium.

Controlling the beast is going to be a hell of a lot of fun, but no easy feat, so to make the rider’s job a little easier, big pegs and Scar x2 bars as used by the likes of Villopoto and Stewart slot into the risers. No official final weight figure was provided, but in an endeavour to reduce the mass and aid easy problem solving, the wiring loom has been replaced by a seriously slimmed down new offering that is based around a Motogadget m.unit.

A host more parts from Motogadget and Rizoma have been added before the bike was given its custom paint job and a very ’60s-esque leather seat. The number plate goes on and we wish the rider, IRB and all those taking part in Scram Africa, Godspeed.