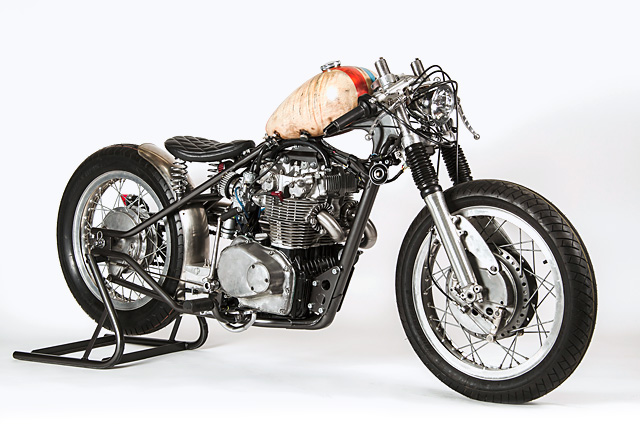 Featuring non-professional builders is something we don’t do nearly enough of here at the House of Burnt Pipes. There’s something incredibly honest about a guy toiling away in his freezing and/or boiling garage at all hours of the night. And for what? Greasy, skinned knuckles and a constantly empty wallet – that’s what. But there’s something else that can also emerge. Something wonderful. Something that art critics have called one of the purest forms of folk art ever created. So here’s Netherlandian Bas Rover’s own little folk art masterpiece, a hardtail Honda CB450 bobber. “My name is Bas Rovers. I’m from the Netherlands and I am proud to say that I’m addicted to motorcycles. All sorts, shapes and sizes – I love working on them and building them almost as much as I do riding them. I am an amateur builder and this is my latest project. It took almost two years to complete, and it was worth every single second.” Bas used the bike to race in the Classic Bike Championships in Belgium. He’d purchased the bike about 10 years previously in the Netherlands as a derelict street bike and built it up from there. The running gear and frame were okay, but the rest was beyond repair. It didn’t matter though, as Bas bought it with the sole intention of taking it racing. He got stuck in and overhauled the engine, building it up as quite a nice little circuit screamer. “I raced it for almost two seasons until a crash put me and the bike out of contention. Not wanting to return to racing, it was then stored in boxes for a couple of years until I decided to rebuild it for the road; to create a hardtail bobber but with a racer twist. So it was completely redone from the ground up. I also wanted it to have a hard-core, well-used feel to it.” If Honda came looking for their bike back, they’d find that only part of the frame, the engine, front forks and rear hub are the original items. “Everything else is hand-built, modified, custom or sourced from other bikes and suppliers,” says Bas. “The front brake is from a Suzuki GT750, the rims are Borranis and the clip-ons and levers are Cuppini items. The aluminium battery box and stainless steel exhaust were made by a friend, and I wired a new custom loom from scratch. The tank is a replica Sportster tank, painted and aged by another friend.” “Maybe I’m a little too close to the project to be unbiased, but I think the end result looks pretty good,” gleams Bas. Don’t worry, you’re not the only one. Not by a long stretch.