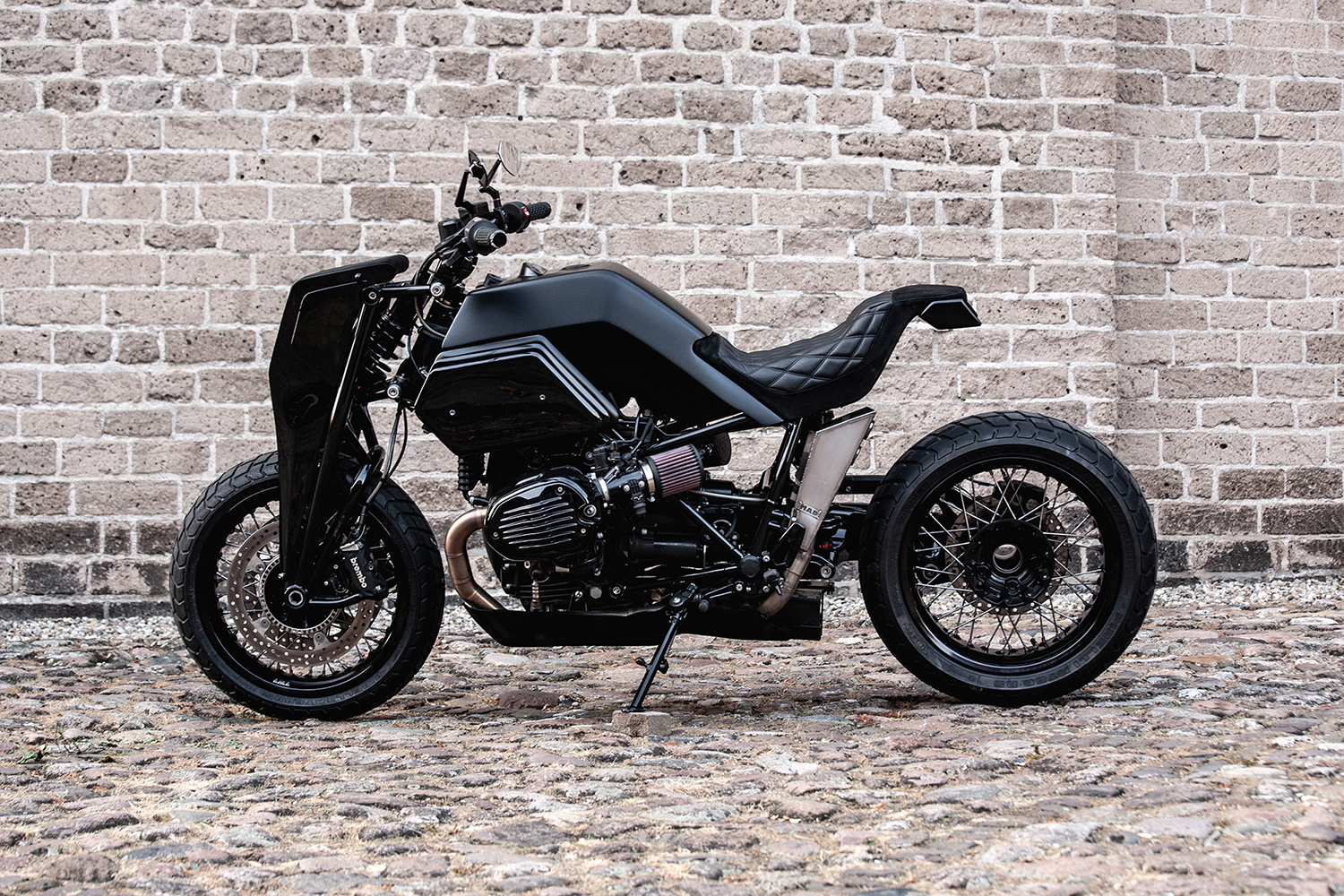 No matter what the creative endeavour, whether you’re a sculptor, making music or building custom bikes, if you want to get paid, then you’re in the people-pleasing business! And oh what a fickle bunch the public can be, one minute you’re the king at the top of your game, the next you’re on celebrity rehab or some other reality TV show for washed up has-beens. But not the crew at Netherland’s Moto Adonis, they’ve been producing non-stop hits for the past ten years, so much so that their most recent client gave them carte blanche. Pick the bike, pick the style and build it as you see fit; the result is this otherworldly BMW R nineT with one of the best front forks you’re ever likely to see.

“The build of this bike began with a question. Instead of supplying us with a motorcycle, the customer asked us: Which bike do guys you want to build? Surprise me! A different way to start a custom build, but we are always up for a challenge!” smiles Arthur Renkema. But remember that thing about being in the people-pleasing business, now the guys had to deliver and at the first step, the customer was a little concerned.

“To be fair, when we showed up with a completely stock BMW R9T he was not thrilled about it at first glance, but when we shared our ideas and showed our drawings and photoshop models he completely turned around.” Relief! But building such a radical design into the real deal from a drawing is no easy task and with that insane front end a big part of the plan it made sense to start with the hardest part of the job.

This was no one and done process, the whole idea behind the bike was to have wild futuristic visuals but also be completely rideable in a way that offers a unique two-wheeled adventure. To help on the front end, the team at Wimoto was drafted in, engineers who combine the latest 3D computer modelling with old fashion craftsmanship. The result is as good as it gets, a custom Wilburs shock controls the girder fork, with a trellis lower design and incorporated radial mount for Brembo brakes.

With a girder acting in a completely different way to conventional telescopic forks, a custom shock to suit was also needed for the rear and once again Wilburs came to the party with a fully adjustable custom unit. These changes alone would make for a hell of a bike, but progress stops for no man and Moto Adonis was already moving on with the wild bodywork. All of which is handmade from aluminium to keep the weight as low as possible.

But before the alloy was offered up to the English wheel, hammered and welded, the designs were first made from cardboard and tape until they were perfect. Happy with the look each part was individually made, from the imposing tank, to the fork covers and all of the grilled out components that combine to give the BMW a truly sinister look. And the best way to make that menacing metal stand out even more was to coat it with a mix of black, matte and gloss.

The seat too, by Miller Kustom Upholstery, is all black with diamond stitching used to accentuate its lines. To continue the monochrome effect, the lighting is all clear, with the rear tail light made from clear, grille matching, polymer that has LED lights recessed into it. The same effect is used at the front of the bike with the white LED lighting shining through those wild fork covers. With the instruments replaced with a Motogadget speedo in the tank, Arthur tells us they managed to pull 10kg out of the front of the bike alone.

With weight down it was time to get the power up and with Moto Adonis behind the MAD exhaust brand they more than had it covered. A full handbuilt stainless steel system starts with big diameter headers that merge under the bike and blast out of a custom-crafted muffler of their own design; matching the bike’s unique looks. With a custom ECU tune from Tovami and pod filters the boxer twin purrs and with their Rev’it protective gear – yes, they are a sponsor – thrown on it was time to let it rip!

The client is understandably over the moon, with a Moto Adonis masterpiece that would look right at home in a modern museum collection, and that incredible suspension setup giving a ride like nothing else on the road. The people, are pleased.