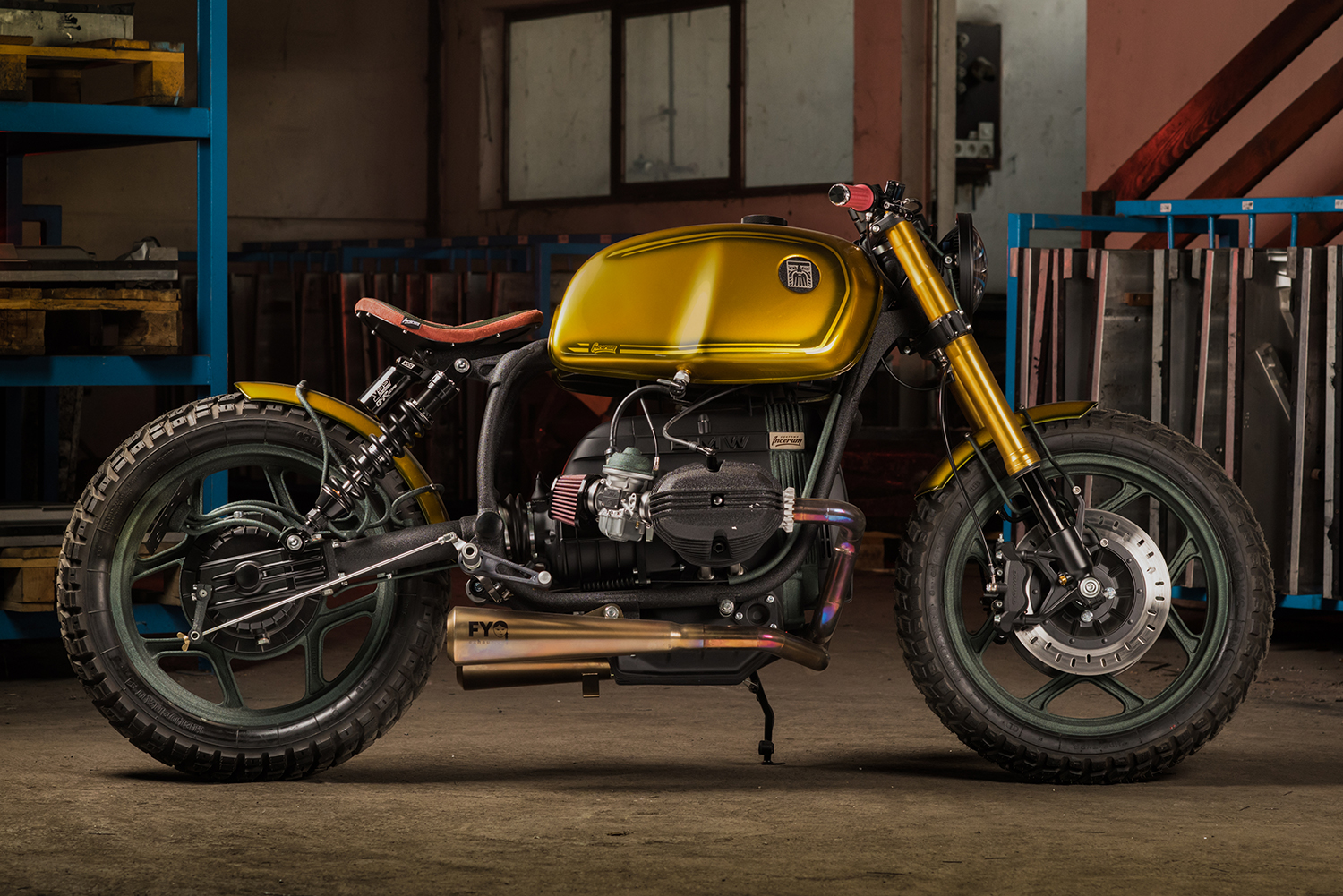 It’s time to address the elephant in the room; why does every custom motorcycle show, magazine, blog, and workshop feature and build so many BMW Rs? The answer is pretty simple, they’re just a bloody good machine! But in addition to that, they can be turned into absolutely any style you can imagine, the engines are bulletproof, and they are both fun and easy to ride. So, if you find these qualities attractive in a motorcycle, want a custom built bike by an absolute craftsman, and still want to stand out from the crowd, then Incerum Customs is your answer. Here Croatia’s Antonio Ferhatović builds the best and this 1984 BMW R80 combines art and alchemy to deliver a truly beautiful Beemer.

In just the same way that an R can be built into any style, they were literally built in an enormous number of configurations by BMW themselves, and this too has no doubt led many to be inspired to take them to their logical endpoint of refinement and customisation. The R itself is part of BMW’s alphanumeric naming system and stands for boxer twin, the numbers that follow indicate the engine capacity and the final letters like RT and GS stand for things like Road Touring and Gelände Sport (Dual Sport). This particular example left the German factory in 1984 as an R80 RT, and in the monoshock version, but there is barely an inch that Antonio has left original.

With an enormous number of high-end R’s under his belt, Antonio has a process as to how he goes about building his bikes. It of course starts at the foundation, the frame, and to get to that means stripping off absolutely everything else. Then the frame is prepared for the modifications to follow, a host of brackets and tabs are cut off, welds are checked and perfected unless they’re flawless, new mounting points are added and the whole thing is smoothed out. The original subframe is removed and tossed aside, and the frame is prepared to allow for the entire wiring loom to now call it home.

Before he was finished, this build required one of his custom short and narrow subframes to be welded on, and then it was time for a crinkle effect and greenish-tinged powder coat to be laid down. You could hit this stuff with a hammer and it won’t chip. The wheels and final drive are next, both have been stripped down, with new bearings knocked into the wheels and the shaft system rebuilt. They are then both hit with powder of their own, even more green is mixed in for the wheels, while the drive housing gets a flat black.

Those new look wheels get wrapped up in Heidenau K60 dual-sport rubber, the rear gets a set of titanium bolts, and the front wheel a custom axle to prepare it for the suspension to come. The front end is brought into the 21st century with a full replacement from a 2010 Kawasaki ZX10. Interestingly enough, while the calipers are the radial Tokicos that come with the ZX, the brake discs are factory BMW parts and help to create a stunning and yet functional mix of old and new. With Incerum a YSS dealer, one of the company’s fully adjustable rear shocks gets the call up, and inverted Ducati Monster bars take care of the steering.

In preparation for the mix of factory and custom bodywork he was envisioning, Antonio made a host of mounts that deserve attention and appreciation. Both the rear fender and number plate bracket are made from round bar, just not in the traditional way, they are bent up in such a manner that they take on an organic, almost plant like effect. For the front, a simplified version of the same bolts to the fork lower legs and the tank mount sits the steel dead flat. Attached to these are two absolutely flawless fenders that are rolled in-house.

The stock tank remains, but not before it has been panel beaten to perfection, the stock filler cut out, and a new milled twist on cap unit welded into place. Then it was time for that paint, and boy oh boy does Antonio land the trick! The gold finish, with Incerum badging and watermark, is further brought to life with a ghosted pinstripe that uses a black to dark green fade, that expertly matches the powder coating on the bike. To add in some further elements of colour, the single seat is stitched with that green and a new earthy red, that is brought over to the handlebars and grips.

Of course, the 800cc engine couldn’t remain stock and it was up on the bench for a complete rebuild. The Bing carbs get the same, with a re-jet, and then it was back with the powder in the green, crinkle black, and flat black finishes to bring the whole theme together. A set of pod filters add an induction raw, before Incerum’s own FYG exhaust brand was called upon, with the stainless model X system using a cross-over pattern to improve torque, and perfect hand-built mufflers to finish.

LED lighting is used all around and with the loom in the frame, you barely see a literal wire out of place. So yes, the mighty BMW R is everywhere, but you’ll have to be some kind of builder to craft one as good as this.