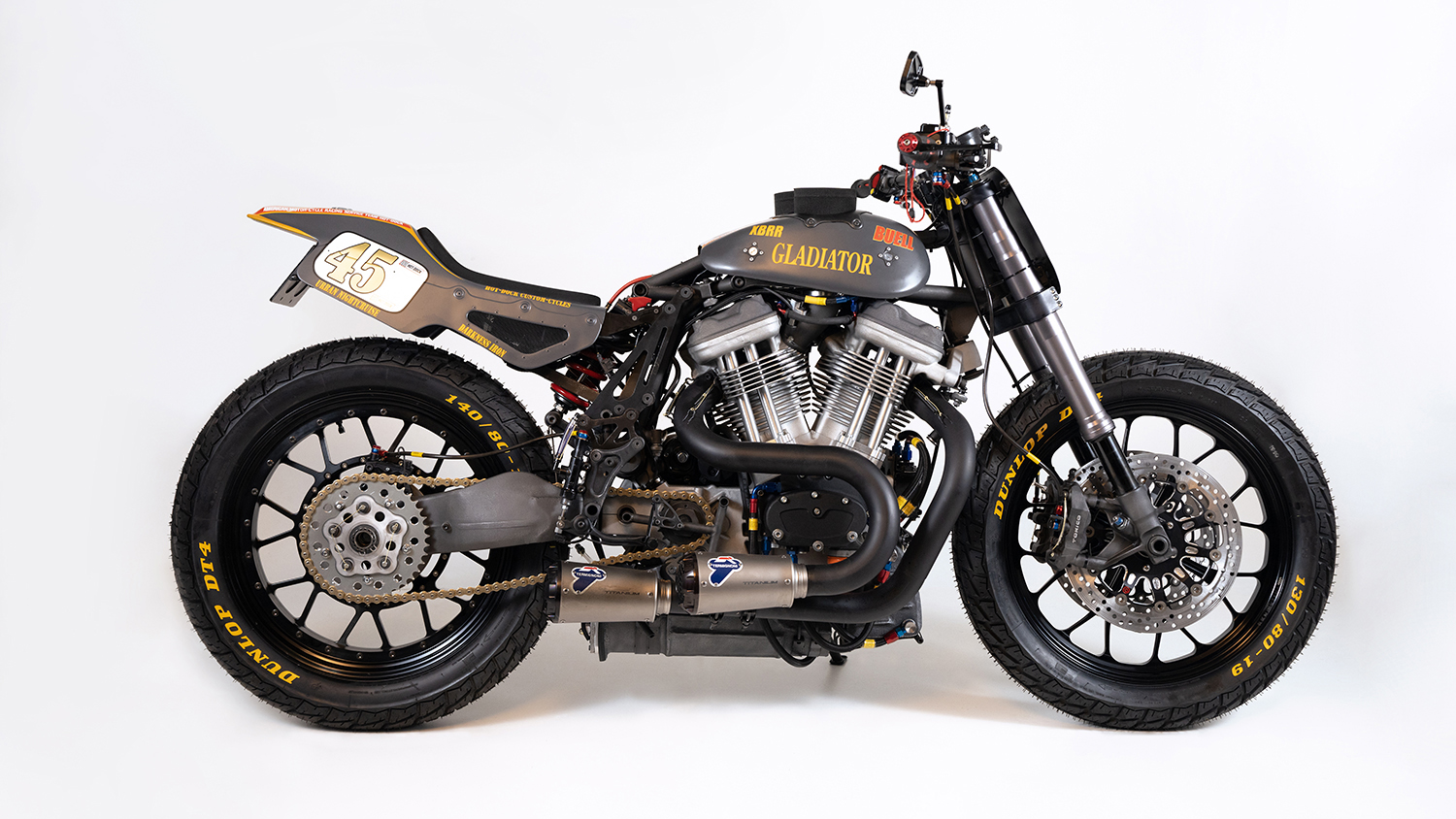 It has been a consistent theme over recent years that many of the best American V-Twin muscle bikes have been coming out of Japan. It really shouldn’t come as a surprise, with the first Harleys arriving in Japan 110 years ago, and then being produced under license by Rikuo, who didn’t always pay those fees. For Keiji Kawakita, American machinery has been a lifelong passion that he’s committed himself to with every fibre in his body. Founding Hot Dock Custom Cycles in 1984, he’s won world custom bike building titles and crafted incredible race machines. Now he’s taken a very rare Buell race engine and hand-built a one-off beast, an XBRR powered street warrior called ‘Gladiator’.

With 40 years in the business, Kawakita-san has seen and done it all, winning endless trophies from the judges at the world’s biggest shows and taking home the silverware at the track with his purpose-built race bikes. He’s always favoured Milwaukee muscle for his power plants and over the years has come to build his own complete frames, only ever needing the engine for a donor. Having witnessed the amazing work of Bottpower, it got his mind thinking about what could be done with a Buell, and if you’re going down that path, why not go with the 150bhp stump puller from Buell’s XBRR race bike, of which only 50 were ever produced.

So, with the big V-Twin lump bolted into the jig, it was time for a chassis to be built. “The main frame is arranged to suspend the V-twin engine. The steering stem and rear suspension mounts are set at both ends of the frame, and the trellis frame is a combination of chromoly tubes. Then the frame and engine are connected by a rubber mounting system for Buell,” Kawakita-san explains. Then came the part that was most crucial on a design such as this, getting the swingarm to perfectly align off the rear of the engine, to make it even more complex a Ducati single-sided unit was used, and inverted to deal with the right-side drive.

It is then from here that Kawakita-san finally welds in the steering tube, and past experience with a custom race Buell, led him to allow for a little more rake and a slightly stretched out neck. Both of these features are to give a longer wheelbase, and a less radical steering angle to make the bike better for street riding and not so aggressive in the way the bike turns in. “Another key point of this bike is the 19-inch rear wheel. I really wanted to put on Dunlop ‘DT4’ tyres, which are used by AFT in the US now and are specially designed for flat track racing.” One small problem, there were no billet wheels on the market to suit the application.

When you’re a genius, this is simply an invitation to build your own, and the rear wheel was entirely built from scratch at Hot Dock. The hub was a little tricky, being both for a single-sided swingarm and also needing to be offset to ensure perfect alignment. Being fastidious about the feedback a rider receives through the rear tyre, Kawakita-san painstakingly used his reference book of race bike specs to craft a set of mounts and linkages, before having Bitubo custom build a rear shock. The front forks are Showa items, taken off a Kawasaki, that bolt in with a custom set of trees. As for braking, it all had to be high end and the Tokico and Brembo combination provides bulk stopping power.

All of which is needed with the way that thunderous twin fires the bike off each turn and as good as it is, Kawakita-san wasn’t going to leave the XBRR lump stock. The short stroke engine can rev to the moon and combined with 1340cc that makes for a lot of power. So, to keep it all reliable, a new set of JE pistons are dropped in the bores. Feeding the thirsty beast is a fuel injection system based around the two enormous 62mm throttle bodies that poke up vertically and give the rider a face full of induction noise. All of which is only matched by the exhaust, which features hand-bent Hot Dock headers and twin Termi mufflers.

Of course, what makes it possible for those twin intakes on the stock bike to sit where they do, is the fact Buell stored the fuel in the frame. With the Hot Dock bike now featuring a custom chassis, Kawakita-san felt the best way to get a decent amount of go gas on board and improve the centre of gravity at the same time, was to store it under the engine. The oil too is stored in the same way, mounted in front of the new fuel unit so that it can run directly up to the custom oil cooler. A big spend on aircraft style fittings and hoses ensures that no leaks should ever be a problem, and the faux gas tank simply keeps things looking like a motorcycle.

The flat track theme continues with the rest of the bodywork, and once again the seat unit and the tail with built-in number boards are crafted in house. So to the front number plate which features a small LED headlight, hidden behind a meshed off grille for a sinister nighttime appearance. A set of Pro Taper bars, Brembo master cylinders and Motogadget goodies serve to ensure the rider is right at home.

But then, how comfortable can you really be when wrestling such a beast through the back streets of Japan. Sure, you might pucker up a little, but that’s the point, because ‘Gladiator’ is designed to tickle your senses right up to that moment where terror and triumph collide.