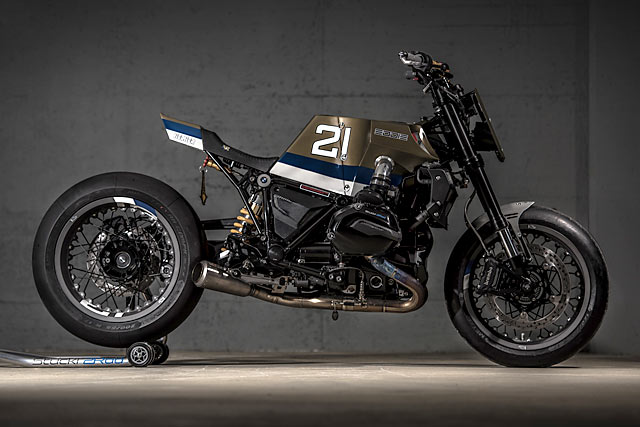 Think about American motor racing legend Eddie Lawson for a moment. You’re probably picturing him on the early 80s Kawasaki Z1000 he made famous. Or maybe it’s the mid 80s 500cc World Championship Marlboro Yamaha. Or, at a stretch, it could be his Rothman’s Honda of the late 80s. And unless you’d had one too many disco biscuits, a BMW boxer is probably the last bike that was on your mind. That’d never work. Or would it? Maybe we’ve all had one too many biscuits, because from the moment we laid eyes on this Eddie-inspired No. 21 R1200R, the latest build from Switzerland’s VTR Customs, we were smitten. Eddie on a Beemer? Human sacrifice? Dogs and cats living together? Count us in. We think it’s fair to say that VTR’s first ‘Goodwood 12’ R1200R, a bike that broke cover in early 2016 and that went on to win second prize in the 2016 Essenza Design Jury Competition and third place in the race rankings, was one that made quite the splash globally. Being human, they decided that if they could do it once, then there was a good chance they could ring that bell again. And when you’re one of Europe’s best custom shops with the backing of Switzerland’s biggest BMW dealership, we’d say that their ‘chance’ is a pretty good one. “We toyed with the idea of a build that was somehow related to the Goodwood 12,” says Dani Weidmann, owner and General Manager of Stucki 2 Rad and VTR Customs. “In the end, we decided to go for a completely new shape. So we needed an idea to inform the build, and since we are all old petrol heads that started our racing careers in the 80’s, we realised that we were all heavily influenced by Eddie Lawson’s cool AMA Kawasaki Z1000 in the early 80’s. So it was decided – we’d build a BMW R1200R styled on his bike.”

The specific design would try to emulate the Kawasaki Z-style ‘squared’ lines with a scaled-down, Z-style tail. Naturally, the paint would also have to be in the Z1000 style and include a nice, big racing number plate at the front. And let’s not forget the best parts – a ‘Kerker’-style exhaust system and as many high-end racing parts as they could possibly afford. Gentleman, start your cheque books! “To get the desired overall look, it soon became clear that this time we would have to modify the standard R1200R airbox and gas tank,” says Dani, referring the standard tank and box on the Goodwood 12. “Otherwise, we wouldn’t be able to get the squared ‘Z’ look we where hoping for.” Since VTR do all their metal work in-house, they started by hand building the tailpiece, and then they moved on to the airbox and tank. Dani’s biggest challenge was obtaining the metalwork’s required shape. He wanted to get the bike’s lines as low as possible, but he also had to match the bike’s existing line that was being dictated by the factory subframe and chassis. Then, while they were elbow deep in the airbox build, they came up with the idea of relocating the instruments to its upper surface, freeing up the bars to be as clean and minimal as possible. “We also love our craftsmanship, so when it came time for the seat to be made, is was down to the talented hands of Yves Knobel, our go-to seat and upholstery guy. All the bike’s Logos were hand painted by Johanna Voglesang, and the rest of the paint job was done by our ‘house’ paint shop, Freuler in Benken, All of them are close friends of ours, and their businesses are quite close by.” And that race shopping list we mentioned? There’s Kineo custom-made wheels with a 6 x 17 rear and a 3.5 x 17 front shod in Bridgestone racing slicks at 200/55-17 and 120/70-17. The exhaust is an Akrapovic Titan downpipe with a fully open Unit Garage muffler to finish it of. As Dani notes, “It shoots half meter flames out of the can when it’s quick-shifting through the gears, and it sounds like hell!” In addition, the rear shock is an Öhlins item and the brake and clutch masters are Magura HC3 race items. There’s also a Rizoma gas cap, and BMW HP racing footrests. With the Swiss bike show having been and gone in February, we were keen to find out how it had performed. “It went really well,” says Dani. “So well, in fact, that we were again nominated for Essenza.” Not heard of it? Put simply, it’s a custom bike contest with a mixture of concours shows and sprint races. “Only very few private bikes are included, as most of the ones that are asked to attend from the big motorbike makers themselves.” And that weird mirror and or card thing in the shot above? Yeah, we asked Dani about that, too. “Amelie Mooseder, who works for BMW Motorrad in Munich, was our pilot for Goodwood 12 and she will also be riding Eddie 21 this year,” says Dani, smiling. “For good luck, she always puts on some lipstick before racing. As you can probably imagine, it was a bit of a hassle for her to do this on a bike without mirrors, so we added a little something to make sure she would sign on for another year. It says ‘Amy Special’ on the front, and it has a mirror on the inside.” So, are you sold yet? A BMW for ‘Steady Eddie’? It seems a lot like rewriting racing history, but with what VTR have done with this bike, it’s almost like Eddie should have been riding a Munich Marauders all along. And the name ‘Stabil Edmund’ does have quite a nice ring to it…