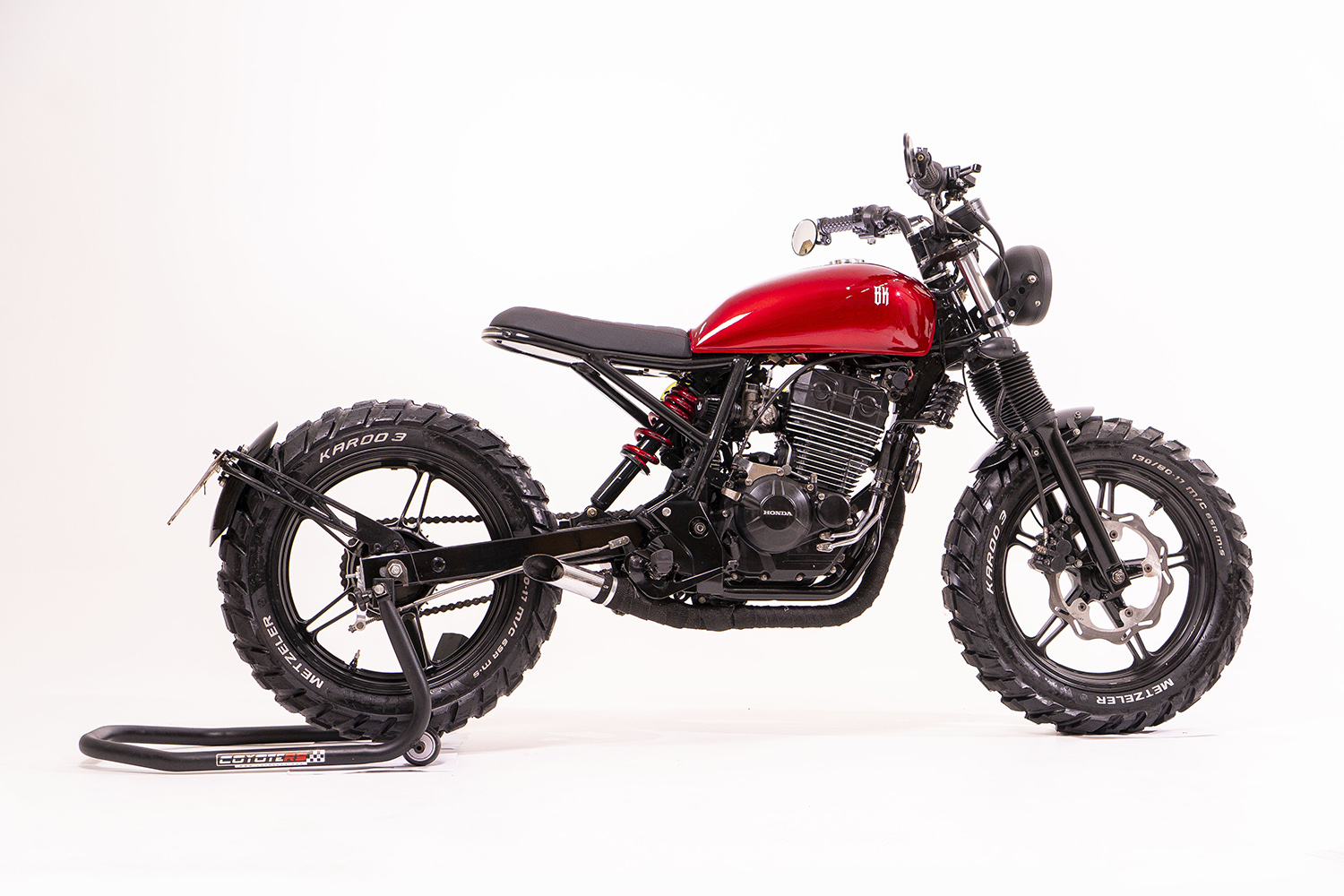 Last year, I was lucky enough to judge the Colombian-based Custom Built Show, which features the best custom bikes from all around South America. I was blown away by how many creative projects were being built out of motorcycles that even the most experienced builders wouldn’t dare touch. With thousands of cheap, small-displacement commuter bikes available in Brazil, sometimes it just makes sense to work with what you’ve got. Even then, when a client brought in the plastic-clad Honda CB300F into the BKing Kustom workshop – a bike that is common but rarely customized – the team had to work some magic to make a silk purse out of a sow’s ear.

BKing Kustoms is a family workshop, where brothers André Silva and Yuri Pereira continue the passion for motorcycles started by their father Sérgio Bozo, who has been customizing and renovating old motorcycles since he can remember.

“In 2019, our client and friend, Vinicius Oliveira, came to us with a project that until then was extremely unprecedented for us,” says André from BKing Kustoms. “To transform a Honda CB300F into a scrambler, with a hillclimb look but for urban use.”

Because the Honda CB300F is not a very customized motorcycle in Brazil, the BKing team didn’t have many references or sources of inspiration to start the build. “Giving up was not an option and we decided to face the difficult work, and even despite of all the limitations that the original chassis presented for this project, the challenge was accepted.”

They started the build by removing all the ugly plastic parts, the seat and the headlight, then made some cuts to the frame. Like a lot of their previous builds, they chose to use a small 100cc tank. To make the tank work, they had to remodel the rear sub-frame so that the design would be harmonious without losing the lines of the bike.

After removing all the plastic and cleaning up the subframe, they then had the challenge of hiding the wiring, fuel injector sensors and the battery that were all now exposed. “Not an easy job, as it was an injected motorcycle,” recalls André. “With dozens of sensors that were not inserted and simply eliminated, the job took some time to complete, but we managed to hide all the paraphernalia of wires in a clean way.” The stock Honda fuel pump was too bulky to hide without it sticking out like a sore thumb, so after a bit of research they sourced a smaller pump similar to the original.

The rear swing-arm and front forks were both kept stock, simply adding classic-style fork boots on the suspension. The front headlight was replaced with a more modern LED unit. At the rear, a simple LED tail-light strip was embedded in the new rear seat hoop. The black and red-stitched seat was made in-house with the BKing logo embroidered at the back.

Now that the bike was almost complete, a new pair of shoes were fitted. Because the client wanted a ‘hillclimb scrambler’ look, a pair of Metzeler Karoo tires were used, which gave it the aggressive off-road look they were after.

After 90 days of brainstorming and building the bike, the end result was exactly what the client wanted. But the most surprising thing about the bike, dubbed ‘Lil’ Monster’, is how well it handles. “The riding was exceptional even with the tires, fast in traffic and drawing attention wherever it goes. This ‘Lil’ Monster’ opened the door of our workshop to the world and proved to ourselves that we are capable and ready for bigger challenges.”