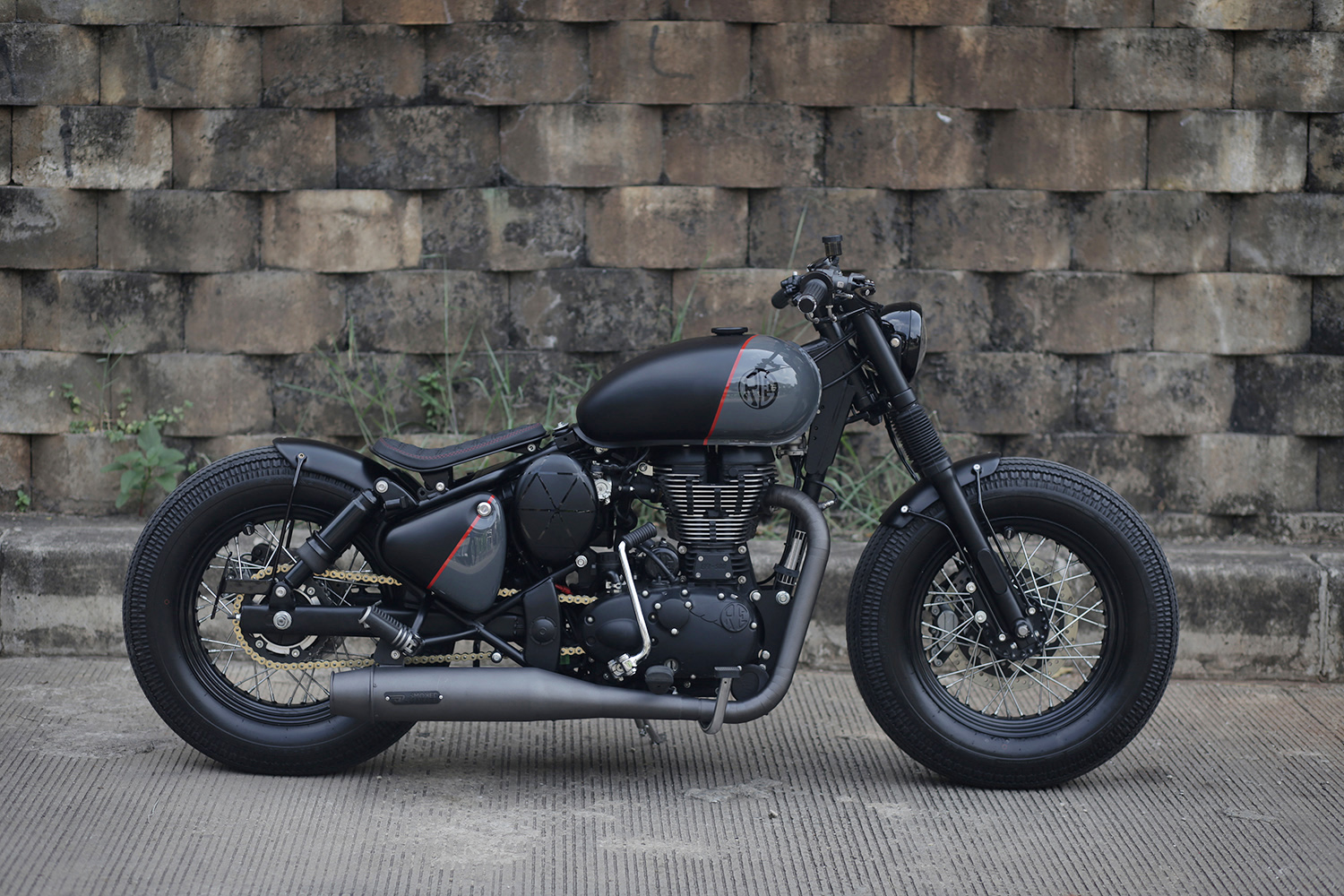 A custom bobber is simply one of the coolest things you can ride on the street, but given they are usually just for bar hopping or heading to your local cafe, the prices can be crazy. Start with a Harley-Davidson as the basis and the price can triple, and suddenly there just isn’t that much money left over for a beer or an espresso – and where’s the fun in that. So it comes as no surprise that more and more builders are looking for alternatives to the Milwaukee brand. Presented with a Royal Enfield 500, Bali’s Smoked Garage knew exactly what to do and even the bike’s name ‘SG Royal Black’ sounds like the perfect coffee to end a Sunday cruise.

Starting with very humble beginnings back in 2004, Smoked Garage has grown to be one of Indonesia’s largest custom bike outfits with more than 16 mechanics on staff and a host of other talented personnel. In the heart of the tourist island of Bali, they get maximum exposure and their bikes never fail to stand out from the crowd. So back for another build is one of their loyal customers, Irul, who rolled a brand new 500cc RE Classic into the workshop.

“While having a cup of coffee we started to sketch around until we decided that the bobber look was the best suit for it. We also love the pre-war motorcycle look where the history of Royal Enfield is very thick so it was kind of a no-brainer to go for the bobber look,” explains founder Nicko Eigert. In penning the drawings for the build, all agreed that the bike needed to be low, slammed to the deck low, and they had a cool idea of how to achieve it.

“We wanted to make sure that it has stance, so we installed air suspension on it so that once we park it we can slam it to the ground,” Nicko smiles. But it’s not as simple as simply swapping out shocks and fork internals, in addition to the extra hardware to run the system, the guys had to modify both the swingarm and the subframe so that the bike was capable of making full use of the air suspensions travel. Next up for the two-wheeled hot-rod was a wide wheel conversion and this too required some creative workmanship.

The swingarm came in for some extra modification for clearance, but the big change was to the front end. A new set of machined triple trees shift the forks out wider and also add some extra rake to help the big rubber clear the down tube when the suspension is at maximum compression. The stock hubs are retained, now laced up to a set of 16x5in black rims that are wrapped up in super beefy vintage rubber. To slow the increased rotating mass, a set of custom brackets was fabbed up and Brembo calipers fitted front and rear.

“For paint we went with our Smoked Garage x Royal Enfield iconic colours, which is the black and red highlights.” Variations of the paint scheme can be seen across a variety of the workshops Enfield builds, but for this RE the satin black was laid on extensively, only helping to enhance the tough vibe. With air suspension on board, the fender fit is even more important and a set of hand-rolled pieces fit for the job are held on by a slick set of custom struts, both front and rear. The tank and side covers get the best of the colour scheme, with a custom fuel filler cap for good measure.

To match it all, a custom seat was in order, that begins with a hard-mounted pan to keep it all tight to the body. This is then beautifully trimmed in black leather with red stitching for the outline and black for the side-by-side triangle effect. To match the low and tough look, you can’t go past a set of drag bars and keeping them uncluttered was a top priority. Slick new controls and switches get the job done for the minimalist look, and there is nothing better than a Brembo radial master cylinder to take care of braking feel at the lever.

To keep the clean look going, the whole bike was rewired with a Motogadget m.unit and new ECU, with the speedo on a clever mount just below the bars. The lighting is all modern LED stuff and you’ll have to look hard to find the barely-there taillights until they’re illuminated. But you’ll no doubt hear the bike before you see it thanks to a custom header pipe for the single-cylinder engine, that barks out of a custom SG muffler. The finished product is one bad-ass bobber with a whole host of clever touches. And in Indonesia and many parts of the world, price-wise you can either have a stock Harley with some miles on the clock or an SG Royal Black, to me, it’s no competition.