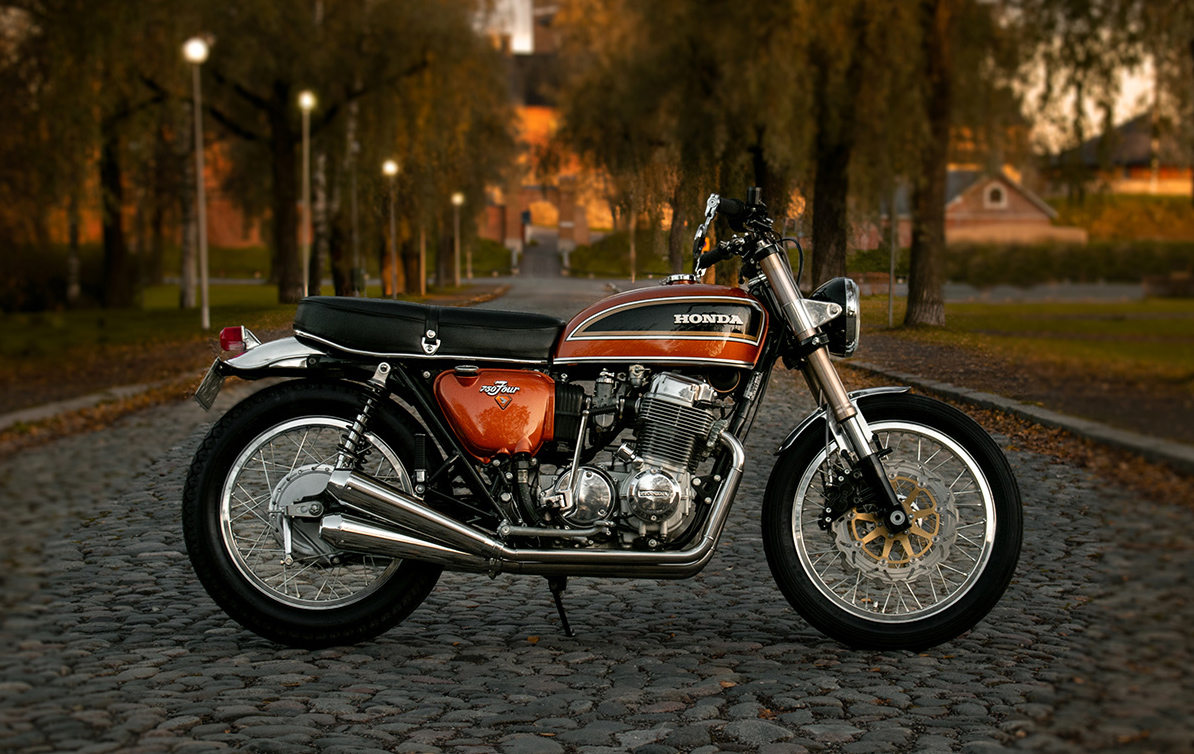 If you follow the world of four wheels then you’ve probably seen the crazy money that a Singer Porsche goes for or even one of the incredible Alfas by the boys at Alfaholics. The resto-mod scene is booming, but outside of one very well known workshop in Japan, the two-wheeled world only seems to see a mere splattering of such machines. Given the very artisan approach to such creations, who better to bring to life a resto-mod motorcycle than a Finnish operation called Steel Bakery. Here, Henri Ikola takes a hands-on approach to bringing you your old favourites with a gourmet twist, and his Honda CB750 is one very tasty treat.

By day, Henri has a job that simply sees him going through the motions, “I’ve worked as machinist and mechanic designer however nowadays I oversee customer relations in a car dealership.” So, to add some spice to his life he builds custom motorcycles on the side and scored a raging success in 2014 with his handbuilt streetfighter meets cafe racer Kawasaki GPZ750 that took home a bunch of awards. He’s kept plying his trade over the years and with the CB celebrating 50 years on planet earth he decided it would make a fine next project.

But rather than follow the pack and do what everyone else was doing, he turned to the resto-mod style of build, as it would allow him to retain the true essence of the legendary Honda, while using all of his bag of tricks to keep it look as period as possible while performing at a modern level. Working at the time on a Jawa, he noticed a CB750 on Facebook Marketplace, “So I called the person selling the bike and brought it back to my garage same night. The CB750 that I bought had been mistreated and its engine was not running properly and since the idea was to build a resto-mod still very recognisable for Honda CB750 instead of restoring it, it was perfect.”

Starting with that glorious four-cylinder engine, it was soon obvious to Henri that the thing was trashed. The head had a crack in it, every last bearing was shot and it was in a very poor state visually too. So a full rebuild commenced with a set of oversized pistons slotted into the freshly re-bored cylinders. That classic bank of carbs was rebuilt and overhauled to look like new again and the airbox retained for a stock appearance. Then before it was all put back together, the entire drive train was soda blasted to bring it back to its brand new best.

Shifting his attention to the frame, it was given a total tidy up, the whole thing coated in black powder and every last nut and bolt zinc plated. Not a fan of the stock swingarm, and not wanting to swap in a modern alloy unit, Henri went hunting in the Honda back catalogue. “The longer and tubular swingarm from CB550 was perfect for the desired style.” Can you make a bike better than new with the parts available to the original engineers? It seems the answer is yes! And the Borrani rims, laced perfectly to the stock hubs is just another example, all wrapped up in period Avon rubber.

The suspension on a 50-year-old bike needs a little more, and so the decision was made to not even bother with the skinny stock pogo sticks. Instead, the headstock and steering stem were prepared for a proper front end conversion, utilising all of the mechanical components from a Kawasaki ZX9R. The upper triple clamp has been completely cleaned up and modified to accept stock style bars, rather than clip-ons. While down at the other end of the internally lowered and customised forks are a set of Aprilia brakes and the rear end gets new shocks too.

The all-important bodywork is picture perfect and looks as good as the day it came off the production line, and the seat is no different. But the paint required some extra thought, “In my opinion the European colours on a CB750 are boring. Therefore, I was planning to go with US-style. When I realised that it was originally done with candy paint with quite a large flake, I thought it needed some modernisation as well, so I ended up with orange pearl.” The stock fenders can still be found as NOS, but where is the fun in that, so the artisan path was chosen, with Henri hand shaping new items from aluminium in the stock style and then using the stock mounts, genius.

Lighter, faster, better had really been achieved and it is often here in the final stage that many get it wrong. But not our man in Finland, who decided against the normal m-unit approach to the electrical system and went with an improved period loom, that utilises the old school idiot lights, but adds hidden upgrades like a CDI ignition and modern regulator. The stock headlight was cleaned up and then a UK model Honda Monkey’s tail light was found to be a smaller recreation of the original CB item, perfect!

The finishing touch, those glorious four into four pipes really symbolise the build, old school style, made from modern stainless by Steel Bakery and timeless in every single way. With a Chef this good, this is a classic favourite re-imagined that I could eat every day and always want to come back for more.