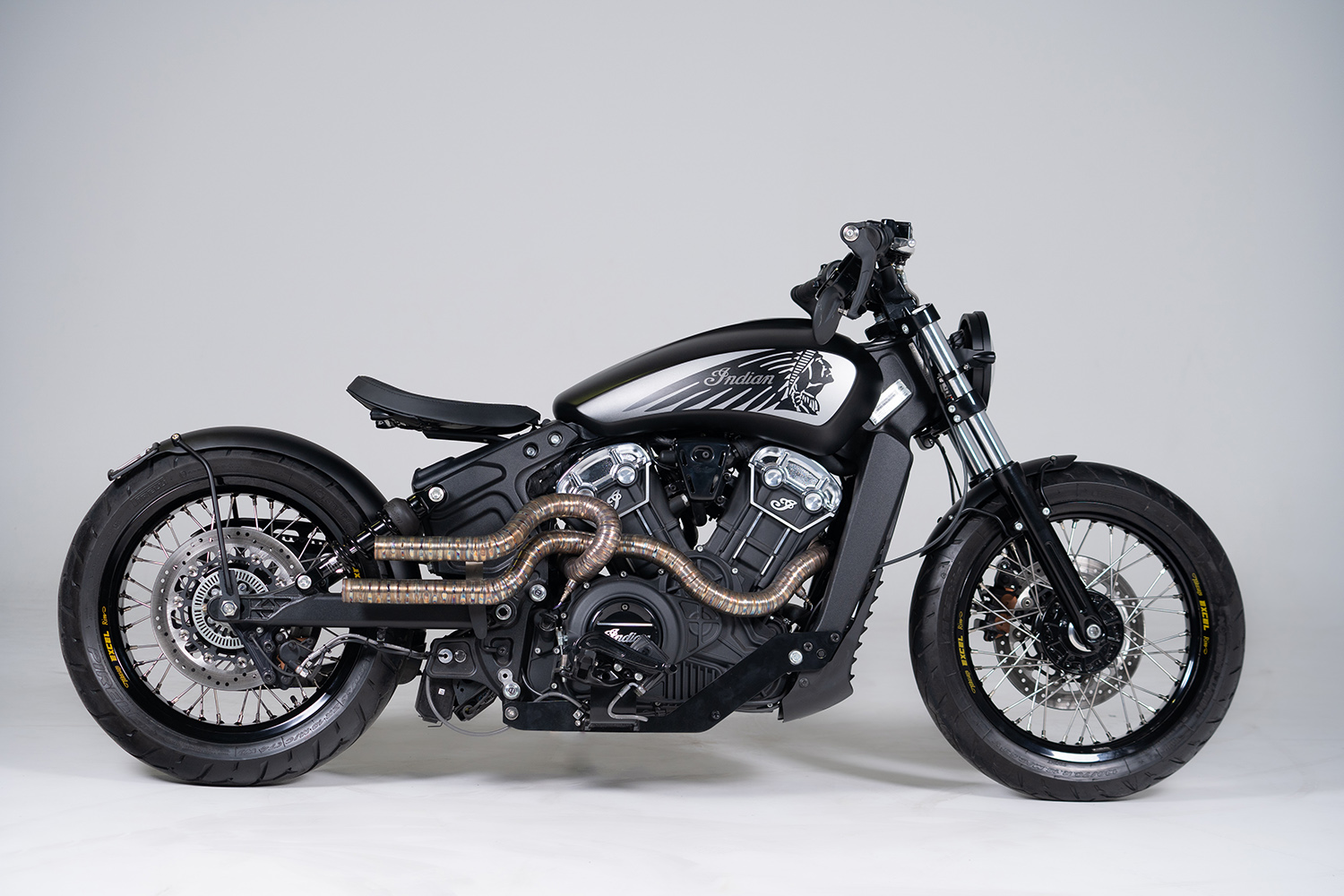 The Australian state of Queensland has long had a tourism slogan, “Beautiful one day, perfect the next!”. This is not only good news if you’ve flown in to hit the beaches, dive on the reef or soak in the culture of the glitter strip, that is the Gold Coast. It also makes for a lot of great riding weather all year round, and one resident of the Sunshine State decided that they needed a new edition to their garage for when it was time to cruise. The 2020 Indian Scout Bobber is an excellent selection for those laid back Sunday rides, but in stock trim, it just doesn’t quite hit the spot. That’s when they discovered Purpose Built Moto and a custom build was quickly underway.

“Our client Jason was introduced to PBM through a friend, which is a pretty unusual way to find yourself a custom bike builder. Generally our clients find us online or through our social media channels, follow our work for a while and eventually fall in love enough to pull the trigger on their own handcrafted motorcycle. Jason came in guns blazing and within a few weeks of hearing about us, we had his brand new 2020 Indian Scout Bobber roll through the shop,” PBM’s Tom Gilroy tells us.

The brief was kept fairly simple but knowing that Jason already owned an MV Agusta F3, it was clear he’d appreciate a bike that handled a lot better than the stock Scout. The first step in making that a reality was a wheel change and although the idea of a 200 section rear tyre was considered, in the end, Tom opted for a 180. Those who think both are too big only need to ride a Ducati Diavel to realise that big tyres can be made to handle, and well! With a set of Excel rims both in 18-inchs, they’re laced to the hubs with stainless spokes and wrapped in Pirelli Night Dragon tyres, 130 the final settling place for the front.

Next step was to lower the visual of the bike and begin work on the controls and Tom started by using a set of custom risers to low mount some Pro Taper bars. Next up attention turned to the seat and with the fenders he had in mind, the stock look was never going to work. “I tore down the factory seat, figured out a front pivot mount and chopped the seat pan up, I took 50mm out of the width, and lengthened the seat 80mm with a slightly sharper kick up to better hold the rider in place. The rear seat mount would have to wait until the rear fender was finished.”

That rear fender hugs the tyre nice and tight and before you take a quick look and move on, there is plenty to learn from Tom’s approach. Not happy with the radius of the blank piece, he used a combination of heat and the English wheel to get it just right. Then moving to the mounts things get clever, the front mounts attach to the swingarm and incorporate a hidden adjustment plate. Then for the rear mounts, using some PBM M8 fabrication bungs, the struts are mounted to the rear axle. “These two mounts allow the fender to be adjusted with the belt tension.” Meaning you can always maintain that perfect gap between tyre and fender, genius!

The front utilises a PBM DIY front fender kit for a slick look and then all the tins were hit with a Matte Black finish, retaining the cool factory silver detailing on the tank. “The Indian runs a 7” Flashpoint Classic headlight up front and a set of 3 in 1 LED turn signals tucked up under the seat on the rear.” Wiring it in is a pain in the ass with Indian’s unconventional electrics, but the look, like that of the rest of the bike, is clean as can be! To finish out the riding position, the forward controls have been ditched and using parts from a Kuryakyn mid-mount kit, and some clever fab the new peg placement is spot on.

But this whole time you just haven’t been able to take your eyes off that exhaust and we’ve left the best for last. “Jason’s request was a complete pie cut system, no matter what it took.” And Tom was up for the challenge. Having ordered over 160 pieces for the job and with his new SWS welder dialled in, it was time to lay some pipe…. welds, sorry. Piece by piece it was put together, over a four day period, roughly 19.8 metres of back purged TIG weld was laid down to perfection. Only from the rear can you see the hidden mounts and the internal muffling ensures it sounds as good as it looks.

To finish the engine out, a cold air intake was fitted and a Dynojet Power Vision wired in, so the team at Dynomite Moto could tune the big twin to take maximum advantage of its new ability to breathe. Tom reports it’s a hell of a beast to ride, the new wheels and tyres with the extra rider input available from the control changes allowing it to really tip into the turns. Then as the road straightens out, you shift your weight to let the rear tyre stand tall and unleash the torque with a twist of the throttle for that freight train-like effect. It’s not a radical makeover by any means, but it’s a custom build done right, better in every single way and now all Jason has to decide when he opens the garage; MV or the PBM Bobber.