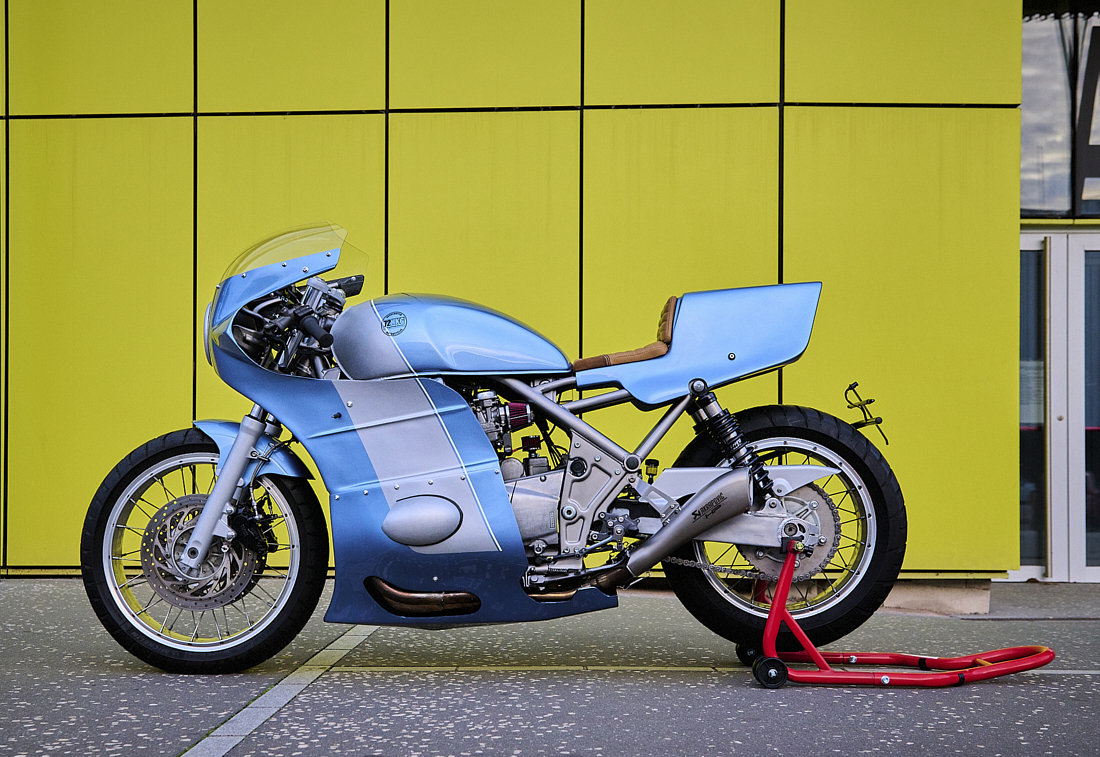 For Jorge and Antonio of Spain’s 72 HKG Performance, there is a simple philosophy that underlines all of the work they do, building unique bikes for unique people. There are many ways to run a custom shop and no single one is right or wrong, but the guys don’t build cookie-cutter machines, they don’t seek to make parts kits or establish a product line. For this pair of performance-minded bike builders, it’s all about establishing a relationship with a client and building for them a truly one-off piece that reflects all of their motorcycle dreams. So, on a trip to see a man about a Mercedes, they ended up meeting the owner of this Kawasaki 1100 and have turned it into an epic endurance racer, with inspiration both old and new.

The story starts when the guys jumped in the car and headed for the city of Pamplona in search of a particular Mercedes they’d been after for a while. Once there, she was right before them, the beautiful lines of a 1973 W114, an underappreciated classic car that can be had relatively cheap these days. Chatting with the seller, Bodes, he came to tell them about this particular Zephyr 1100 motorcycle he owned. He’d taken it to another shop for the full custom treatment, but it just never turned out the way he liked it and was sitting in his garage having barely been used.

Well, a quick introduction to what Jorge and Antonio can do with the spanners, and Bodes was sending the bike and the car back to 72 HKG. A strong relationship was formed as the guys really wanted to know exactly what it was Bodes desired in a custom bike; having been burnt once before, they wanted this experience to be first class from start to finish. The chats went from ’70s endurance race bikes to the custom machines of Japan in the ’80s and some of the cool modern tech floating around today. Confident they knew exactly what he was after, the bike was nicknamed ‘Shozo’, after the founder of the Kawasaki company, that’s how confident they were.

And boy were they right to be, but the finished product didn’t happen overnight and the big ’90s muscle bike would pose some very particular challenges for the boys to overcome. The first task was to tear off all the old mods and get the big girl back to its bare bones. With just the frame and engine sitting inside it, they could see how wide that thumping four-cylinder engine is. But despite that challenge, they were still determined to make a fully faired motorcycle. First, a frame was constructed that is bolted and welded to the chassis to carry the fairing, and this would set the parameters for its lines.

Next, the back of the frame was chopped off, and an entirely new subframe was built, with flawless tube work and welding offering up a brilliant result. Now the sheets of aluminium, the hammers and sandbags could come out as the boys spent more than 200hrs fabricating their way to a flawless fairing. From the front on it is an imposing sight, the reliefs for the handlebars forming jet-like wings, while the sides are pinched in around the height of the cylinder head to narrow some of the frontal space. The lower belly pan comes off as a single piece and incorporates cutouts for the exhaust and a clever cooling duct that is straight from the endurance racer playbook.

The screen too had to be made in-house, measuring a massive 56cm wide, there was absolutely no off-the-shelf solution, but its low overall height ensures that it is not a dominating feature. The big factory tank has been reworked, the lines smoothed out and the filler cap area cut out and replaced with a flush fit pop-up style piece for a smooth flowing finish. Moving to the rear of the bike and the guys were able to find a race tail, that with some clever modifications, fits perfectly over their new frame and integrates brilliantly into the overall design. While Senen Leatherworks used a mix of leather and Alcantara to create the perfect saddle.

Having created such a beautiful machine, the guys didn’t want any ugly wiring or electricals ruining the lines. So a custom loom and electrical system have been built from scratch for the bike. The battery, starter relay and Motogadget m.unit are hidden in a custom enclosure within the subframe, with the lighting made up of an LED headlight, tiny turn signals and 3 in 1 lights for the tail end. Ultra neat switches sit on just one handlebar and a further button is incorporated into the steering stem top nut. Modern tech is then dialled up to ten, as you use a smartphone to start the bike, there is no need for keys, and a phone charger is also part of the package.

But this is also a bike built to be ridden and the suspension gets a huge overhaul with adjustable Hagon shocks in the rear and progressive springs at each end of the bike. The wheel package keeps a classic 19/17in combo, but they’re built for modern tubeless tyres, and the Brembo master cylinder brings the brakes up to scratch too!

The rebuilt engine gets some big jets in the carbs and pod filters to breathe, and the full-length exhaust system features stainless headers and beautiful flowing Akrapovič titanium mufflers. Bodes is understandably thrilled with the bike and thanks to 72 HKG, the king-sized Kwaka makes a bold statement and soaring sound wherever it goes.