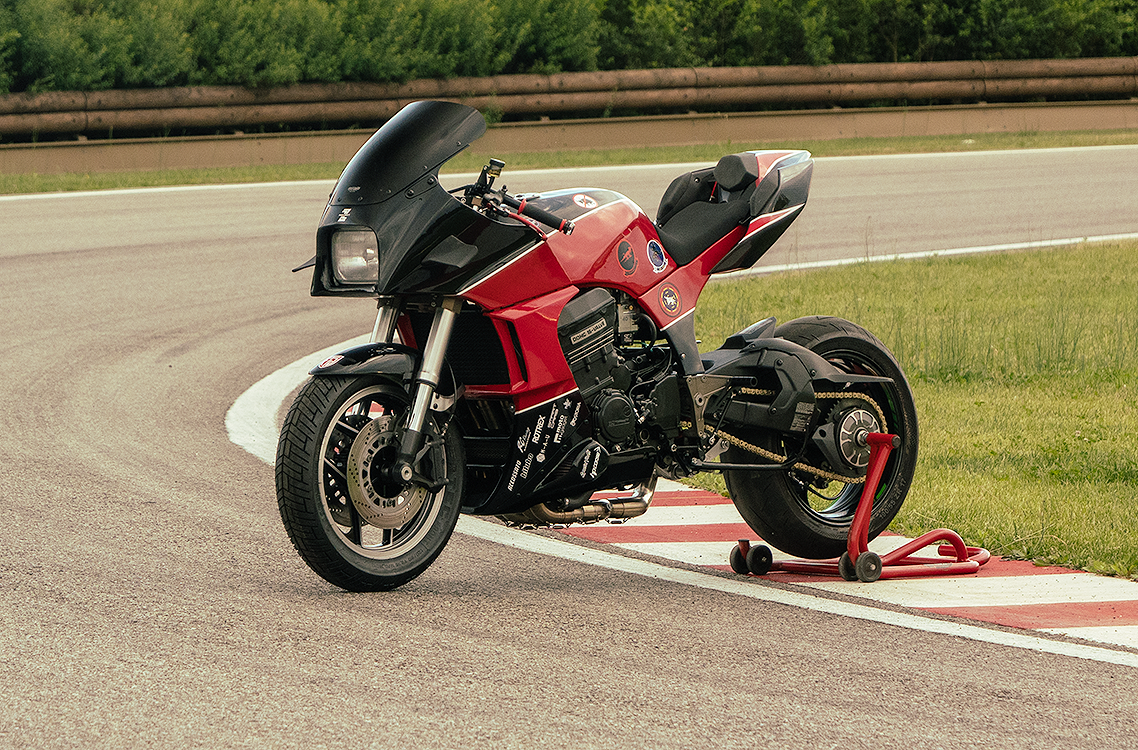 If only I could insert music into an article because if ever a motorcycle deserved a soundtrack, this is it! ‘Revvin’ up your engine, listen to her howlin’ roar, metal under tension, beggin’ you to touch and go, highway to the danger zone, ride into the danger zone’. If that song doesn’t get you pumped up for some Top Gun ’80s action, then you may just be dead inside! And with the recent release of the follow-up to the original blockbuster, Mr Cruise needed an all-new Kawasaki to ride and the radical H2R was of course the obvious choice to fill in for the original GPZ900R. So, to pay tribute to Maverick’s motorcycles, Milan’s FTG Moto have slammed old and new together, to create a supercharged hybrid to tickle any fly boys fancy.

Known simply as ‘Project Z’, the bike is the creation of brothers Filippo and Giacomo Tagliabue, who inspired by the initial trailer for the latest film, dreamed of a motorcycle that uniquely combined the past and the present. This however is no easy task, both machines were at the absolute cutting edge of technology when they were first released, but with decades between them, melding the two into one neat machine was going to be a challenge. So very early on the boys had to decide which part of each bike would make sense to use.

A 300bhp H2R with the back end of an ’80s sport bike would be a death trap, so that aspect of the build was sorted, it would simply have to be the other way around. And with the GPZ’s distinctive front end, which includes the strangely sized 16-in wheel, its silhouette would be the one to instantly transport people’s minds to the Top Gun franchise. Knowing they would need a host of custom parts to bring it all together, the guys did all the design work and then turned to MAU 3D to assist with prototyping and 3D printing, and Special Parts Italy to make the final pieces on their CNC machine.

But there was a single problem left to solve with this plan, the GPZ’s 108bhp might have been the shit way back when, but it’s simply not enough for a project that’s ultimate inspiration comes from machinery that can break the sound barrier with ease. The solution was right in front of them with the H2R, supercharger heaven, and forced induction would be the path to those extra ponies. A Rotrex Centrifugal supercharger compresses the air and is neatly mounted with a custom bracket and pulley setup. Of course, the stock quad carbs would be near impossible to tune under boost, so a clever Smart Carb gets the job of metering the right amount of fuel.

To help keep things cool and well lubricated, a custom oil tank helps to feed both the engine and blower, and all the pipework is neatly fabricated from stainless steel. The same material was used for the full exhaust system, which absolutely screams out of an HP Corse muffler. With all of that power now on tap, the suspension and brakes needed an overhaul and a set of big USD forks have been slotted into the older frame with custom clamps and bearings. With some clever engineering, the radial Brembo calipers that came with the forks work with the stock discs, and the 16-in rim is retained.

The rear end is, of course, a completely different story and you can’t just bolt a modern single-sided swingarm to an old bike. But brilliantly designed, the guys have incorporated a set of CNC machined centre plates that help tie the two eras together. That distinctive contrast cut wheel remains, and with good reason, the wide rubber is needed to get all of that power to the ground. Wanting to retain the tuneability of a linked suspension setup, the guys then worked with Bitubo to come up with the perfect rear shock to meet their needs.

Hovering over that back end, the H2R bodywork has been grafted onto the custom fabricated subframe and it creates a tasty amount of negative space over the tyre. Making the GPZ bodywork fit was a taller order, with both the supercharger piping and the custom air filter requiring neat cutouts to fit, that are then overlaid with new fibreglass for an incredibly slick finish. Even the front fairing has come in for some modification, with a set of winglets being perfect for the theme, and then it was off to Kustom Family to lay down the all-important paint and apply the movie matching stickers.

Project Z is also littered with a host of seriously cool custom touches, the air intake is 3D printed from carbon, there is a blow-off valve to release pressure when the throttle snaps closed and the switch blocks are incorporated into the brackets of the Brembo master cylinders. Accossato supplied the lines and levers in a paint matching anodised red, and most of the electrical components have been replaced by items from the Motogadget catalogue.

The brothers are rightly proud of their build, and now all they need to do is convince Mr Cruise to throw a leg over, apply the brake, build some boost and fire this crazy Kwaka down the runway!