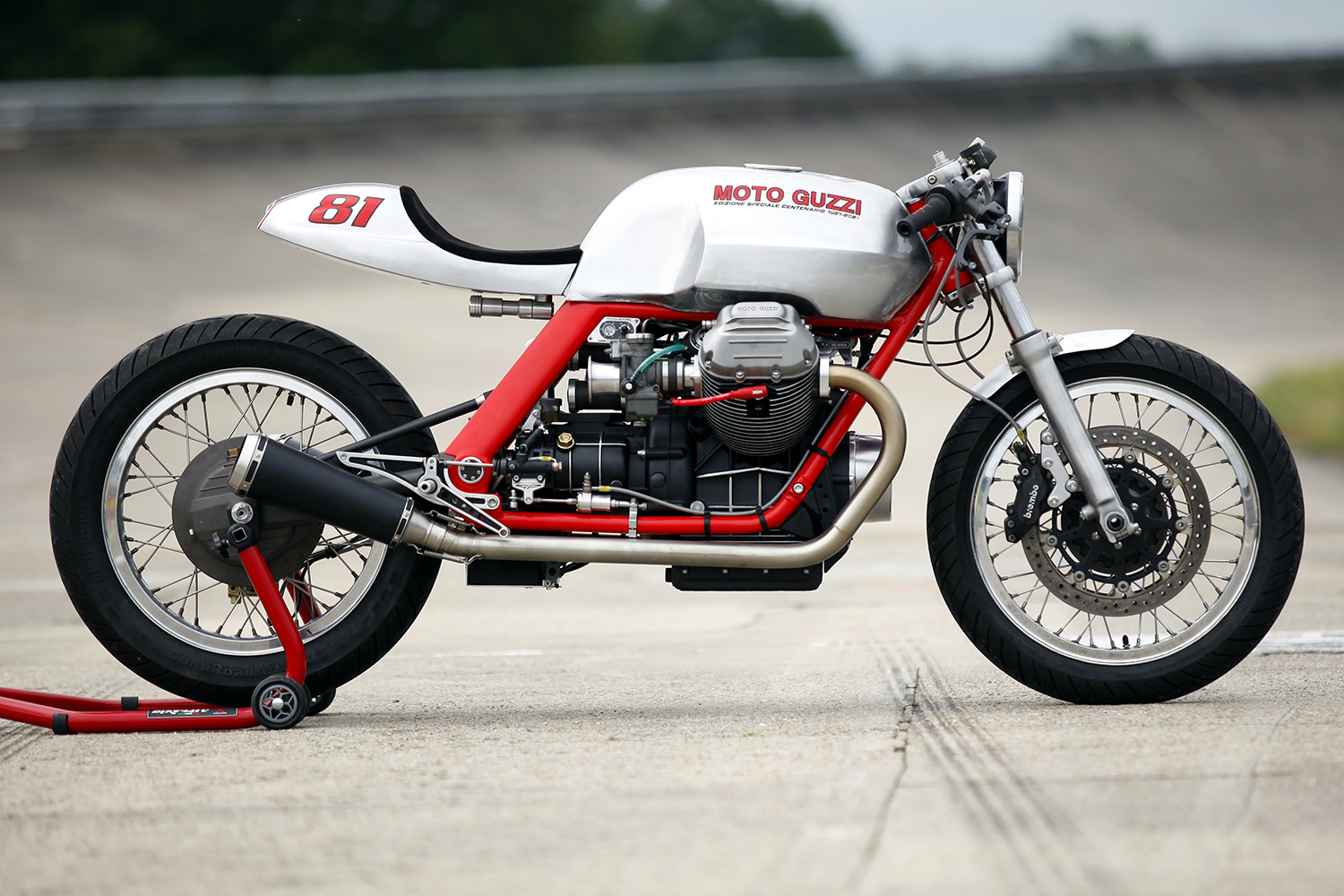 Some builders are so prolific that every few months you open your inbox to find they’ve sent through another stunning creation. Others, you don’t hear from for years and you wonder if perhaps they’ve left the game or life’s endless responsibilities have scuttled their creative endeavours. It had been more than four years since we last heard from Frenchman Nicolas Baux, but now we know why, he’s been keeping himself busy building one of the coolest custom creations of the year. From the bare bones of a Moto Guzzi 850 T3, the man behind Motocyclette Certifiée Non Conforme has left no stone unturned in crafting this incredible slice of Guzzi greatness.

Having successfully displayed his last build, a gorgeous Royal Enfield, Nicolas took a short break and then launched himself into the T3 project. The CAD designer by trade first started with a storyboard to build inspiration, cutting out images of everything from automotive marvels to athletes in full flight and detailed mechanical masterpieces. Then he had to find a donor bike and the one he got his hands on had seen better days and came with the full set of panniers, giant windshield and a host of other horrors.

But none of that would matter, as Nicolas would rebuild and build his Moto Guzzi to a level that few have attempted before. I say build, because many custom motorcycles are a new arrangement of original and aftermarket parts, whereas this motorcycle has so many handcrafted pieces built for purpose, I simply won’t be able to mention them all. Interestingly enough it was one of these small parts that was built first, the incredible machined velocity stacks that feature an internal filter that give them the look of mini jet engines.

One of the larger challenges however came in the form of the suspension, and with a mono-shock conversion in mind, Nicolas envisioned something he’d never seen on a Guzzi before. A pushrod system, the likes of which you would normally see in Formula 1. The front mounting plate sits off the back on special mounts on the frame, and the sand moulded piece even includes the name of the bike ‘La Macchina’ and the Moto Guzzi logo. The rear attaches to the factory mounting points of the twin shock setup, and connecting them is a special set of pushrods made from a mix of carbon fibre and aluminium tubes.

These parts aren’t just hit and hope either, with extensive engineering and computer validation used to ensure perfect operation. Which kind of explains the next move, most would then just grab a rear shock from superbike XYZ and call it a day. Not our friend from France; first he selected a very high-end Fournales shock, which combines high pressure air springs with hydraulic damping, hence why they’re known as ‘oleopneumatic’. Then, because they are designed to be used in a vertical setup and not the horizontal arrangement he created, the inside of the shock was rebuilt completely to suit.

There is barely time to mention the stunning machined top triple clamp, with its hand made steering nut, all holding together rebuilt front suspension. As I can’t talk about this build without paying attention to the incredible bodywork. With the frame modified in more ways than there are colours in the rainbow, the body starts as foam that is slowly shaped over the backbone. With the finished design looking picture-perfect, each part is hand formed in aluminium sheet. Incredible patience and time required to get every line spot on, without creasing the soft alloy or burning through a weld.

The big broad shoulders of the tank help to capture the presence of the thumping V-twin engine, while the slender rear appears to however over the back tyre, the internal support structure completely invisible to the eye. The paint and graphics are simply to die for, doing everything they can to accentuate the new lines, while taking nothing away from them by covering up all the parts you want to see. The recessed rear light and custom made front headlight are both handcrafted items that you simply have to feast your eyes on to appreciate.

That endless list of custom parts continues, with everything from new carb tops, to an incredible pair of rearsets, all painstakingly hand made for the project. On the LSL clip-on bars, Nicolas wasn’t going to compromise on the switchgear, even with some gorgeous stuff available from the aftermarket. So, from the CNC machined casings to the circuit boards and buttons, he made it all himself. The one-off set of stainless pipes are no different and they end with a pair of MCNC’s own mufflers, with the rear cone given the same design as the tail light and velocity stacks.

A coffee table book would be required to do this bike justice, but for now, simply feast your eyes on custom motorcycle perfection, welcome back Nicolas, we missed you!