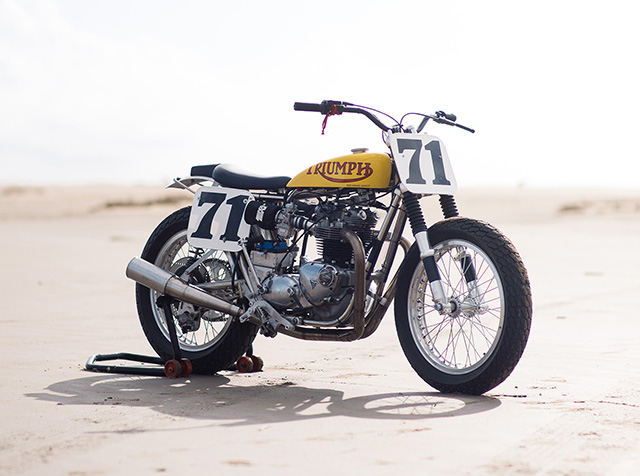 There are millions of people who ride motorcycles around the globe; most on small capacity machines to commute through big cities, others ride for fun, while an even smaller group makes use of them for their weekend sporting activities. But then there are those who are true bikers, they live and breathe their life on two wheels and you know it the moment you meet them. Christophe Canitrot is one such man, hailing from Toulouse, France, there is always at least one bike for riding and another in the works. Now preparing for an assault on the European flat tracks for 2020, he unveils his latest love, a Staracer framed Triumph that’s as dedicated to the sideways lifestyle as the owner himself. 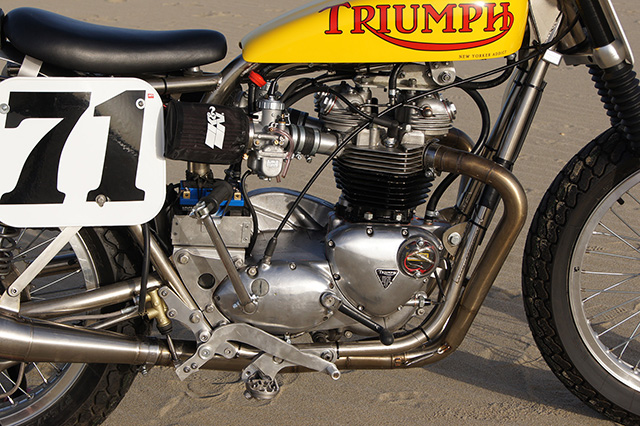 Not only a biker, Christophe ensures others enjoy his passion as much as he does and serves as the race director at the brilliant Wheels & Waves festival outside Biarritz. More than just a static show, the racing gets serious and as the competition hots up each year Christophe knew he needed a better weapon. “After 2 years on my first Flat Track build, a Triumph 500 Daytona with a stock frame, I knew it was time for me to jump to a new level.” But having located a Staracer frame in France, originally built by flat track master Roger Attebury in Kansas, acquiring it became another challenge. 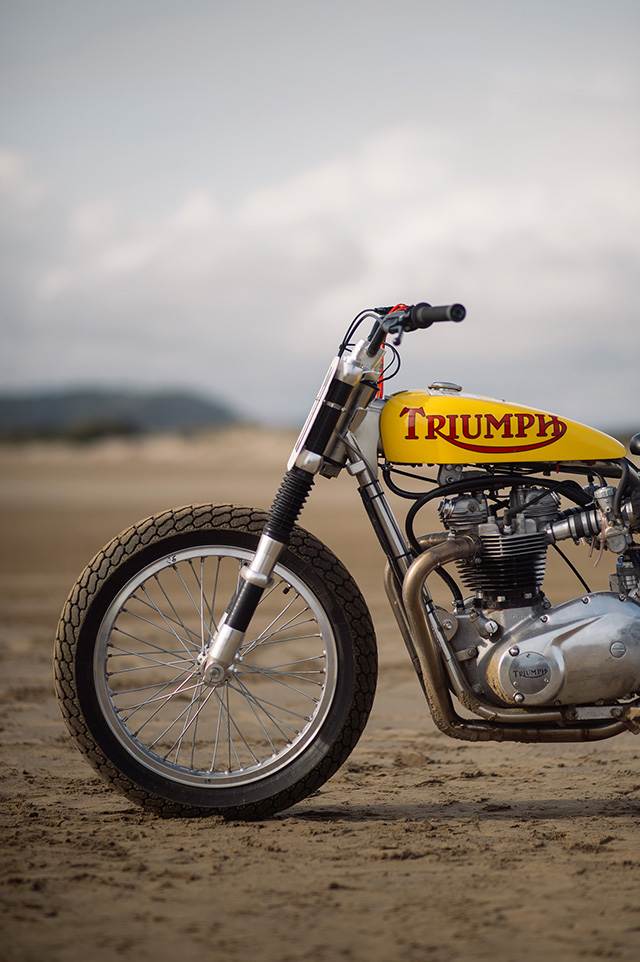 “It was completely new and waiting for somebody to take care of it. After almost 2 years of exchanges with the owner, we finally found a nice deal and since then the project started,” Christophe recalls. So with the dedicated racing chassis in his possession, complete with in-frame oil tank and geometry designed purely for sideways control, the decision on how to fit it out had to be made. At first the idea was to shove the Daytona 500 engine in, but with the frame designed for a 650, it was time to get on the internet. 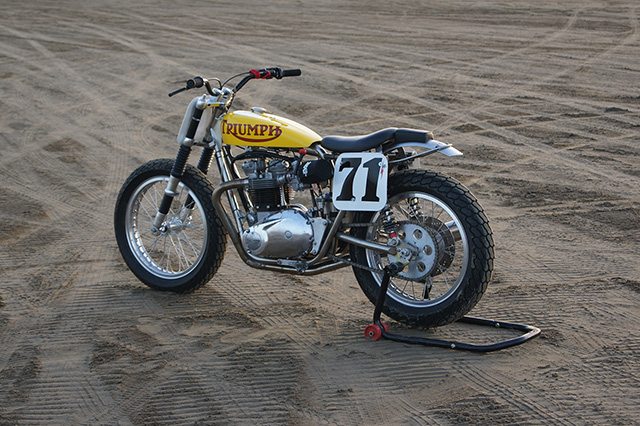 In the USA Christophe located a 1967 TR6R engine and frame and arranged for Legend Motor in France to take care of the job of importing it back across the Atlantic. After two months the motor had arrived at his door and more parts acquiring was on the cards, “In the meantime, I bought these beautiful Ceriani GP 38 reproduction forks at Atelier Chatokhine and stocked everything in my living room as a decoration for about a year until I got all the different pieces needed to start the project!” 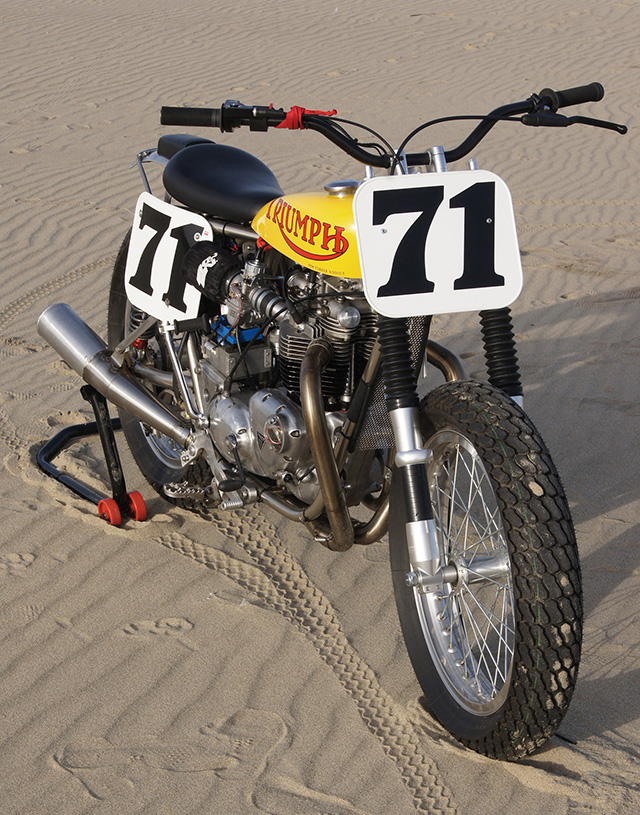 Turning to his trusty mechanic, who he calls “The Doctor”, Christophe handed over the engine to Philippe Fabre, who also takes care of his bikes during the race season. With the 650 engine stripped down it was built back up with a Morgo 750cc big bore kit that comes with new barrels, pistons, and gaskets. Then the doctor stirred in his own batch of special parts, bolting in a lightened crank, a new set of rods for a stronger and lighter bottom end and the top end benefits from a head overhaul with new valves and springs controlled by a 750 cam. 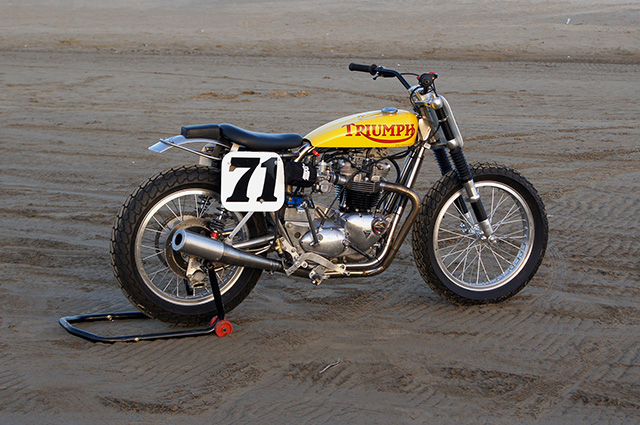 The outside of the engine is just as bitchin as the internals and making sure the spark never falters, the Tri-Spark electronic ignition setup is visible through the clear side cover. Fuelling is Japanese, giving the bike a truly global appeal, with a set of Mikuni carbs fitted out with K&N filters and PreCharger filter wraps to take care of the dust and dirt. The long intake runners were selected for better torque as Christophe had been frustrated by slow starts in the past and the stunning exhaust is the work of Cristoffer Martensson in Barcelona. 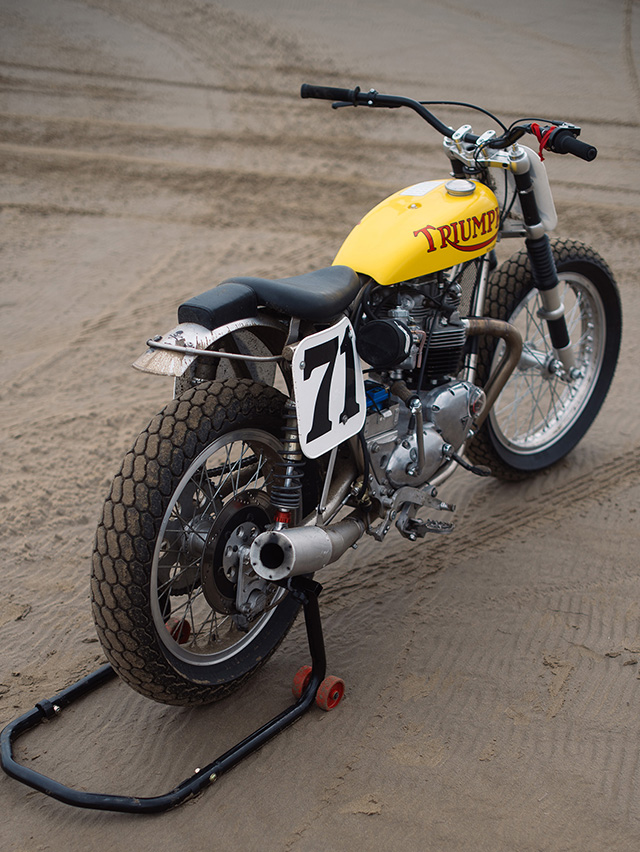 But going fast is only part of the battle and wanting the bike to look good Christophe took a trip down memory lane. “I sold a BSA B50 MX a year before that and I was missing the yellow tank so much that EL GUAPO here in Toulouse did this paint job. The seat and the back pad were made by Skinass Custom, also in my hometown,” and the Triumph was beginning to look like a full-blown racer. A custom rear fender catches the worst of the spray and the #71 number boards complete the task. 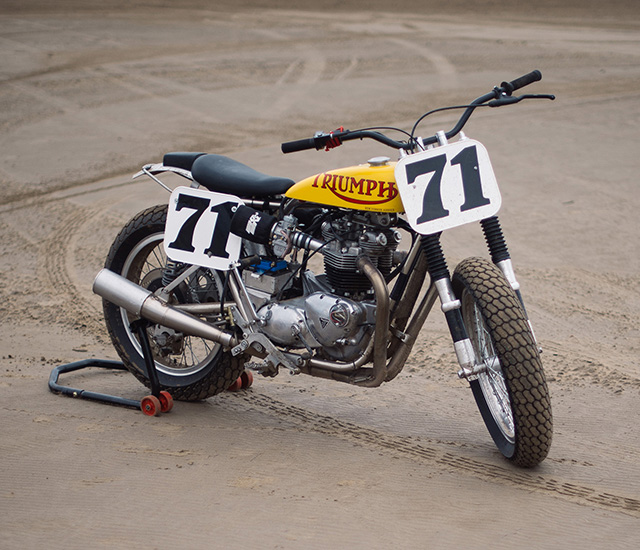 A new set of lightweight rims has been laced up with stainless spokes and custom hubs get the whole thing rolling. The Ceriani forks slot into the frame with all new bearings and the wide bars with no front brake prove it’s all for purpose. But there is some slowing down capacity and the new rearsets operate a Brembo master cylinder and underslung caliper for the rear. “Since then I’ve only ridden 10km to try it and to adjust some stuff to make sure everything is working well,” Christophe reports. But with the Triumph engine barking out plenty of power and the brilliant Staracer frame suited to his style the man himself knows the task ahead “I’m ready for the European Championship and to try to do better than last year.” Always the biker, desperate for man and machine to go one better! 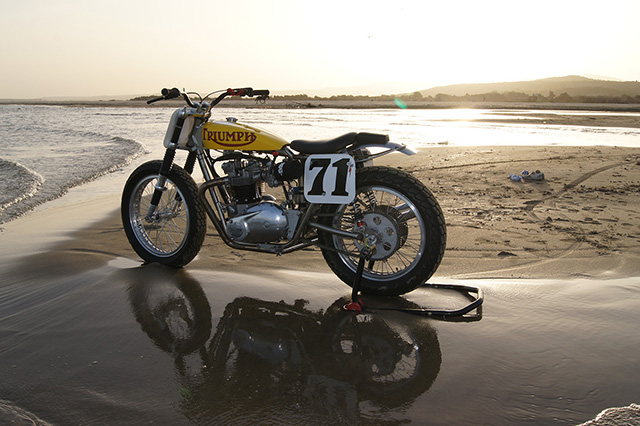