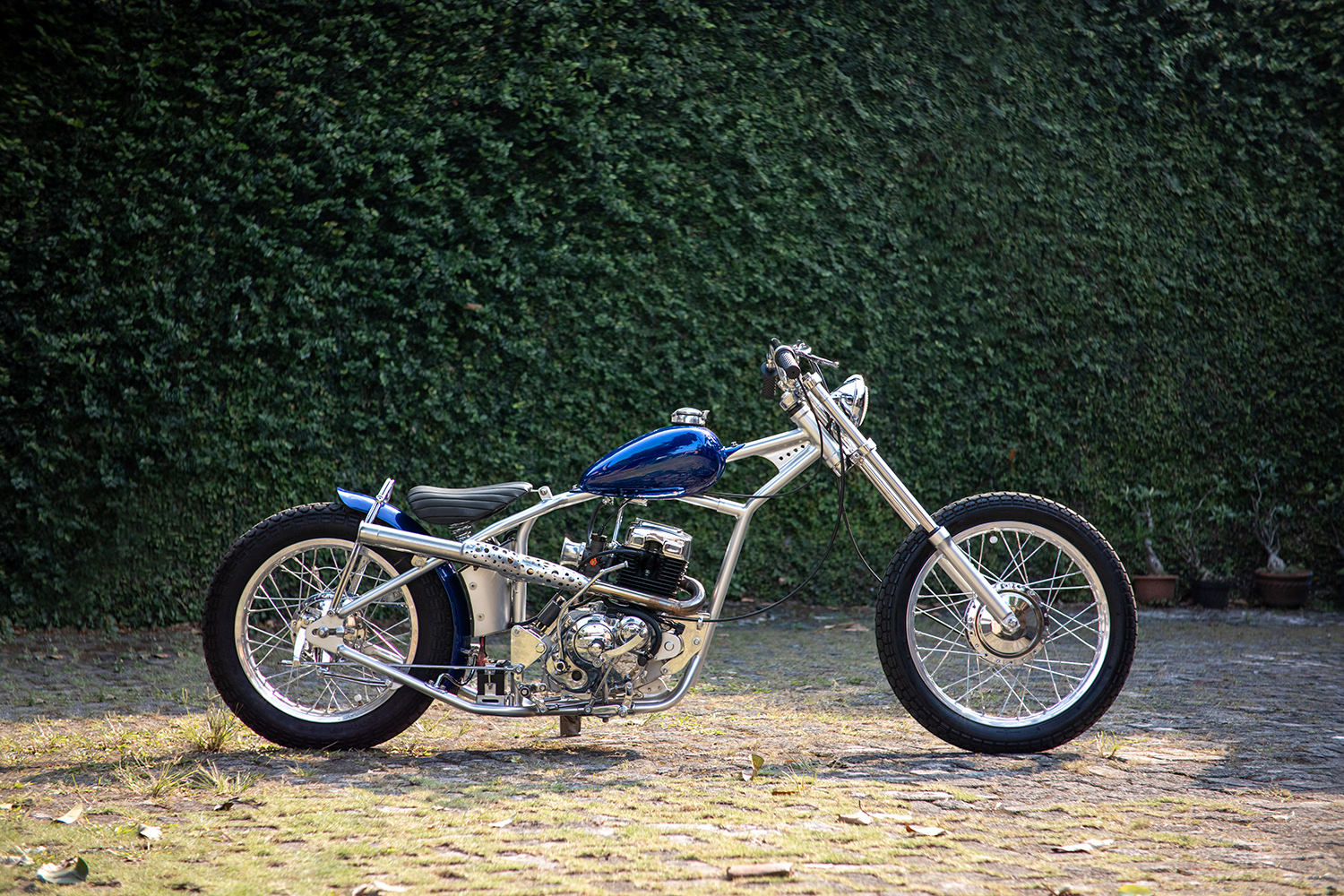 The massive capital city of Indonesia, Jakarta, is home to more than ten million people and according to the minister of transport, only 18% of them use public transport. That’s because in the sprawling metropolis they are bike crazy and with over fifteen million motorcycles registered for the road, two-wheels keep the city moving. So, it should come as no surprise that amongst these are some pretty crazy customs, and churning them out like clockwork is the talented team at Batakastem Workshop. Their latest creation is this stunning chopper that started life as a Suzuki Thunder 125 but now simply goes by the name ‘Sondang’.

Headed up by Abraham Simatupang, a talented designer, the team at Batakastem in the southern part of the city turn out a host of custom builds in just about every style imaginable. But as we’ve featured over recent years, to truly stand out in the custom crowd in Indonesia you have to get wild and there would be no holding back on this build. A popular bike in the country, the Suzuki Thunder 125 is a bare-bones commuter machine that is made locally under license.

Plenty of the little Zuk’s have been turned into cafe racers and scramblers, but few have gone as far as crafting a full-on chopper. To begin the process the bare frame was measured up and then the grinder spun into life with both the entire back end cut back from the centre post and the neck completely chopped off. Once a basic twin shock setup, the rear end has been rebuilt with an all-new custom rigid tail, that both lowers and lengthens the stock dimensions.

The front end was more complex, a “Gooseneck” conversion has likely never been performed on a Thunder, so plenty of careful measuring and calculations had to be performed to ensure the geometry would be just right. With the new metal bent up, the headstock is extended out and welded to give extra rake, while a drilled gusset is installed to give increased strength. Finally, the choppered frame was hit with a coat of silver paint and the team had their chassis.

To make the front suspension work on the radically altered beast, the stock triple clamps would never do and a beefy custom set was machined up to handle that rake. Made in a very narrow design, they clamp a rebuilt and extended set of factory Thunder forks. Mounted at the other end of the forks on a custom axle is the all-new hub built just for the bike. A special bit of kit, the hub was designed to incorporate both a full drum brake setup, as well as to accept spokes to do away with the factory mag wheels.

The aluminium hub is laced to an all-new 19-inch alloy rim with stainless steel spokes, with the process repeated at the rear with a 17-inch rim used. Each new wheel was polished within an inch of its life and then wrapped up in Swallow classic SB212 tyres that give the perfect vibe. Now rolling, the boys turned their attention to the bodywork and a custom peanut tank in a size to match the proportions of the rest of the build is the perfect addition. The hand-rolled rear fender continues the old school chopper feel and that’s only enhanced further with a handmade twin loop sissy bar.

The engine on any bike with such minimal bodywork is always going to take centre stage and I’m guessing only diehard Thunder fans have noticed the radical change. Using their genius, the team took the bottom end of the 125cc powerplant and then adapted a four-valve head from a Hyosung to fit. To match the extra breathing capacity of the engine a new TK Racing PE-28 carb was then fitted with a machined velocity stack. The exhaust is a single hand bent stainless pipe, with custom muffler and heat shield to finish.

With the tins off to be sprayed in that absolutely stunning Royal Blue, a bunch of other parts were sent out for chrome, including the one-off bars that incorporate the risers into the narrow design. A traditionally stitched black leather bobber seat sits over a faux oil tank that houses all of the wiring and keeps things looking ultra-clean.

Before, finally, all the finishing touches were added in the final assembly, like the trick vintage headlight, custom foot controls and Biltwell grips. In hitting the Jakarta streets, ‘Sondang’ joins millions of others, but there is simply nothing else like it and Batakastem Workshop’s reputation only continues to grow.