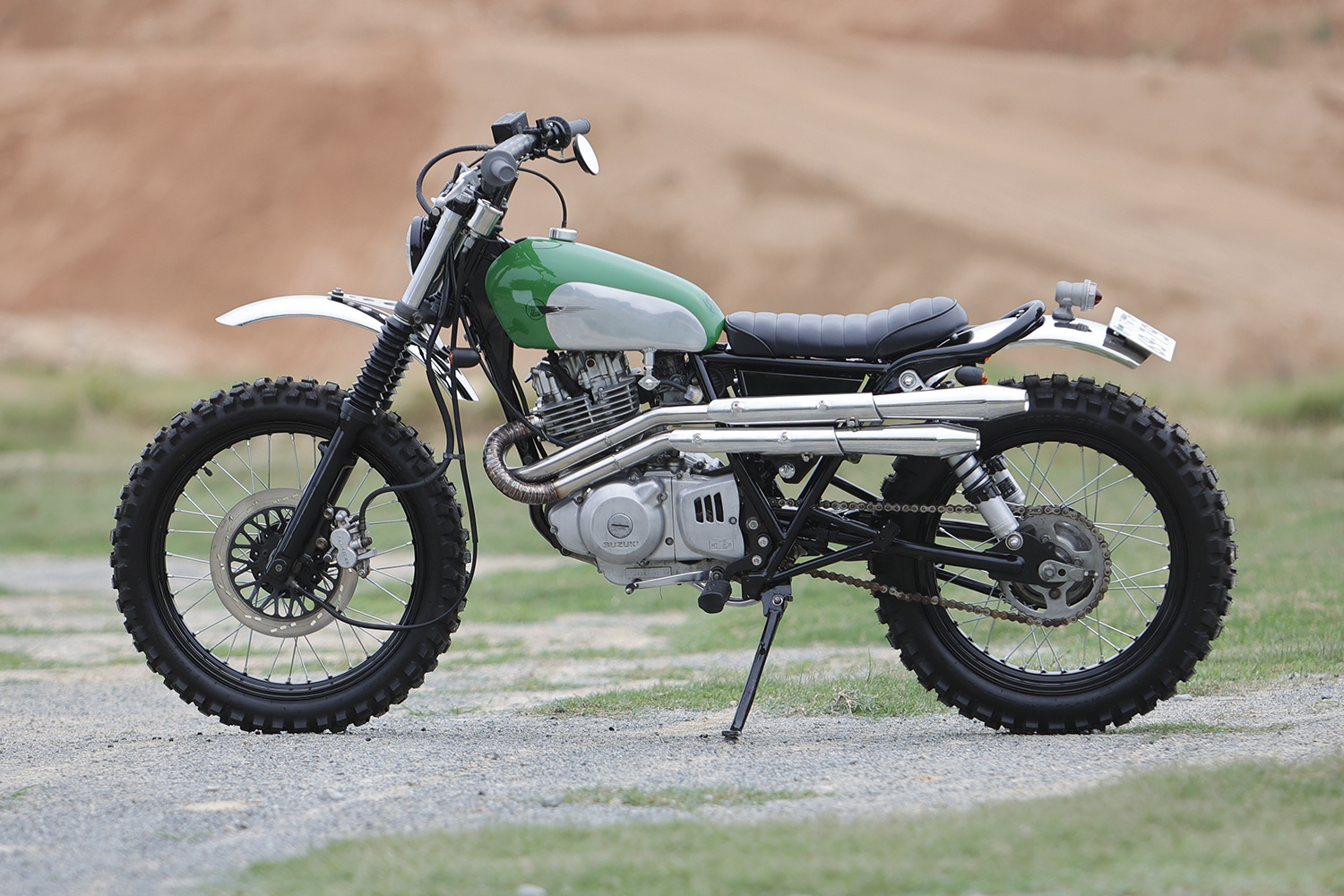 What’s in a name? A lot apparently, and when it comes to giving a vehicle a moniker, the big auto companies seem to believe that different markets need different names. And well, it doesn’t always go to plan; the Mitsubishi Pajero famously needed a name change for many markets as the Spanish meaning of the word is self-gratification, oops! And the JDM Isuzu Big Horn was badged with the much tamer title Trooper for the international market. Here in Australia the donor bike for this Heiwa build is the Suzuki TU250G – about as inspiring as burnt toast. But in many other markets it’s known as the Grass Tracker, and instantly I’m interested. Now transformed by Kimura-san into the Grass Tracker No. 007 at his Hiroshima workshop, it’s a Scrambler absolutely everyone can desire.

With a background in motocross himself, what initially drew Kimura-san to the little Suzuki was the fact that the 250cc engine has its architecture based on the DR250S of old. From 1981 to 1991 it was an all-round MX/Trail bike that was known for its almost unbreakable traits and decent power. Then you add to the fact that the purchase price of even a brand new Grass Tracker is a bargain, and it makes perfect sense as to why Kimura-san decided to base an entire build series around the model.

But each build in the series is tailored to the client’s needs, “The design concept is a cool design even on the streets where you can run in the mountains,” the master builder tells us. So, with a donor bike rolled into the shop, the awful little round fuel tank was torn off, the plastic side covers thrown away and the Suzuki stripped down to a bare frame. With the motor out the carb is rebuilt and a power filter fitted, and then a stunning set of stainless headers run back to chromed-out high pipes.

Then the grinder is spun into action and everything above and behind the rear shock mounts is cut off. In its place goes an ultra-neat hooped rear that has a nice up-kick to provide a high mount for the fender. Before new black paint is laid down onto the chassis, the welds around the shock mounts are improved and beefed up and the new fab work is all smoothed out. Should the owner want to ride two-up, the rear peg mounts have been retained, and it’s not a bad thing given that the gusset helping to hold them on also provides extra rigidity to the swingarm pivot point. A lesson from Kimura-san that simply hacking everything off, is not always wise.

Time for the bodywork and this is where the little Suzuki gets a big change and goes from a little learner bike, to a lean, mean, British Scrambler inspired machine. The fenders are straight from the ’60s aesthetic and having been hand rolled in-house, they are then chromed for a little bling and bolted to the frame with custom mounts front and rear. The high-rise mount at the front end is all alloy, and with its punched speed holes makes a statement of its own. Part of that rear mounting system cleverly supports the back of the seat, with the base topped in a thin layer of foam and wrapped in quality leather.

“Generally, in a scrambler, I put on a number and thicker seat, but since the scrambler I make emphasises city riding, I do not dare to make it a general scrambler atmosphere,” Kengo-san explains, so fear not for the rider’s rear. It’s the fuel tank however that steals the show, with more of that old-school inspiration brought to life by the genius fabricators’ bare hands. The hand-rolled aluminium is neatly shaped to suit both the backbone of the bike and also creates the right look, with the bare welds deliberately left on show.

With the TIG welder still in hand, the space below the seat now benefits from an absolutely beautifully crafted oil tank, that actually serves in practice as a secondary fuel reserve. This is left in raw alloy, while on the other side of the bike, a black painted box hides the ignition and other electrics. Out with the spray gun, and the only colour on the Suzuki is the period-correct green that also features a set of Heiwa logos and a very cool 007 graphic at the rear. All of this combined with the small Bates style headlight and the vintage Heiwa taillight combines to create a machine that’s got the look to really live up to the name.

The front suspension actually isn’t bad from stock, and having been improved, painted, and dressed in gaiters it’s ready to roll. The rear end however is shocking off the factory floor, so slightly longer and vastly superior shocks in the form of fully adjustable units from Kayaba get the call up. New rims go up in size, with the blacked out hoops measuring 19in at the pointy end and 18in down back, all wrapped up in Dunlop’s D603 tire.

The controls are kept simple, MX bars with a custom pad, an offset speedo, and a single mirror to observe who is getting lost in your dust. The name really does say it all, a Heiwa Grass Tracker 007, delivering exactly on what the label promises, and not a single James Bond pun along the way.