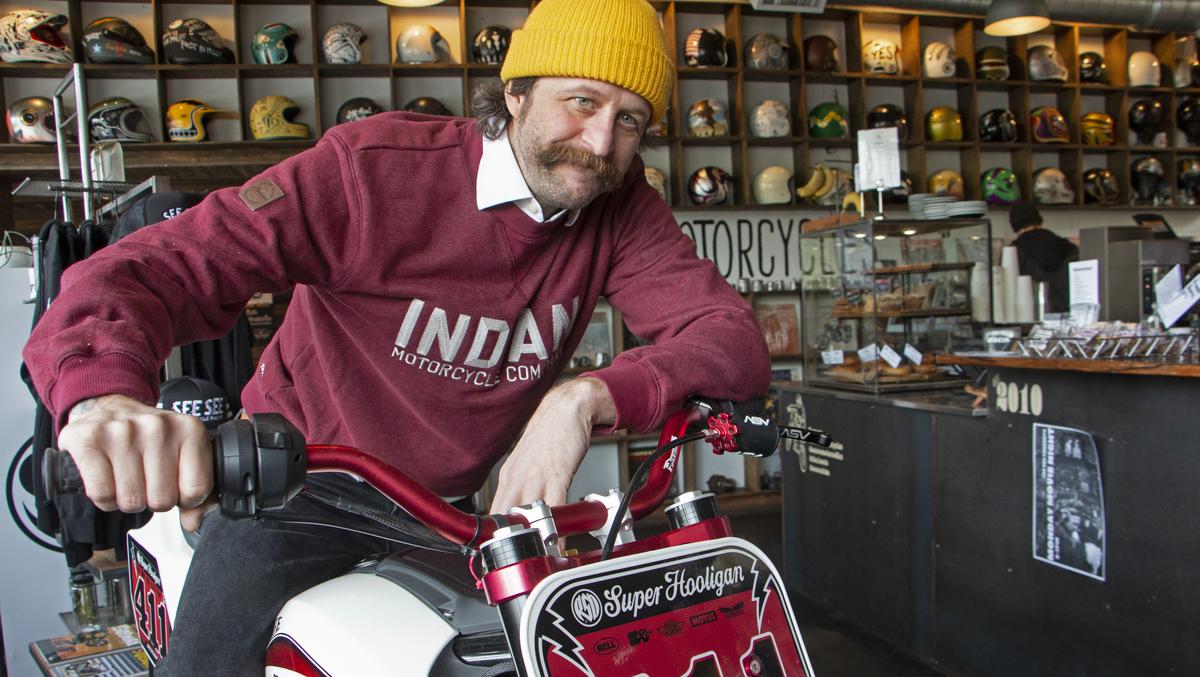 We caught up with the moustached man behind Portland’s See See Motorcycles and The One Motorcycle Show. Thor grew up secretly kicking dirt bikes over in the desert and riding snowboards in the mountains. After a brief stint in the advertising industry, he quickly found out he was better suited to working for himself – and with motorcycles. We asked him some questions about his love of motorcycles and how he finds the time to run so many businesses and events while keeping a big grin on his face.

Can you introduce yourself to our readers?
Greetings earth people, it’s me again, the moustached goofball from the Pacific Northwest region. I love motorcycles, motorbikes, cycles, etc…

Is Thor Drake your real name?
Thor-ific Drake, yeah, my Norwegian grandpa gave me the Thor part and my dad gave me the Drake part. Drake in Norwegian is loosely Dragon, which sounds pretty tough. I’m not that tough but I am really stubborn so I guess in a roundabout way, keep up with the toughness.

You must be one of the hardest working guys in the moto industry. How the hell do you manage to run so many businesses and events?
This is ADHD at work. I never treated it as a kid and eventually it started working for me. haha. No, I just always keep moving. My trick is to cycle through everything all day. Chip away a project until they see the light of day. Do that over a lifetime and eventually you start to snowball. Not everything is a success but lots of stuff happening all the time. You partner that with a great team and clear goals. Make the most of every day.

‘Love what you do and you’ll never work a day in your life’. Think that’s true?
If you love to work that’s true, otherwise it’s all misery until its success. Lots of people say “you are lucky” or “it must be fun” none of those things rings a bell, but I do love to work and i love the rewards of hard work, so there you have it.

You’ve managed to hold the One Motorcycle Show in Portland during these tough times. Was that challenging? Did you almost have to cancel it?
I cancelled it 10 times in my head before I roped my team into it. For me, it was more my responsibility to do it than it was not to do it. We gotta be brave if we want to make it into the future. Part of that is using common sense which will help inspire courage, don’t listen to people trying to tell you what to do without questioning motives. We worked well within our safety requirements. The state of Oregon went into “Extreme conditions” the day the show started, we kept our process and did not break rank. We had so many meetings about what if’s i think we over prepared. It was in the words of the Portland fire marshal “a win for the good guys” at the end of the day…. I was extra inspired because I got kids to feed.

You’ve been holding the One Show for 12 years. Would you have ever thought the show would still be going and be such a huge event so many years later?
No way! I’m not one to do anything for more than 10 years, but who am I to tell me what to do? One of life’s great surprises is letting yourself change into someone you want to be.

What were some of your favorite bikes at the show this year?
I’m partial to the Minibikes, choppers, and superbikes. We had over 200 custom bikes and everyone had something interesting about it. The cool thing to see is custom bikes have gotten so much better since we started. I don’t know if i had favorites, but there were some really cool bikes. This year I spent a lot of time after folks left going over all the details. I was the first one and last one there everyday.

We’re seeing more and more adventure bikes being built. What trends do you see in the future of custom bikes?
Yeah definitely adventure bikes. It’s fun to ride off road, slightly safer because no cars, and more accessible to people. I think Mini-bikes are going to be a trend for a little bit.

What bikes have you got in your shed/garage?
Gosh I have them everywhere. In my van, garage, shed all over my shop in storage, in the cafe’s, I love motorcycles! Some upcoming projects, doing a Royal Enfield Meteor, and I have my first bike, a SR500 with a bunch of cool vintage race parts. Someday I’ll revive that one. The meteor project is going to be cool, I’m going to customise it and paint it all white, then send it out to artists to paint on and ride. It’s like a group art show on one motorcycle.

Are you building any See See custom bikes at the moment?
Today, I’m fixing the HD “Teal Steel” tracker. It needs new tires and a few other things. Lots of bikes to build, not enough time to build em. But I’ll just keep chipping away at it along with other things. Also, I’m finally building all the trophies for the One Show, I just love to build.

Have you got a favorite?
I have a favorite for every mood. I am partial to the 500 single for some reason. I also compare all bikes to 500 singles so that must be my favorite.

Dream bike if money wasn’t an option?
I have been dreaming a lot about a new ktm/gasgas/husqy 350sx. I want a proper modern mx bike, but just to ride. Also a cool old HD chopper would be fun. I have a 74 original electroglide but its purple and uncool, so having something to offset that would be neat.

Is there one bike you wished you never sold?
The HD “Indian Giver” Street 750 – that bike won so many flat track races. it was the bike that always could but never should. It was magical.

What’s your fondest memory on a motorcycle?
Riding across the country on a 74 RD350. It was my first time cross-country, almost 4000 miles, and somehow I coaxed a piece of shit RD350 that I “cafed” all the way to Knoxville. That trip taught me a lot about life expectations. set the sights low and enter with an open mind. the rest will work itself out. Also I learned, you only meet great people when you break down – the jerks just keep on going.

What’s your thoughts on the future of electric bikes?
Can we put a clutch on already? I love them but we need to add a clutch, why? Well you see, it deactivates the main drive as a redundant safety measure? Also it’s fun to work the clutch, also it’s like an opposable thumb and humans. It’s what separates motorcycles from scooters etc… I really love electric bikes but we just need to make them more motorcycle user friendly and not idiot friendly. It’s hard to ride motorcycles… that’s what makes them fun.

Have you ever had a serious crash?
Non-stop, the last one almost ripped my arm off. Took one straight to the shoulder now it sits 2 inches lower. A bunch of head injuries. a couple road crashes. shit loads of moto cross ragdolls, a few high sides on flat track, a few low sides on enduro. If you don’t crash you don’t learn.

What’s next for See See, Thor and the One Moto Show?
We are trying to open more See See locations, maybe Arizona? I want to ride more but with two babies that will have to wait. Same with building personal motorcycles… the show… awe, yes the mighty One Moto show. I re-fell in love with it this year. It’s just such a great space to bring people together, not only that, it’s a certain type of person, usually a really genuine and nice type of person. Meeting those interesting types of people is the reason I love motorcycles in the first place. Plus it gives me a reason and deadline to build a new bike each year. I’ve done 12, solid builds so far. Lately, I have done 2-3 bikes a year so the real number is around 16 or so, I lost count.
I just love motorcycles!