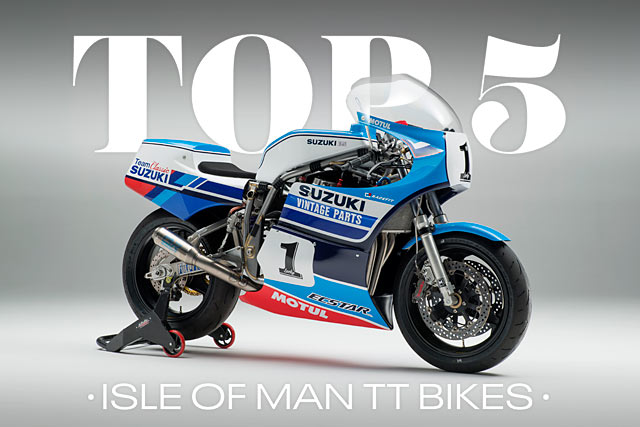 Since 1907 man and machine have boarded countless ferries to cross the Irish Sea and compete at the legendary Isle of Man TT; at the beginning of each European summer. It’s no place for the faint of heart, over 260 professional and amateurs alike have lost their lives doing battle on the Snaefell Mountain Course. But in more than a hundred years of racing only World Wars have put a stop to what commentator Murray Walker calls “the greatest motorsport event of any kind.” With the action set to commence again today, Pipeburn delivers you five of the most important racing machines ever to take on the mountain. It wouldn’t be a proper list without the Manx Norton, taking its name from the language and people of the Isle of Man. The bikes run spanned over decades but the basic architecture remained the same and was the weapon of choice for two of the races greatest ever riders. The great Geoff Duke won the Senior TT in 1950 aboard the long stroke version of the 499cc air-cooled single. Mounted inside the rails of the famous McCandless brothers ‘Featherbed Frame’ the Norton, especially designed to win on the island, had the handling required for such a fast circuit. But as the years wore on the engine was struggling for power, a switch to a short stroke configuration and with Mike “The Bike” Hailwood aboard a win in 1961 broke a string of wins for Italian manufacturers. Having won the first ever event and named their bike in the races honour, the win by the British manufacturer gave the UK the feeling they’d won ‘their’ race back from the continental invaders of MV Agusta and Gilera. But the joy would not last, British riders continued to lift trophies but a Continental manufacturer had found a winning formula and when finally combined with an Italian rider, they proved unstoppable. The partnership formed between racing genius Giacomo Agostini and MV Agusta was quite simply magical and aboard their glorious 500cc triple they dominated the mountain course. In the factory colours the machine was simply stunning and old Manxmen will tell you it’s the greatest sound they’ve ever heard. Designed to knock Honda from their perch in all forms of GP racing the high compression engine could push Ago over 260km/h with Ceriani forks and that stunning four shoe front drum brake to take care of the rest. In 1968 it delivered him the first of five consecutive TT wins.  But when his great friend Gilberto Parlotti died during the ’72 race, Agostini and a bunch of top line riders slowly began to boycott the event and ultimately saw it pulled from the GP calendar. Just like Ago, Mike Hailwood had enjoyed great success on the MV as well as with Honda, but while Ago was dominating on two wheels ‘The Bike’ had tried his hand at four, including stints in F1. But after eleven years away the call of the mountain had become too strong and in 1978 and considered old at 38 he made his racing return. Most experts believed he’d be uncompetitive, Hailwood himself was there for the joy, but the fans threw their weight behind him and once again he’d cause a sensation. Aboard a Ducati 900SS provided by a Manchester based dealer, he used practice week to set the bike up to be stable and hold a perfect line through the endless fast bends.

[superquote]“When it was over he didn’t believe he’d won, but the comeback race is one of the most famous of all.”[/superquote]

Come the Formula One TT his bike handling ability was on full display, seeming to be on a Sunday ride, braking early, he nonetheless chipped away. The constant pressure took its toll on his rivals, the crowd erupting each time the radio announcer called his name. When it was over he didn’t believe he’d won, but the comeback race is one of the most famous of all and the replica Hailwood Ducati’s would be sold around the world, as real bikes, models, posters and now as a modern homage. The win for Hailwood was part of a pattern of big capacity four strokes dominating proceedings that continues to this day and Suzuki didn’t want to be left out of the fight. Like other Japanese marques their success had relied heavily on 2-strokes but unlike short tracks it was with diminishing results. Enter the legend that is Pops Yoshimura; he came to Suzuki with an offer, back his efforts and in return he’d teach them the art of building a high revving four, leaving Suzuki Racing free to focus on the different GP machines. The result was the incredible Suzuki XR69, a 1000cc, four cylinder punching out over 134bhp and capable of 280km/h down Sulby straight. It provided the perfect weapon for the likes of McElnea, Crosby and Grant to have great success at the TT, elevated the Yoshimura name globally and continues to be a favourite at the Classic TT in the hands of road racing Royalty Michael Dunlop.

It’s the second Norton on the list but with the marque having claimed 30 Senior TT trophies that should come as no surprise. But the Norton 588 is unlike almost any other, using a liquid cooled rotary engine inside a Harris twin spar frame. Despite having been developed on a shoestring budget, with Norton barely an operating concern at the time, the unusual combination would win arguably the greatest race in the events 100 year history. In 1992 Scotsman Steve Hislop came to the island with the Norton run by his own team; major sponsor John Player had pulled out believing the bike to be uncompetitive. Starting down in position 19 ‘Hizzy’ would resume his rivalry with Superbike legend Carl Fogarty aboard a works Yamaha. Over 6 laps the pair traded record sectors, Hislop with the lead going into the last, and despite a record setting final lap for Fogarty that would stand for 7 years the victory was Hislop’s and gave the Rotary Norton a famous win for the unusual underdog.

There are many more racers that could be included, machines used by the legendary Joey Dunlop, John McGuinness and not to mention the three wheeled sidecars that have been a staple of the event. In 2018 every rider with even a remote chance of winning the Senior TT will pilot a four stroke, four cylinder, water cooled machine and they just about all look the same. But the bikes of yesteryear provided something completely different and remain popular attractions whenever they’re still seen. Five bikes that have come to represent the most uncompromising and yet beloved two weeks of speed available on the planet; and they do it all on public roads between the brick fences!