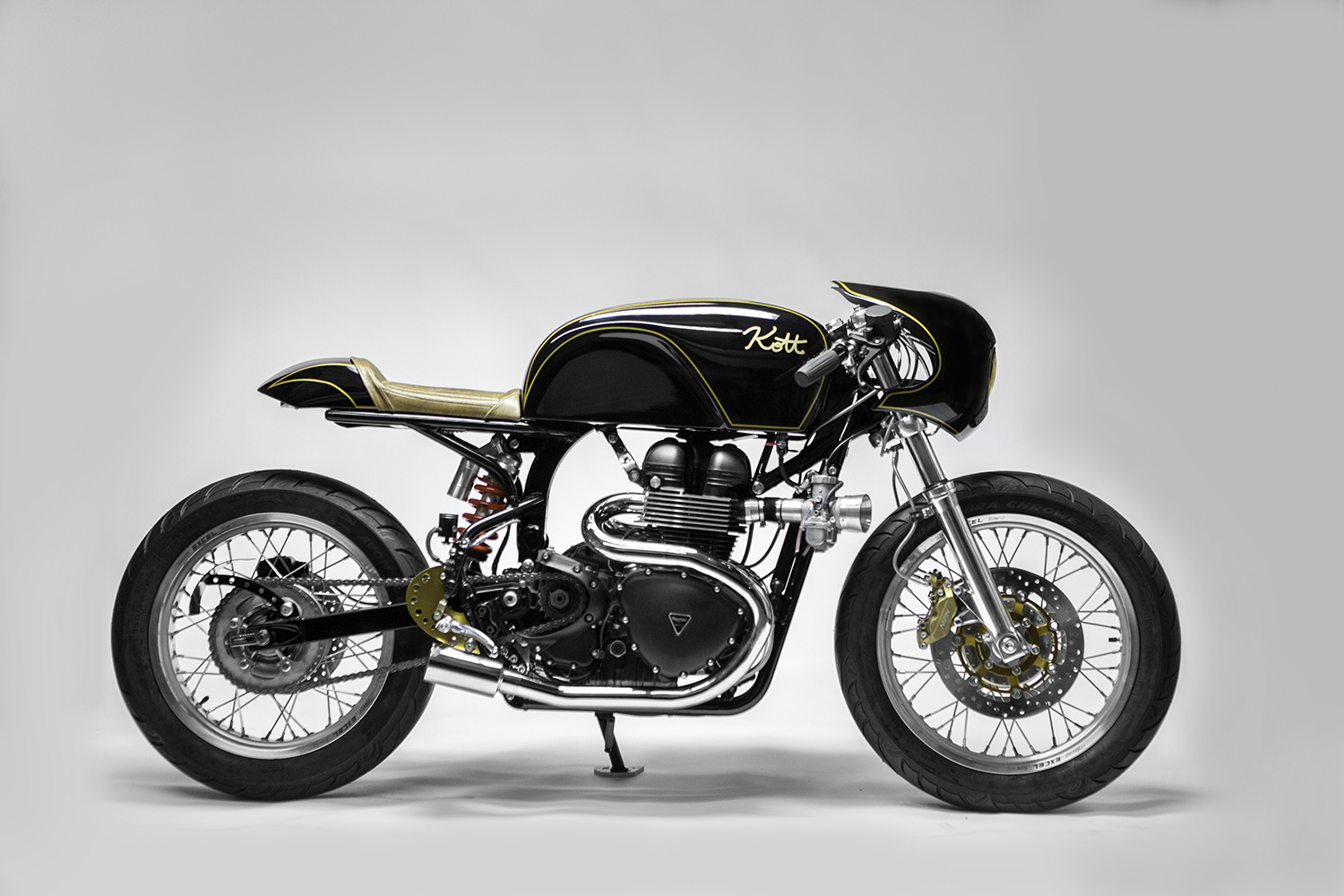 The use of ‘ram air’ intake designs, either for increased airflow into the engine or for cooling, has been around the motorcycle world for decades. How much of an improvement it makes has always been hotly debated and is determined by so many factors that we’d need to dedicate an entire article to the issue.

But it was enough of a thought provoker for some at Triumph, that they literally flipped their head. Needing someone to make the rest a reality they turned to one of the best builders in the game, California’s Dustin Kott, and once again he’s engineered and handcrafted another spectacular build.

The bike itself is not of any one particular Triumph model, there is some ’06 Speedmaster, metal from an ’07 Thruxton, and a whole host of other parts that have been built to bring this Frankenstein cafe racer to life. “The project was brought to me in two separate bins of what was left of an ‘06 Speedmaster model and I started slowly sifting through the parts to find some inspiration and direction. As with most extracurricular projects, I stalled out and let the project sit for years. Having picked up some new metal shaping tools recently, I’d decided to make an aluminum fuel tank that could possibly work for this shelved project, I’d found my motivation.”

Those original bins of parts had come from Triumph’s special projects team, where Todd Wilson had seen Dustin’s work on the likes of the bike he’d built for movie star Ryan Reynolds and believed Dustin was the man to finish what he’d started. Which was taking the cylinder head off of an air-cooled Triumph engine and with Bill Miko, flipping it around to create a forced air induction style setup. But that would prove to be the easy part, with Dustin then having to craft the motorcycle in which the engine would be installed and more importantly, get it all to work.

He started by picking up a 2007 Thruxton frame, the perfect basis for a high-end Triumph cafe racer. “To narrow the seat frame rails I made a new subframe which then prompted the idea for a different suspension approach.” To make it all work the centre post of the new frame and the swingarm were modified to suit a monoshock setup, and slotted into place is a unit to control it all from a Yamaha R6. With that done the front end could never stay stock, so a set of Honda F4i forks were sourced and they fit up with parts from Cognito Moto, “Their custom-made triple clamps and ready made bearing and race kits make the use of any front end possible on any frame.

To get the bike rolling, the front and rear hubs have been laced up with stainless spokes to accept Excel rims, which are in turn wrapped in fittingly British rubber from Avon. Braking performance doesn’t miss out, with the rear utilising a drilled disc clamped by a twin piston caliper. But it’s the front end that steals the show and stops the party hard when required, large twin discs are matched with a set of gold Nissin calipers and braided lines are used throughout.

“Once the chassis was established it was on to getting this machine to run. An irrecoverable amount of time was spent designing the new intake system in order to facilitate twin 36mm Mikuni carbs,” Dustin explains. To get those carbs sitting the way he wanted, a set of machined aluminium mounts was turned out, along with a set of velocity stacks for the intake side of the Mikuni’s. A host of other bits and pieces were required, along with some of the world’s shortest throttle cables and then Dustin had to fix the oiling system. As he tells it, a few mistakes and $1000 worth of AN fittings later and it was finally right.

“The custom wiring harness proved to be a bit of a head-scratcher but with the guidance and schematic provided by Jeremy Cupp of L.C. Fabrications we had this unique build running like a song.” Now he could put those new metal shaping tools to good use and doing what he does best, Dustin handcrafted a stunning set of tins. The fuel tank and that incredible front cowl are both shaped out of aluminium, their glorious lines allowing the crazy engine configuration to take centre stage, while still making a big impact of their own.

The minimalist cafe-style tail is all steel and one of Kott’s signature pieces, topped in a classically upholstered leather seat. For a bike with the sort of mechanicals that could have come out of the garage of a crazy ton-up boy back in the day, the controls are spot on; clip-ons with only the bare necessities and a set of custom made foot controls to get the rider’s feet in the right position.

Finally, the black paint with gold striping was laid down and while the engine will rightly prove to be the talking point, the overall result is another killer Kott creation that oozes classic style.