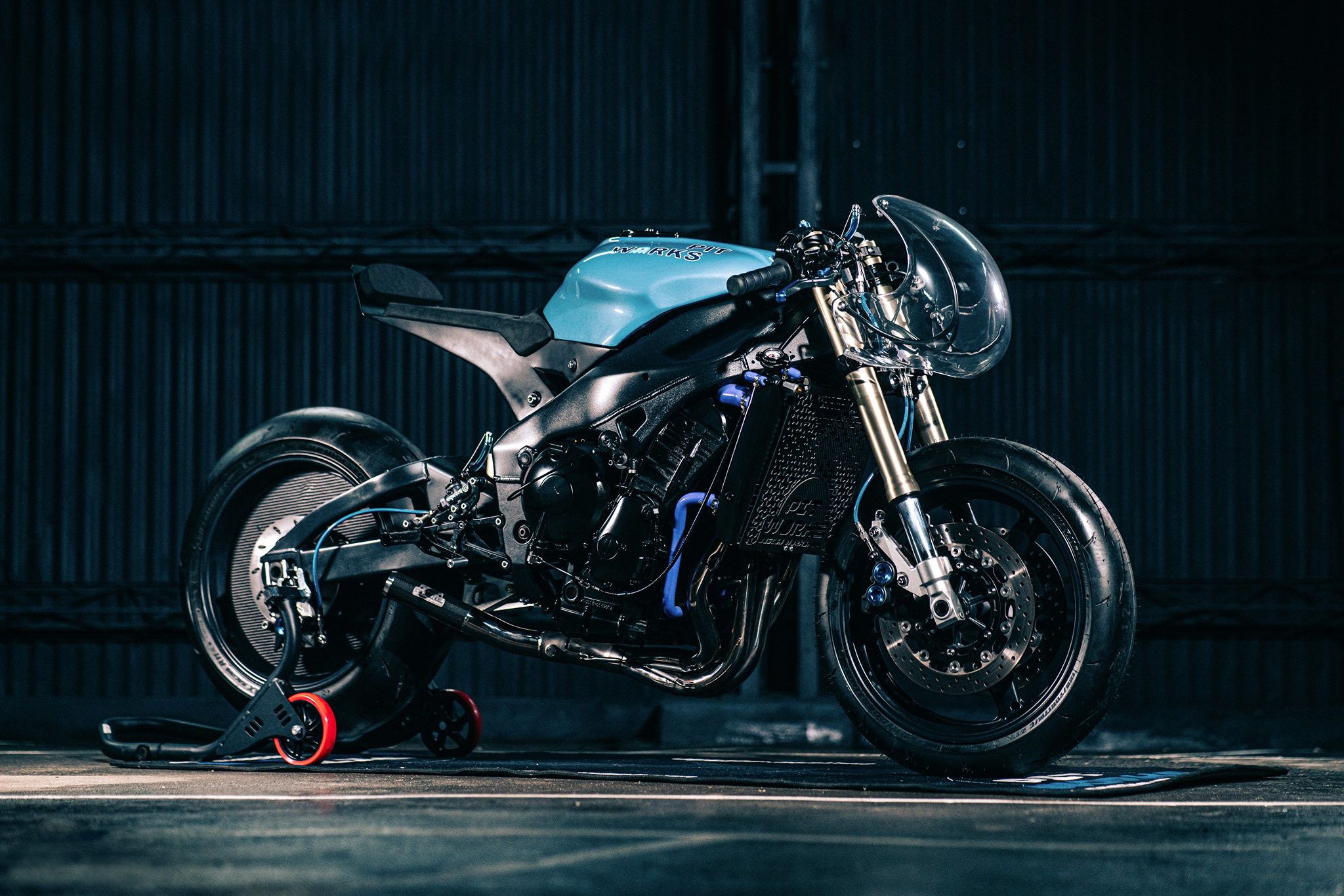 They’re the Mac Daddy of the bike world, the king of kings, the ones that reign supreme, and yet if you search through most custom bike magazines and websites you’ll find very few factory superbikes have gone under the knife. There are some obvious reasons why, their prohibitive cost, the fact they already do most things insanely well, and the increasing complexity of their electronics. But that just means slightly older versions, still packing endless performance, should make good candidates for a custom. And Taiwan’s PIT WORKS Design has gone all out to make the case, with this stunning Neo-YZF R1 called ‘Blue Ghost’.

It is not as if we don’t value the factory superbike in the custom scene, we’ve been pinching their forks and front ends for years, taking advantage of their big brake packages, and even utilising their alloy swingarms and rear shocks. But taking on the whole box and dice as a project, that is a rare event. But as the superbikes of 10 or 20 years ago become eminently more affordable, their unparalleled performance becomes hard to ignore. It was all of these things and more than convinced Ted, owner of PIT WORKS, to find a 1998 Yamaha R1 and give it a go.

“I call this bike the Blue Ghost and its inspiration comes from the bad guy ‘Inky’ in the 80s classic game Pac-Man. His “scatter” mode is very consistent with the image of a 1998 YZF R1. Extremely flexible and Extreme performance.” But first, the Blue Ghost had to emerge from a haunted house of horrors as the R1 had been previous ‘modified’ and not in a good way. When Ted picked it up, someone had hacked the subframe off, left wires exposed, and generally treated the bike in a rather poor and uncaring fashion.

Starting with the famous Deltabox II frame and swingarm, they’ve both been cleaned up, any dents and dings repaired, and then finished in a custom coat of black. “The sub-frame is made of steel shield instead of the original tube frame. Using CAD simulations to retain all the space required of electric equipment. It combines the new digital design and traditional English wheel production,” Ted tells us. Inside, the battery box is a 3D printed item, so too the CAD-designed area for the electronics, with the foam covered seat base made from hand laid fibreglass.

“The paint of the sub-frame uses light and flat to present a large number of geometric gradient shapes. It is also applied to the carbon fiber CNC water tank protection.” But it is the fuel tank that is more than meets the eye. Sharing similar lines in some areas to the factory metal, it is in fact a two-piece part with the go gas itself sitting inside a strong steel cell. On the outside, the skin starts life as the top section of the factory R1 metal and then has been slowly transformed to better fit the lines of the new subframe.

“My enlightening teacher, Nic (Italian industrial designer) said ‘This bike’s original design was very elegant and beautiful, you should seriously think about how to redesign it.’ So for this bike, I kept some of the fuel tank shape and some classic elements of the first-generation superbike YZF R1.” And while the tank certainly does that and takes on elements of the endurance racing versions with the machine aluminium filler, the front end has taken on a life of its own. The mould for the front fairing was first designed in CAD with the final transparent part entirely 3D printed.

It gives the bike an almost alien-like appearance and the blue of the tank shines through the clear material. To secure it to the bike, the front subframe is hand-rolled steel and it all works beautifully together. The paint of course would prove to be a crucial component, capturing the essence of “Inky”, with the little character incorporated into the logo design and the main colour selected to replicate his appearance. Further adding to the unique vibe are the solid carbon fibre wheel cover at the rear and the twin headlights that illuminate like eyes beneath the front fairing.

Of course at its heart, the R1 is a pure performance machine and this part of the build has not been ignored. Inside the factory airbox sits a set of four purple velocity stacks, while the engine booms out of the factory headers and a tiny carbon end can. A custom-crafted radiator cover, blue cooling hoses and brake lines keep the theme flowing. With Ted finishing out the build with a machined triple clamp to accept a Koso speedo, and fitting the bike up with some race-spec switchgear.

The PIT WORKS design has a look of its own, this Blue Ghost will not float quietly by, and then open the taps and you have endless performance to enjoy. It’s one hell of a package and with early superbikes now so plentiful, it should inspire many others to give one of the raging beasts their own unique take.