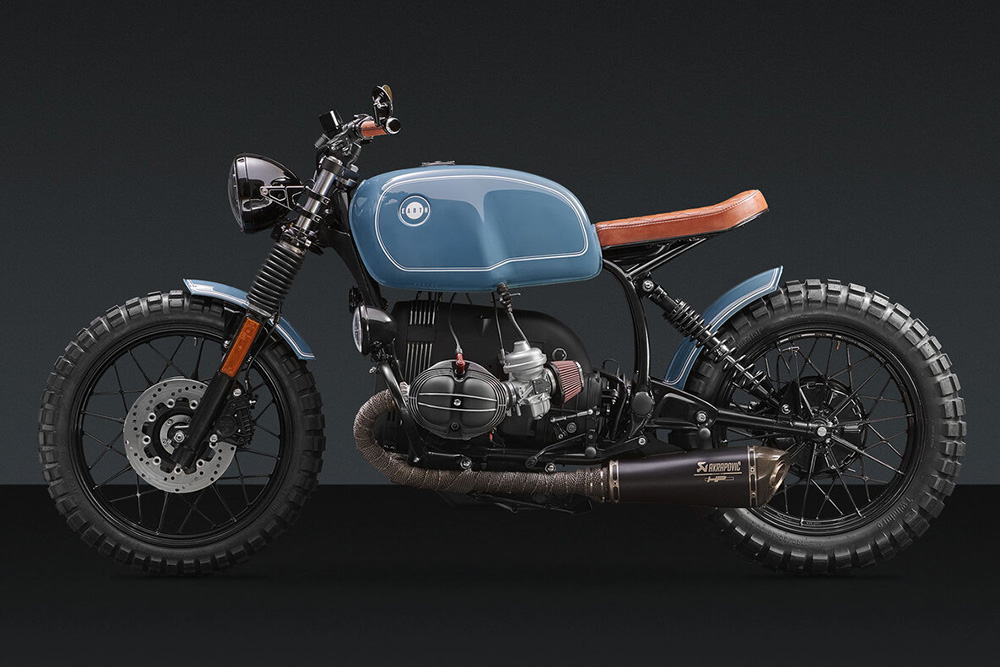 The world of two-wheels is as often philosophical as it is purely mechanical, and I don’t refer simply to the runaway success of books like ‘Zen and the Art of Motorcycle Maintenance’. Our choice of motorcycle is as much determined by our adherents to values, faith, existence and reasoning, as it is whether the darn thing is any good or not. Surely not all motorcycle gang members actually favour the Harley Davidson over any other make, but here belonging trumps function, tribe tops individualism. So to pose a philosophical question, how long is the truth, the truth? Because despite their immense abundance, Earth Motorcycles have arrived to prove once again that the BMW R remains the best platform for a custom motorcycle as they unveil their latest build ‘Budzogan’.

Of course, I should have added “arguably’ before declaring the BMW Boxer the best, as we could all contend there are other makes and models more befitting of the title. But in this moment in time, and over recent years, the BMW R has simply reigned supreme. And the last time we caught up with Ales and Vlad of Slovakia’s Earth Moto, they’d unveiled another BMW R that had been met with a comments section, rightly, filled with superlatives. So, to take on the challenge again and see if they could please both the world and more importantly their client, they picked up a 1983 R100 and got to work.

Their own philosophy on the process is simple, ‘Dream it, Build it, Ride it’ and on this particular build, it was the one in the middle that would prove the most difficult. Firstly, because after crafting out such a success last time they’d set themselves an all-mighty high bar, and secondly because the donor bike for this build was a little bit shit. So one area that has received far more attention than most Rs is the running gear, and it all starts with a complete rebuild. Stripped back to a bare block, it along with the gearbox and final drive were blasted to give them an as-new finish, free from years of accumulated grime.

Into the engine goes new piston rings, valve guides, gaskets, seals and grommets, and a cam chain kit. The starter and timing mechanism have been overhauled, the clutch plate replaced and a new engine cover bolted on before the whole thing was painted in black cerakote and the cooling fins file finished. The Bing carbs have been given the mother of all makeovers, re-jetted, filtered with K&N pods, and outfitted with a new stainless choke assembly. Before the exhaust was made from all new header pipes that finish out with a very modern Akrapovic muffler.

Now with such a beautiful lump, they had to get the rest of the bike up to the same standard and it all starts with the smoothed out chassis, with a custom subframe and a new side standard to match the intended height. It’s all coated in hard-wearing black powder and piecing the frame back together starts the process of replacing every last nut and bolt with stainless items. Into the headstock goes a modified stem guided by new bearings, with the top yoke CNC machined aluminium and held down with a custom stainless nut.

For the all important suspension, the new yoke now clamps a set of internally and externally shorten forks, that are taken down 5cm, and the lower legs powder coated to match the frame. To keep up with them on any road surface you can name, new black YSS 410mm rear shocks get the job done at the back end. The factory wheels have been given a refresh to have them looking better than new, but unlike their last R that wore true Avon road rubber, this beast has its rims wrapped in the ever popular Twinduro tyres from Continental.

But as much as I drool over this BMW’s functionality, there is just no getting away from how beautiful the bodywork is.  The factory tank has been panel beaten to perfection and then treated to a new set of fuel taps. The hand made guards are just as arrow-straight, with the rear mounted like a more modern hugger style. And then it was out with the paint gun to lay down that brilliant blue, with contrasting white lines, all looking good enough to eat from. The diamond-stitched seat in real leather merges perfectly with the metal and is the handy work of militaseats.cz.

Helping to keep the new lines clean is the handbuilt wiring loom that is centred on a Motogadget M-unit Blue with alarm and keyless ignition. An Aliant LiFePo4 14Ah battery and regulator to suit get the call up, and the lighting is a mix of quality components from Motogadget and Highsider. There are so many clever touches it’s impossible to list them all, from the custom alloy foot controls, to the modernised braking package and the adventure inspired engine guards with a single blacked-out spotlight.

But what is clear, is that in crafting another incredible creation from the basis of a BMW R, Earth Motorcycles have put another checkmark against the models claim to be top of the pops, and it’s on the rest of the contenders to come and try and claim the crown.